“The Worst We Have Ever Seen”: Doctors Racing Against Time to Treat Pellet Blindings 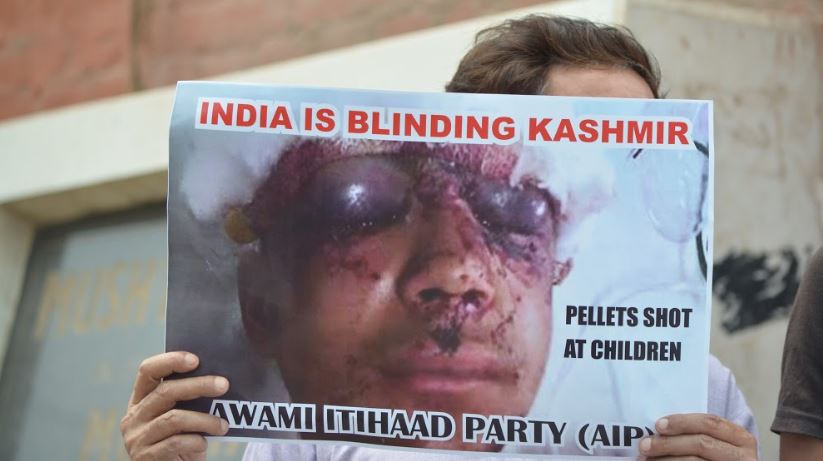 SRINAGAR: With the eye injury cases swelling at the Srinagar’s SMHS hospital it is a race against time for the surgeon to provide timely treatment to the victims.

Since Friday evening when the hospital received more than hundred firearm injury cases, the ophthalmology department alone admitted 70 persons with pellet injuries to one or both eyes.

“It was the worst that we have ever seen. In less than 24 hours we conducted surgeries of around 60 persons with eye injuries,” said a senior doctor.

From July 9, following the killing of Hizb commander Burhan Wani, the department as per official records, has admitted more than 330 persons with ocular injuries resulting from pellets.

Though most of the injured have been provided the preliminary treatment, the challenge for the surgeons at the ophthalmology department is to conduct timely vitrectomies (retinal surgeries).

The doctor said almost all the persons with eye injuries need to undergo the retinal surgeries which can improve the chances for them to regain the vision in damaged eye (s).

“Though we have conducted the vitrectomies upon more than 80 persons the growing rush of the victims is forcing us to delay the continuation of the second-line treatment of the admitted patients…it is a concern but we are giving our best,” said a senior surgeon.

He said in view of the large number of cases the department decided to keep the eye-operation theater functional on Sunday as well.

“Except for few hours when the theater was fumigated to avoid any chances of infection, we have been continuously conducted eye surgeries from Friday late afternoon,” said the surgeon.

The challenge for the department has also increased since there are only three retinal surgeons at the hospital.

Meanwhile the summer capital Srinagar and other major town of Kashmir remained under strict curfew on Sunday, a day after at least 60 people sustained injuries due to pellet and other firearm across Kashmir, most of them from Anantnag.

“The Worst We Have Ever Seen”: Doctors Racing Against Time to Treat Pellet Blindings