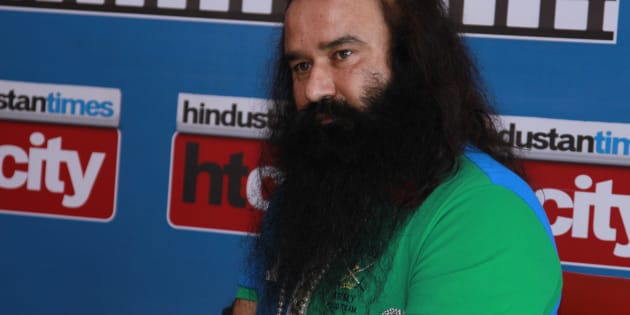 HINDUSTAN TIMES VIA GETTY IMAGES
Spiritual leader and the head of the India-based socio-spiritual organisation Dera Sacha Sauda, Gurmeet Ram Rahim Singh during an exclusive interview for his upcoming movie MSG: The Messenger of God at HT Media Office on February 2, 2015 in New Delhi.
ADVERTISEMENT

The widespread violence, arson and open threat to constitutional institutions and public life by the irate followers of convicted godman-turned-rapist Gurmeet Singh didn’t look like a spontaneous eruption of devotional anger, but a lab-test of religious mob-strength.

It was doused in a day, but not before it inflicted a hefty death-toll, considerable damage to public and private properties, straining the capacity of state institutions and scaring the public no end.

The marauding mob was Singh’s protection from the law for his alleged crimes; but how did the mob reach such a scale of power and perversity and how did he build and sustain it? This is a question ordinary citizens and civil society must sit up and ask now because the Dera Sacha Sauda chief is just one of the new mob-leaders who have built formidable religious-spiritual-industrial complexes under the patronage of political parties, their governments, and the media.

Of course, Gurmeet Singh is not alone in this empire-building. There are many like him across the country.

The template has been there from time immemorial: round up a few disciples with yoga and pop spirituality and establish institutions in sectors such as education and health in which the government is weak and the cover is maximum, and raise the following to a transnational cult that begins to self-breed. Politicians, industrialists, and money-bags invariably turn up at some stage.

At a certain critical mass, it becomes an invincible complex because it also serves as vote-banks, pressure-groups, consumers, and institutions. In fact, Singh had reached this stage a long while ago and that remained his insurance policy for several years until an upright officer in the CBI refused to give up on the criminal complaints against him.

Seemingly, his empire, spread over many states, is so vast that dismantling it or bringing it under some semblance of rule of law will be very difficult: there are tens of thousands of people, schools, colleges, hospitals and other institutions that make a parallel universe, where he could abduct, enslave, rape and kill people with impunity.

Of course, he is not alone in this empire-building. There are many like him across the country.

Clearly, at the core of their power is their organizational strength and its most critical support comes from both the central and state governments through tax exemptions. The money they make through their institutions — whether by peddling designer-yoga, hug-reliefs, or consumer goods — is tax-free if it’s marked for charity. According to the Income Tax Act 1961, all they need is to register a trust showing religious or charitable intent. Contributions to them are also tax-free, not just for them, but also for the contributors.

It’s the widest possible tax exemption blanket that any country can give. So a Baba Ramdev can make thousands of crores selling FMCG (fast moving consumer goods) but doesn’t need to pay any tax because all the money it makes is apparently meant for charity. The 2006 amendment of the IT Act, in which “yoga” was added as a charitable purpose, made it more pervasive. In fact, the Income Tax Appellate Tribunal’s (ITAT) order that exempted Ramdev’s Patanjali from taxes comes from his yoga credentials.

The 2006 amendment of the IT Act, in which “yoga” was added as a charitable purpose, made it more pervasive.

No wonder that Sri Sri Ravishankar, who is also into selling FMCG, besides his core business of “Art of Living (AOL)” is planning to open 1000 retail stores across the country. Ramdev broke new ground in industrializing the spiritual-merchandise and is growing faster than the multinational FMCG brands on the strength of the tax-exemptions and evidently Ravishankar doesn’t want to be left behind even as the big brands are complaining about the denial of a level playing field.

Besides the tax exemptions, (The same ITAT order also said that “corpus donations are not taxable, even in circumstances where the trust is not eligible for I-T exemption”) what also strengthens them is that nobody cares to ask how Patanjali, or now Sri Sri Ravishankar, could scale up their industrial production so fast, that too with such a diverse range of products. Is this all that research for consumer goods take? Is it that simple?

In 2014, the Comptroller and Auditor General found more than 200 irregular tax exemptions given to various trusts and one of them was the Mata Amritanandamayi Math, another huge spiritual-industrial complex in Kerala, which too was a target of serious allegations by an American devotee and local media.

It may be safely surmised that all godmen and god-women benefit from tax exemptions because of the provisions of the 1961 IT Act, and the 2006 amendment that inserted yoga into the realm of charity — ironical in a country where even scrap-pickers are asked to pay 18 per cent GST.

While the centre does away with the income tax, the state governments give a range of incentives such as free or subsidised land, licenses to run institutions without due diligence, permissions that are otherwise illegal, and help in their run-in with the law. It’s not just Singh, who enjoy(ed) their patronage, but every spiritual/religious guru with a considerable following because of their political capital.

Interestingly, what we are witnessing now is a time-tested collaboration between religion and rulers. As eminent historian RS Sharma had noted, after the Mauryan empire and the Gupta dynasty, rulers tended to grand vast tracks of land to Brahmans with administrative authority. It was not for support to their military expedition, but for maintaining social peace through the caste system, especially in backward areas, while they went about expanding their fiefdoms. The caste-based social order, controlled by the Brahmans, meant easier rule.

The godmen and godwomen of India also maintain such social control over their followers. When these numbers make sense in electoral politics, they become vote-banks and magnets for political parties. They can help win elections and make or break governments as Gurmeet Singh demonstrated. The godmen and god-women are the Brahmans of our times. It’s also a no-brainer why bulk of their followers are caste-Hindus.

Religious activity, charity and yoga — these three keywords are good enough to build a Singh-style empire under state patronage. The only way to curb this threat to society is by withdrawing state patronage or in simple terms, tax exemptions. Charity should not be a State-sponsored cover for subverting constitution and rule of law. These are dangerous empires that need to be disincentivised and dismantled.