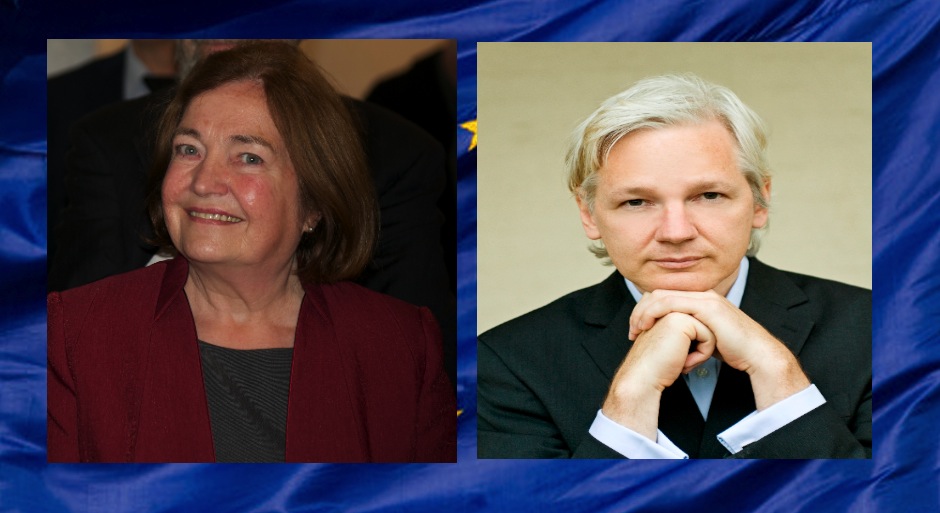 Listen to a reading of this article:

Julian Assange suffered a mini-stroke in October during the hearing for the US appeal of a UK court’s ruling on his extradition case.

“The WikiLeaks publisher, 50, who is being held on remand in the maximum-security jail while fighting extradition to America, was left with a drooping right eyelid, memory problems and signs of neurological damage,” The Daily Mail reports. “He believes the mini-stroke was triggered by the stress of the ongoing US court action against him, and an overall decline in his health as he faces his third Christmas behind bars.”

“Assange was examined by a doctor, who found a delayed pupil response when a light was shone into one eye – a sign of potential nerve damage,” the article reads.

“Julian is struggling and I fear this mini-stroke could be the precursor to a more major attack. It compounds our fears about his ability to survive the longer this long legal battle goes on,” Assange’s fiance Stella Moris told the Daily Mail.WikiLeaks @wikileaksBREAKING: Doctors confirm Julian Assange suffered a stroke on the morning of his latest hearing Amnesty called this weeks ruling reversing a decision to refuse extradition a “travesty of Justice” #FreeAssangeNOW Julian Assange has a stroke in Belmarsh prison, fiancée revealsStella Moris, partner to imprisoned WikiLeaks founder Julian Assange, stands with protestors on Dec. 10 as she denounces a British appellate court’s overturning of the ruling regarding Julian Assange’s extradition to the United States.dailymail.co.ukDecember 11th 20215,731 Retweets8,932 Likes

“Assange’s stroke is no surprise,” tweeted UN Special Rapporteur on Torture Nils Melzer in response to the news. “As we warned after examining him, unless relieved of the constant pressure of isolation, arbitrariness and persecution, his health would enter a downward spiral endangering his life.”

Melzer examined Assange with medical experts in 2019 and published a report with the United Nations Office of the High Commissioner for Human Rights saying that “Mr. Assange showed all symptoms typical for prolonged exposure to psychological torture, including extreme stress, chronic anxiety and intense psychological trauma.”

The following year Melzer put it even more bluntly, writing that “Julian Assange displays the typical symptoms of psychological torture. If he doesn’t receive protection soon, a rapid deterioration of his health is likely, and death could be one outcome.”

In October of this year Melzer put it blunter still, saying, “If he should die in prison he has effectively been tortured to death. That’s the reality of it. And I’m not exaggerating. I’ve been working in areas of war. I have a long history of visiting prisoners. I visited Julian Assange, and I had two specialized forensic doctors with me and a psychiatrist evaluating him for four hours, and we all independently from each other came to those conclusions. At that time his life was in danger. And sure enough, a few days after we left the prison he entered a downward spiral.”Nils Melzer @NilsMelzerAs #Assange clearly was not medically fit to attend his own trial through videolink, how can they even discuss whether he is fit to be exposed to a show trial in the US, a country that refuses to prosecute its torturers & war criminals but persecutes whistleblowers & journalists? December 12th 2021632 Retweets1,301 Likes

They are killing Julian Assange. Experts agree that they are killing him. Assange’s stroke is just another item on the mountain of evidence we already had for this.

The US-centralized power alliance is murdering a journalist, as surely as the Saudi regime murdered Washington Post columnist Jamal Khashoggi. The only difference is that Khashoggi was killed quickly by live dismemberment via bone saw while Assange is being killed slowly by lawfare.

The Assange extradition case is just the western version of the bone saw treatment. It’s no less barbaric, cruel, vicious and tyrannical; it’s just more media-friendly and better-suited for the Nice Guy Fascism of the western branches of the globe-spanning empire which rules our world. The US, UK and Australian governments are not hacking Assange to pieces in their coordinated campaign toward his destruction, but they may as well be.

The world recoiled in horror when it learned of Khashoggi’s grizzly end, and it won’t be long before the world begins recoiling in the same way to what has been done to Assange as well. Our society is becoming rapidly more conscious; we’re already ashamed of things we thought were fine just a few years ago. We realize now that men like Harvey Weinstein are predators and the Hollywood starlets people used to criticize for “sleeping their way to the top” were actually victims of assault. We realize now it was wrong to crack jokes about the intern Bill Clinton sexually abused. We realize that the “Leave Britney alone” kid everyone made fun of in 2007 was actually on to something. We realize now that it’s wrong to make people feel bad about their sexual orientation or sexual identity. Many movies made even ten or fifteen years ago are uncomfortable to watch now because of how unconscious they were of power dynamics we all see much more clearly now.

And, whether Assange survives this slow-motion assassination attempt or not, it won’t be long before society fully understands that their government and its allies actively conspired to murder a journalist for telling the truth.

Why French newspaper refused to run PM Modi’s interview
Bitter Pill: Why Medical Bills Are Killing Us #healthcare
The grammar of politics and anarchy
Health consequences of crowd-control weapons