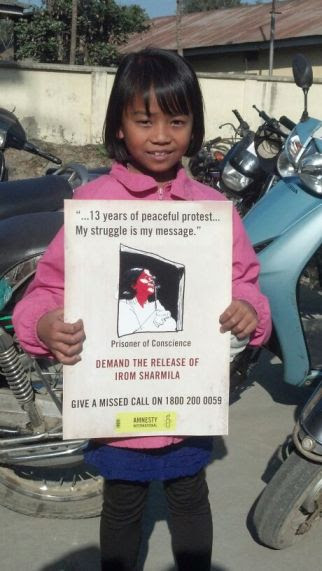 Over 16,000 people have supported an Amnesty International India campaign seeking the immediate and unconditional release of human rights activist and Prisoner of Conscience Irom Chanu Sharmila.

“The governments of Manipur and Delhi should heed the thousands of voices urging them to drop all charges against Irom Sharmila and release her immediately,” said G. Ananthapadmanabhan, Chief Executive of Amnesty International India.

“Irom Sharmila is a Prisoner of Conscience, detained solely for the peaceful expression of her beliefs, and her time in custody is a continuing reminder of India’s intolerance to dissent.”

Irom Sharmila has been on a prolonged hunger strike for the last 13 years, demanding the repeal of the Armed Forces (Special Powers) Act (AFSPA).

Irom Sharmila is being detained in the security ward of a hospital in Imphal, the capital of Manipur, where she is force-fed a diet of liquids through her nose. Visitors, including her family and friends have to go through a lengthy process of obtaining permission from the Manipur government.

On 30 October 2013, India’s National Human Rights Commission directed the Government of Manipur to immediately remove the restrictions on access to Irom Sharmila , calling them a “breach of India’s obligations under international human rights standards and principles, and a grave violation of human rights”.

The Commission acknowledged that Irom Sharmila was being detained solely for the peaceful expression of her beliefs, and said that the Manipur government was “trying to break her spirit through this enforced isolation, for which there is no judicial mandate”.

“Thousands of people have acknowledged that Irom Sharmila’s hunger strike is not an attempt to commit suicide but a protest against human rights violations,” said G. Ananthapadmanabhan. “Authorities must not use charges of attempted suicide to deflect attention from the important issues that Irom Sharmila is raising at a huge personal cost.”

In February 2012, the Supreme Court of India observed in its ruling in the Ram Lila Maidan Incident case that a hunger strike is “a form of protest which has been accepted, both historically and legally in our constitutional jurisprudence.”

Speaking to Amnesty International India in September 2013, Irom Sharmila, inspired by Mahatma Gandhi’s philosophy of non-violence, said, “My struggle is my message. I love my life very much and want to have the freedom to meet people and struggle for issues close to my heart.”

Amnesty International India’s public campaign seeking Irom Sharmila’s release was launched on 2 November 2013, and has been supported by groups and individual supporters across the world.

Irom Sharmila Chanu began her hunger strike in November 2000, after the killing of 10 people in Manipur by the Assam Rifles (a paramilitary force) in Malom, Imphal. She has consistently demanded the repeal of the AFSPA.

Irom Sharmila has never been convicted of attempting to commit suicide. However, as the offence is punishable with imprisonment for up to one year, she has been regularly released after completing a year in judicial custody, only to be re-arrested shortly after as she continues her fast.

Amnesty International and several other rights organizations continue to demand the repeal of the AFSPA.

The AFSPA, which has been in force in parts of North-eastern India since 1958, and a virtually identical law (The Armed Forces (Jammu and Kashmir) Special Powers Act, 1990) in force in Jammu and Kashmir since 1990, provides sweeping powers to soldiers, including the power to shoot to kill in certain situations and to arrest people without warrants. The Act also provides virtual immunity from prosecution for security personnel, by mandating prior permission from the central government, which is almost never granted.

The AFSPA falls short of international human rights standards, including provisions of treaties to which India is a state party; and is inconsistent with India’s international legal obligations to respect and protect the right to life, liberty and security of person, to freedom from torture and other ill-treatment, and to an effective remedy.

A number of Indian bodies, including the Second Administrative Reforms Commission, the Jeevan Reddy Committee and the Prime Minister’s Working Group on Confidence-Building Measures in Jammu and Kashmir have also urged the repeal of the law.

The Justice Verma Committee, set up to review laws against sexual assault, said in January 2013 that the AFSPA legitimized impunity for sexual violence. The Justice Santosh Hegde Commission, set up by the Supreme Court in January 2013 to investigate cases of extrajudicial executions in Manipur, described the law as “a symbol of oppression, an object of hate and an instrument of discrimination and high-handedness.”