Threatened Muslim identity to systematic ethnic cleansing: where does one draw the line? 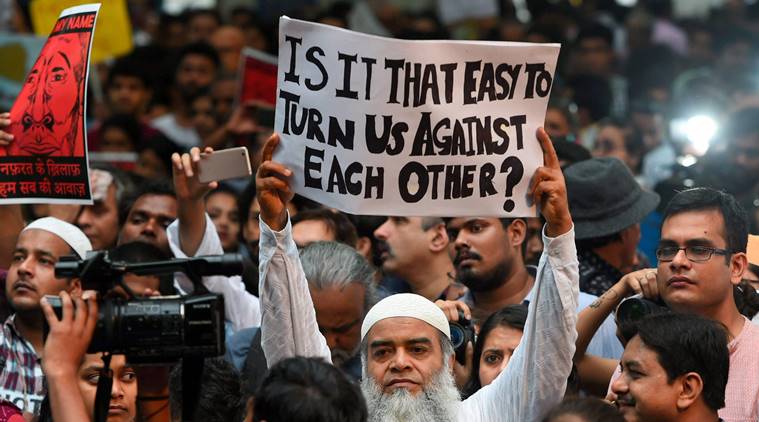 New Delhi : Citizens hold placards during a silent protest " Not in My Name " against the targeted lynching, at Jantar Mantar in New Delhi on Wednesday. PTI Photo by Shahbaz Khan(PTI6_28_2017_000202B)

BJP is religio-centric government, aligning its goals and actions towards strategically marginalising Indian Muslims. Be it abrogation of Jammu and Kashmir’s special status, building a Ram temple on the disputed grounds where centuries old Babri Masjid once stood, or the implementation of a uniform civil code, to name a few. Beef ban was followed by indiscriminate anti-Muslim violence, as the government and police became silent spectators and, in some cases, even conspirators.

Triple talaaq bill is more of a tool to wind up on Muslim men, then to liberate Muslim women. More than meting out justice, it is an attestation of the fact that under BJP governance, Muslim personal law has no credibility. Gujarat holocaust and Babri Masjid demolition accused, as well as those who publicly declared their resentment for Muslim presence in India, are now in pivotal positions, enjoying peak of their political careers.

We are all too familiar with regular rechristening of streets, areas and cities that sound even slightly ‘Muslim’ or are named after a Muslim legend. To top it all, comes citizenship amendment act (CAA). A bill based on religious merit in a secular country. According to the Indian government, it is ‘refugees’ versus ‘infiltrators’, and this is, respectively, defined by being ‘non-Muslim’ versus ‘Muslims’. Singling out a religion as impermeable to persecution, is a manifestation of the fact that how narrow-minded BJP is when it comes to Muslims.

Notwithstanding, NRC will also have many far-reaching consequences, should it come into effect. An average Indian, who doesn’t have all the documentation and paperwork in order, will undoubtedly be succumbed to an unrelenting culture of bureaucratic delays, harassment and bribe extortion. Assam’s six-year struggle with NRC is a perfect example. In short and quite paradoxically, the public who was instrumental in bringing BJP to power, is now at the mercy of the same government to earn its rights to citizenship.

This is a lesser evil.

Far graver concern is prospective abuse of NRC to serve Hindu nationalist interests. An estimated 120 million voters were missing from voter’s list in 2019 elections, many of them on wrongful grounds. What, then, is the guarantee that the same government will not exercise its ‘discretion’ to declare someone stateless? Our honorable home minister has emphasized and maintained that when NRC will be implemented, immigrants who are Hindus, Sikhs, Christians, Buddhists, Jains and Parsees will be protected through CAA. If that is for immigrants, then Indian nationals belonging to these religions are innately safe too. Consequently, at the receiving end will be no other than the Indian Muslims. They will be held up in detention centers, persecuted and, at the very least, stranded for indefinite periods.

Foreseeing rights of minorities jeopardized, students from Jamia Milia Islamia (JMI) and Aligarh Muslim University (AMU) staged peaceful protests. Brutality suffered at the hands of police, as a result, was totally uncalled for. Students are agents of change and future of the country. Their suppressed voices reflect unprecedented contamination of India’s democratic fabric. Debate about effectiveness of CAA and NRC is one thing. Threatening the security and integrity of Indian youth is another. Police continued to unleash its wrath on unarmed protestors and on several occasions destroyed private and public property. Despite protests across all over India, most such incidents happened in Muslim dominated regions. It is not mere coincidence. As I write, twenty-five lives have been lost so far in instigated clashes, and the government haven’t as little as presented an apology. Evidently, police and RAF are working under their patronage. Is a legislative decision more sacred than human life even amidst nation-wide protests? How many more lives and what degree of civil unrest will qualify for a revaluation of government’s communal policies?

Each small development in the name of Hindutva is like a puzzle piece, build upon infringement of minority rights, which when all put together will eventually complete the picture of a Hindu Rashtra. Behind this façade, Muslims will somewhere lose their equitability status as Indians. While I must commend our government for living up to its ideology of hard-line Hindu nationalism, I cannot help but worry about the future of Muslims in India. A typical Indian Muslim is living in a perpetual state of fear. Fear of intimidation for appearing outrightly Muslim. Fear of harassment for voicing opinion. Fear of discriminatory persecution for opposing oppression. Our integrity is at stake as Indians. Our future is at stake as Indian Muslims. Key question that people of conscience should prod is: in building a Hindu Rashtra, what vision does the current government have for Indian Muslims? Except for Kashmir, Muslim population across India is sporadic. It will be a big logistical challenge to corner them all into a single territory and colonialize them. Certainly, they can not also expect them to migrate to Pakistan. If this was truly a solution or salvation to a good life, our grandfathers would have taken this decision decades ago when they had the means and opportunity. Their love and attachment for India held them back. Not only did they participate in India’s freedom struggle from the British, they also paid their loyalty to their mother country by forsaking migration to a land created in the name of Islam. Little did they know that there will come a day when their progeny will be labelled ‘anti-nationals’ and told to ‘go back to Pakistan’. The only option then left is mass extermination. To this end, detention centers that are being built across the country make perfect sense. NCR is apparent agenda. BJP’s hidden agenda is to subtly, not outrightly, break the backbone of a community. Little by little, step by step.

Even as we are stripped off the status of unreservedly calling India our home, it may well serve as a reminder: we are proud to continue the legacy of our forefathers who didn’t believe in divide and rule and fought for rights to their country of birth!

Author info: Saima Munawwar is a petrochemical engineer (AMU, Aligarh) and a PhD in solar energy (Edinburgh Napier University, UK). Mother of four bright children, aged between 4 to 11. Six years + experience in academia in gulf countries (UAE and Saudi Arabia). Currently, a stay-at-home parent, based in Ottawa, Canada. An advocate of social and environmental justic