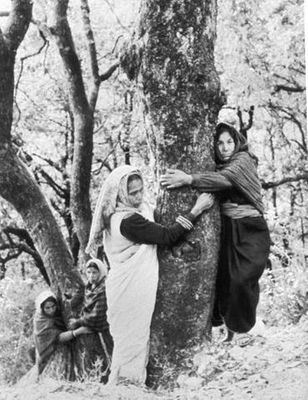 Gaura Devi, a peasant woman from the Garhwal region led a group of women to hug trees for saving them from being felled as part of 'Chipko movement' on March 26, 1974. This non-violent struggle is said to have given birth to the modern Indian environment movement. A form of the movement was first seen in the 18th century.

The Chipko Movement started off under the leadership of Gaura Devi, a middle-aged Bhotia woman, who managed to mobilise about 30 women of her village to step out of their homes and protect the green cover of their lands with their lives. In the early 1970s, when industrial giants attempted to spread their tentacles into the forest lands of Uttarakhand (then Uttar Pradesh), they were met with one of the biggest environmental movements in Indian history. The Chipko Movement started off under the leadership of Gaura Devi, a middle-aged Bhotia woman, who managed to mobilise about 30 women of her village to step out of their homes and protect the green cover of their lands with their lives. Challenging the men to shoot them down before touching the trees, they forced them to retreat. The movement was soon acknowledged by the government of India, and they forced the company to withdraw from the region.

The Chipko Movement was based on an ideology of protecting the environment with one’s blood and bones. Historically speaking, it had been inspired by a movement that had sparked off in 1730 AD in a small village close to Jodhpur in Rajasthan. When the ruler of Marwar, Maharaja Abhay Singh, ordered cutting down of the local Khejri trees for the sake of building his new palace, Amrita Devi, along with her three young daughters, laid down their lives in protest. They soon inspired large sections of their community to follow in protest. In the ensuing days, more than 350 lives were lost as the king’s men mercilessly chopped down bodies that were shielding the valuable Khejri trees with complete devotion.

On March 26, 1973, Gaura Devi and the other women in the Reni forest region of Uttarakhand followed the footsteps of Amrita Devi, and in the process laid down a legacy of environmental protection that was one of a kind. The Chipko movement of 1973 soon inspired many such agitations of ecological protection. In the immediate aftermath, it soon spread to other sub-Himalayan regions like in Gopeshwar (1975), Bhynder valley (1978) and Dongri Paintoli (1980).

In the following decades, however, the movement found itself being echoed in varying capacities in large parts of India and the world. Here are three such environmental movements which were inspired by the Chipko movement.

On September 8, 1983, the environmental activist Pandurang Hegde initiated a revolt against the agricultural practice of monoculture, which entailed the growing of a single tree in large areas. Appiko, which in the local language meant ‘to hug’, was a method that Hegde owed to the Chipko movement and actively propagated in his region through local folklore. Through the non-violent practise of hugging trees in order to prevent them from being felled, soon became part of the local culture in the region and overtime played an instrumental role in saving a rather eco-sensitive habitat of the Western Ghats.

Campaign to save trees in North 24 Parganas (West Bengal)

As recent as April 2017, the Chipko Movement was yet again replicated by a group of young boys and girls in West Bengal. When the local administration decided to cut down close to 4000 trees on the NH112 to turn the two-lane highway into a four-lane one, hundreds of students protested by forming mini human chains around the trees, protecting them from the axe of the government.

In 2009, the Japanese too followed the Chipko way, when the local population staged a strong protest against the building of a tunnel near Mount Takao. They too adopted the tree-hugging method to resist the agenda of the local administration

Green energy from blue sea
'Why is the government afraid of me? I am 90% disabled... But I think, I write': GN Saibaba
BRD Hospital Tragedy: Dr Kafeel Khan Not Well but Jail Admin not Listening, Says Wife
Bahrain will look into conduct of diplomat accused of molestation