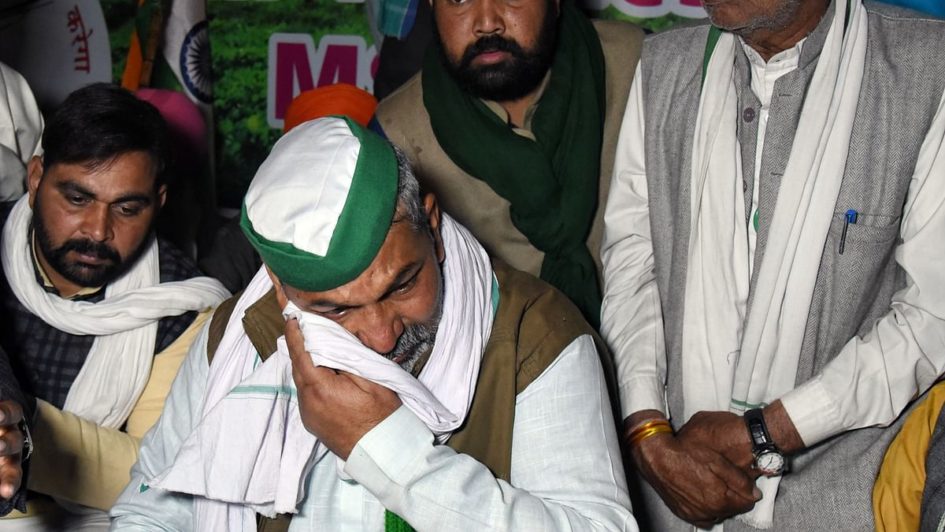 Two achievements of the ongoing peasant movement in opposition to the three agricultural laws which have transformed this movement into nothing sort of exemplary are: carving out a space for democratic resistance; and expanding awareness of the ill effects of capitalism pushed through policies of privatization-corporatization.

These two achievements of the peasant movement contain special significance in view of the dictatorial attitude of the present government and in the face of its organized manoeuvrings to discredit every adversary citizens/organizations and blind race on the path of privatization-corporatization. Of these two achievements, the second one is more significant. India’s democracy lives on despite all its shortcomings.
There are occasions of growing and shrinking space for democratic rights in it. The peasant movement has, for the first time, at least warned the ruling class and civil society against the blind moves of the government in support of privatization-corporatization.
The daily newspaper ‘Indian Express’, considered to be a supporter of neo-liberal reforms in its editorial policy, has stated this fact while writing on the January 26 incident: “Reforms cannot be imposed by turning a deaf ear to people’s anxieties and concerns, due deliberations must not be short-circuited in framing laws. The hard work of communicating and persuading on the farm laws remains to be done. The farmer’ self-goal is, by no means, anyone’s victory” (January 27, 2021).

Farmers have been struggling against these “black” laws for the last 6 months. For the last 2 months, they have been sitting on five borders of the national capital, facing the outbreak of the pandemic and severe cold. Meanwhile, more than 170 agitators have died and almost half a dozen have committed suicide. The movement has set an example at the level of operations, participation, commitment and discipline.
Most importantly, the character of the movement has been kept apolitical. Although the farmers have organized sit-ins on the borders of Delhi, the movement has expanded across the country, and has the support of important farmer unions of most states. This is the reason that despite government efforts to discredit the movement, farmers have also earned sympathy even from the supporters of three agricultural laws and corporatization of agriculture sector.

It is true that the unfortunate incident of indiscipline and violence during the tractor parade of January 26 has shaken the movement’s image. Hoisting the flag of Nishan Sahib on the Red Fort has been considered the most objectionable in public minds. The January 26 incident can be considered/analysed from three sides : from the agitators’ side, from the government (including security agencies) side and from the opposition side. In this article the incident has been considered and deliberated upon from the agitators’ side.
The ongoing peasant movement against agricultural laws has a shared leadership in the form of the Samyukt (United) Kisan Morcha (SKM). Shared leadership of the Morcha will directly be held responsible for the January 26 incident. Interacting with the government on behalf of the people and making a statement in the press is the overhead job of leadership.
The real task of the leadership is to explain the movement’s issues, programs and mode/methodology well to the participating agitators. The moral aura/strength of the movement remains intact and floating when this work is done with truth and transparency by leadership of any movement. If India is also a country of Gandhi, then this quality of leadership should not be rare.
It is true that the deviations from the route fixed under the agreement with the Delhi Police were negligible compared to the number of two and a half lakh people and about one lakh tractors attending the rally, but it is also true that at all the picketing sites people started marching ahead of schedule. It seems that the leadership of the Morcha was busy in managing their respective unions in place of discharging the responsibility of shared leadership. Whereas it was its primary responsibility to ensure that all those attending the rally proceed according to time and route at least from the points of departure.

Some agitators were initially opposed to the route agreed with the police. The dispute over the route took a lot of weight on the Singhu border on the evening of January 25. The leadership should have resolved this serious dispute at all costs. In view of the fragility of the situation, the police should have been informed directly and the public through the press.
The leadership did not clarify about their calls made before the agreement of prescribed rout asking people to reach Rajpath and Red Fort. Most of the people who had reached the picket sites the night before or the same night to join the rally, did not have proper knowledge of the route. But surprisingly the leadership did not take appropriate action in this direction despite being aware of the whole situation.
The farmers’ movement has led to the belief that their destiny is consistent with the struggle against crony capitalismThis issue of shared leadership can be discussed further in the interest of future of the movement. Within two months of the struggle, the leadership should have given the message that even though the farmers of Punjab started the movement, and also made it strong, it is not just the Punjab farmers’ movement; nor is it limited to Punjab, Haryana and West Uttar Pradesh only. With this, unions left outside the umbrella of SKM should have also been included in the Morcha. Many innovative things related to food, living and entertainment were seen at picket sites, courtesy imaginative people of Punjab.

People were got nettled as well as miraculous by these innovative moves. Study circles could have also been organized in this sequence by the leadership. Those who were named to be anti-social elements or stabbing the back of the movement were active in the movement from the beginning. The leadership should have convinced them about the spirit and mode of the movement.
The ‘Jayakara’ “Bole So Nihal” and the flag of Nishan Sahib are the things belonging to the sublime world of Guru Maharajs. Issues in the mundane world of ordinary human beings have to be raised and resolved within the scope of the constitution and with a sense of citizenship. Had this understanding been made of the senior and young citizens involved in the movement, the incident of hoisting the flag of Nishan Sahib on the Red Fort might have been prevented despite the provocation.

If the teaching and discussion camps were continued at the sit-in sites, the suffering of pandemics and cold in the open grounds away from the comforts of home and the grief of the death of loved ones could teach people tolerance instead of anger. The novelty of neo-imperialism in this ‘New India’ is that it is being imposed by the ruling classes of India, not the foreign powers. Great tolerance would be needed to counter this onslaught by own people.
I personally do not agree with the decision of holding a tractor rally in the capital; that too on Republic Day. However, what could have happened on 26 January can also be imagined. The Republic Day Parade would end at 12 noon on the Rajpath, and the tractor parade of farmers would begin in full swing at the scheduled ‘Janpath’. Had it been possible to arrange for a live broadcast at the departure points and major intersections on the way, the whole country and the world would have witnesses that. Even if the government did not repeal the laws, the movement would have reached the next stage.
If this could not happen, then leadership and activists need self-realization, not to be disappointed. The movement that has been accumulated for 6 months has not fallen, cannot fall in fact. The leadership should present the complete report of the January 26 tractor parade – what, why and how it happened – in writing to the country. The footage/photos of the peaceful parade running along the route should be released to the public. Where mistakes have occurred, the same must be accepted and apologized for, unconditionally.

The work should commence on planning and preparing for the second phase of the movement by learning from the mistakes. People across the country can be asked for suggestions and assistance if the leadership desires so. This may be the appropriate answer to ‘Government conspiracy’.

Youth activists dedicated to the preparations for the tractor parade of January 26 were engaged day and night doing their duties. They had dreamed of a disciplined and spectacular tractor parade, which broke out in one stroke. It is the duty of the leadership towards them that they and other youths should remain active in the movement with full dedication and understanding. In the next phase, there should be maximum participation of women in the movement and leadership.
A leadership collegium of all farmer unions which are opposed to the corporatization of farming should be formed at an all-India level. A detailed outline should be made in order to oppose the three agricultural laws. It is necessary to understand that those aspiring to become leaders in mainstream politics should not use the farmer movement for their personal end. Next year, Republic Day will come again. A peaceful and spectacular parade can then be organized in Delhi and/or in other parts of the country.
The repression cycle of the government has started further. Attacks are made at picket sites with the intention to evacuate them forcibly and barricades are erected to isolate them. There are arrests of several common agitators, and summons have been issued against farmer leaders. Some people are missing also.
In such a predicament, the emotional outburst of Rakesh Tikait has infused a new lease of life in the movement. However, emphasis is shifting from the core issue of agri-laws and democratic right of protest to ‘honour’. This suits the government. Government’s move to relate pro-farmer tweets of two international celebrities with its core agenda of hyper nationalism is a well thought out strategy. It seems that opponents of the government are not understanding the trap.
The worst situation may be that even after a long struggle, the peasant movement will eventually be defeated. But that would be an epic defeat. The established, power-rich and resource-rich trade unions, student unions, employee-officer unions of various departments have surrendered to the privatization-corporatization without waging a do or die fight.
The union of Indian Administrative Service (IAS) used to be considered so strong that no government could interfere in its jurisdiction. The Modi government, by defying the Union Public Service Commission (UPSC), directly transferred the people of the private sector to the rank of Joint Secretaries through lateral entry. This peasant movement has led to the belief that the destiny of the farmer is not self-annihilation, but a consistent struggle against crony capitalism.
—
*Teaches Hindi at Delhi University. This article has been distributed by the Peoples Media Advocacy & Resource Centre (PMARC)