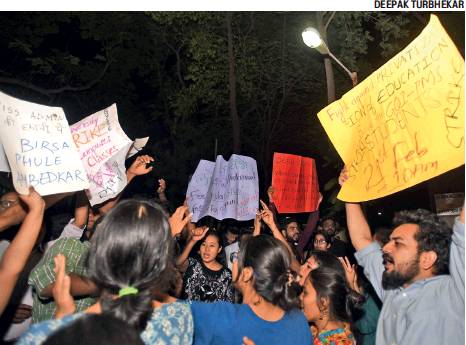 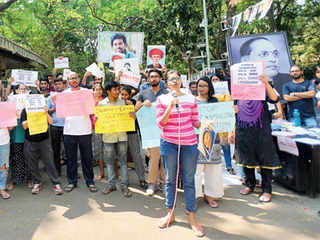 The protesting students call this an attempt to threaten them; institute says it is a routine disciplinary process.

The Tata Institute of Social Sciences (TISS) has served showcause notices to 26 students who have been protesting the withdrawal of financial aid to students belonging to socially disadvantaged groups.

In the notice served last Saturday, TISS states that the students indulged in “unlawful activities” which included obstructing movement of people and illegally occupying the registrar’s office in March, among other things. The students have been asked to respond by May 25.

Calling the allegations “false”, one of the students, who has been served the notice, said, “We do not understand why we were issued these notices as our protest has always been peaceful. They are trying to threaten us.” He said that the court has allowed them to protest peacefully when the institute had filed a case on the issue. The hearing is scheduled in June. “During our negotiations, the institute had assured us that there would be no disciplinary action against the protestors. Now, they have suddenly changed tack,” he concluded.

Other “unlawful activities” cited by the notice include: organising lectures at the main gate — where students have been camping since February 21 when the protest started — without any approval; defacing the walls of the campus with banners and painting slogans; causing disruption by blocking the entrance of administrative staff; and refusing to pay heed to appeals by institute authorities.

The general body of protesting students, in a statement, has condemned the notice. They state that the allegations have been put forth without furnishing any proof to the students. “We reject such claims made by the TISS administration, and would like to state that we have merely exercised our right to protest as mandated by the Constitution,” read the statement.

The students said that they have been taken by surprise at the turn of events as their pleas are pending before various commissions (National Commission for Scheduled Tribes, Other Backward Class, Minorities).

“In such a scenario, this notice is nothing less than an act of intimidation and aggression against the petitioners who have appealed to the commissions to get justice. The independent committee constituted by the Governing Board of the institute is yet to interact properly with students and has not come out with any recommendations to resolve the situation,” read the statement. “The notice is a move to break the protest by instilling fear and insecurity among the alreadyvulnerable students at TISS. It also indicates admin’s fear of the continuation of protest till the entry of new batch.”

CP Mohan Kumar, registrar, TISS, said that this was a routine disciplinary process. “The process kicks in when the Honour Code is violated as we have seen in this particular case. We have sought an explanation from the students after which we will decide whether there is a need for an inquiry committee.” When asked whether rustication was on the cards, he said that some of the students, who were served show cause notices, have already completed their courses.


Several students have been protesting since February to demand complete waiver from hostel and dining hall charges to Scheduled Caste, Scheduled Tribe and Other Backward Class students from all batches including the upcoming ones. TISS has contended that it has done everything it can for the students and the rest is a policy-related matter which has to be addressed by the government.