Putting the blame squarely on “anti-social elements” and Opposition parties for Tuesday’s violence, EPS claimed that they had instigated the people of Thoothukudi to give a bad name to the government.

“So far the protests were peaceful, but this time because of the Opposition it turned violent. It is because of this instigation so many people have died. And we really saddened by the deaths,” he said.

Speaking to reporters at the Secretariat, a smiling EPS was flanked by his Cabinet colleagues, including Deputy CM O Panneerselvam, ministers Jayakumar and Sengottaiyan among others.

The Chief Minister went on to say that “Amma’s government” had done everything to respect the feelings of people. He went on to elaborate that late Chief Minister Jayalalithaa had questioned the permission given to Sterlite on May 29, 2013 and had gone on to cancel the copper smelter’s permission to operate.

“NGT then gave a ruling that they can run a smelter if they follow rules. Amma then went to the Supreme Court, and this case is going on,” EPS observed, going on to add that under his tenure the Tamil Nadu Pollution Control Board (TNPCB) had denied permission to Sterlite to operate in April.  He also pointed to Thursday’s closure notice to Sterlite by TNPCB.

The CM said, “Amma’s government has followed the feelings of people. But despite this protests were held.”

Palaniswami then went on to slam Leader of Opposition and DMK’s working President MK Stalin for staging a political drama outside his office on Thursday.

“There was a meeting that was held. Everyone participated. Suddenly, Leader of Opposition (MK Stalin) got out of the Speaker’s chambers suddenly. The meeting continued and 15 minutes later we watched on news that he wanted to meet us and the CM refused to meet him.”

Claiming that Stalin had given “fake news” that he refused to meet him, EPS went on to say that the DMK leader could have given the petition to him at the meeting or raised the issue with him there.

“But because he wanted to stage a political drama, he gave fake news that I refused to meet him,” EPS hit out.

Earlier in the day, Stalin together with DMK and Congress leaders staged a protest at the Secretariat. Stalin had walked out of the Business Advisory Committee Meeting, demanding that CM Edappadi Palaniswami and DGP TK Rajendran step down from their posts for the violence in Thoothukudi.

He first protested outside the CM’s chamber, but the agitators were physically evicted by police personnel.

The DMK then held protests outside the Tamil Nadu Secretariat, led by Working President MK Stalin. “Even after deaths of 13 innocent people, no action has been taken against the culprits. The CM has become ineffective. He did not bother to visit the district and meet the people. Therefore, we demand that the CM resign immediately. DGP Rajendran must resign too,” he said.

Stalin along with other leaders were later detained by the police. 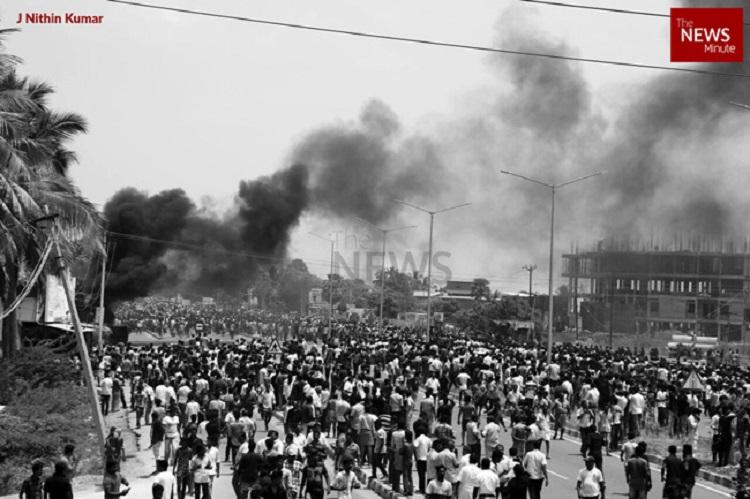 Meanwhile, in the wake of the protests on-going in Thoothukudi, telecom players have received a directive from the Chief Secretary to bar data services in three districts of Tamil Nadu – Thoothukudi, Tirunelveli and Kanyakumari districts. However, voice calls have not been barred. Data services will be barred from Tuesday evening (May 23) until May 27.

The News Minute has confirmed from sources in at least two telecom companies that they have received a directive from the Director General of Police of Tamil Nadu to temporarily suspend internet services.

The directive issued by the Chief Secretary states that it has been brought to the notice the government that some people died in police action during the protest against Sterlite factory at Thoothukudi on May 22, which saw 20,000 people assemble and involve in violence and that this mass gathering of people was achieved mainly through the information passed via social media.

It further states that provocative messages spread in social media with ‘half truth’ and anti-social elements are trying to exploit the situation, leading to a public emergency situation, which necessitates immediate action and for public tranquillity. “…and it felt necessary that services of internet should be stopped/curtailed to prevent spreading of such information, rumours with half truth,” it states.

This directive has been passed under the sub-rule (1) of the Rule 2 of the Temporary Suspension of Telecom Services (Public Emergency or Public Safety) Rules, 2017.

The directive orders telecom players to temporarily suspend ‘any data related message or class of message to or from any person or class of persons or relating to any particular subject brought for transmission by or transmitted or received by any telegraph within the ambit of the Indian telegraph act 1885 and newly formed rule Temporary Suspension of Telecom Services (Public Emergency or Public Safety) Rules, 2017, shall temporarily not be transmitted in the interest of maintaining public order and preventing incitement to the commission or any offense passing through the internet’.

Since Wednesday morning, the police had asked the public to remain indoors to avoid any untoward incident.

The situation in Thoothukudi remains tense, with prohibitory orders under Section 144 clamped down in the town.

In a related development, the Madras High Court on Wednesday stayed the construction work at Vedanta Ltd’s second copper smelter plant at Thoothukudi.

The company had planned to double its smelting capacity to 800,000 tonnes per annum at the Sterlite copper smelter plant.

The court ordered the company to stop construction and other related activities concerning the second copper smelter plant till a decision was taken by the Environment Ministry.

The court also directed the Centre to hold a public hearing within four months before granting environment clearance to the plant.