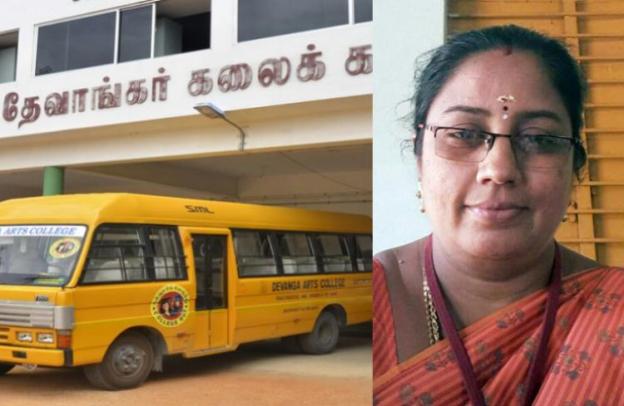 An audio clip in which a voice that purportedly belongs to a professor can be heard attempting to lure female students into sex work.

Hours after an audio clip went viral and all news networks picked it up, the Tamil Nadu police arrested Nirmala Devi, a faculty member of the Devanga Arts college in Virudhunagar on Monday. A case was filed against her under Indian Penal Code Section 370 (trafficking of persons) and Section 67 of the Information Technology Act.

In the audio clip of a telephonic conversation, which lasts for close to 19 minutes, Nirmala Devi, an assistant professor associated with the Mathematics Department is heard telling students, whose identities have not been made public, that an ‘opportunity’ has come their way. And that they are expected to do certain things ‘secretly’ for a very senior official of the Madurai Kamaraj University (MKU) to which the college is affiliated.

She was initially suspended after four female students, who were on the receiving end of the ‘offer’ complained to higher authorities. The college had initiated an inquiry into the allegations.

At one point in the conversation, the professor even claims to have access to the ‘Governor’.

“I sent you videos of governor coming, do you remember? Certain incidents happen. Governor is not a grandfather. You know how close I was to the Governor. I can now be more liberal but people outside won’t know. If I tell you who it is, you will give me answer faster. They will maintain secrecy and privacy to that level,” she is heard saying.

Following this, the CPI (M) Working Committee has asked the Madras High Court to take up the issue suo moto and investigate who all are involved in this racket.

“If this investigation has to take place properly, the Central Government has to rescind the appointment of TN Governor Banwarilal Purohit,” the statement said.

Directly taking on the Governor, CPI (M) said, “Few weeks ago, there were media reports that a South Indian governor was involved in sexual misconduct. At the same time, we saw that the Tamil Nadu governor was involved in duties that went beyond his role. When we put all this together, it is natural for us to suspect and worry about whether irregularities are occurring. The Tamil Nadu government should immediately file a criminal complaint on Nirmala Devi’s recording, appointment and her talks and order an investigation.”

The Madurai Kamaraj University that had initially dismissed the students’ allegation has now ordered an inquiry.

“Firstly, I would like to stress that the University has no part in what is being said in the audio. Everyone knows that Madurai Kamarajar University is pioneering the welfare and safety of students. I feel this incident is part of a conspiracy. We have formed a five-member team to investigate who are the powers behind this incident, and whether it is a true incident at all,” PP Chelladurai, the Vice Chancellor of the University said.

He further said, “We will not anyone put a blot on the University’s reputation. We cannot accept (what Nirmala Devi said, about the favours being for top University officials.) We cannot accept that a woman professor said these things. What was the intention behind these words? What is this woman’s agenda? These truths must be brought out.”

Meanwhile, the Governor has reacted to the controversy. In a statement, TN Governor Banwarilal Purohit said, “It is important to enquire into such matters immediately and without prejudice so that the guilty do not escape without punishment. A high powered enquiry has been ordered into the matter. The enquiry will be headed by R Santhanam, a retired IAS officer.

In the conversation in the audio that was leaked, the voice that allegedly belongs to Nirmala Devi can be heard saying, “On the academic side, I can take the four of you to a big level, I can assure you that. He is that big an official. I will make sure that your marks are not affected. You will get financial support and academic support also. I don’t know if you will tell your parents or not. We will open an account for you and will put money for you.”

When the students ask her to elaborate on what needs to be done, she says, “In order to finish some things successfully they are expecting college students. Till now, I have not gone down to that level. I can only say so much. I believe you will understand what they expect. If you accept this scheme, MKU will be your backbone.”

She further threatens them by saying that if the news were to come out, the girls will be subjected to negative comments. But she claims that agreeing to this ‘opportunity’ will take them to a ‘big level’.

When the students repeatedly reject this offer, it falls on the deaf ears of the professor.

One of them says, “We are not interested and not willing to talk about it further.” When the professor offers them part-time jobs as well, a student says, “We don’t want to study further. We want to join government posts.”

On hearing this, the professor then claims, ” You are small children. Even to get a Vice Chancellor post you will need political influence. For TNPC paper evaluation also you need. You all just think again. I will speak to you next week. They have an important assignment next week and so there was a requirement. That is why I am asking now. Otherwise, I wasn’t planning to bring this up till you are in the third year. You won’t get another opportunity like this. You think about it again.”