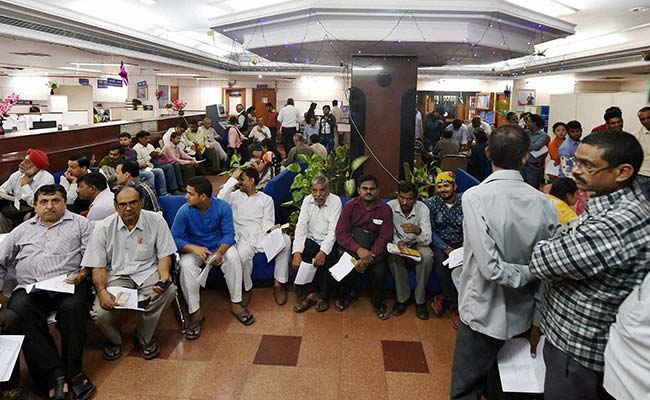 NEW DELHI:
HIGHLIGHTS
Government moves to check long lines at banks for new notes
Indelible ink will mark those who’ve withdrawn their quota
Scrutiny of whether black money being deposited Jan Dhan accounts
As India deals with a massive cash crunch, indelible ink will be used at banks to mark those who have withdrawn new notes to ensure that people are not drawing more than their fair share, said Finance Ministry officials today.

The same tactic is used to prevent multiple voting in elections. An ink stamp will be used after a person has exchanged Rs. 4,500 worth of old notes for new ones, the weekly limit set for now.

“Some unscrupulous people are trying to convert their black money into white and have arranged for groups and are sending them from one branch to another to exchange notes. So you see, the same people are coming again and again,” said Economic Affairs Secretary Shaktikant Das.

A week ago, Prime Minister Narendra Modi announced that Rs. 500 and Rs. 1,000 notes were being withdrawn from circulation to combat black money and corruption. They have been replaced with new high-denomination notes for Rs. 500 and Rs. 2,000.

Since then, the lines at bank branches and ATMs have been relentlessly long to access the new currency. PM Modi has urged the country to give him “just 50 days” to clean up the system and “bear with inconveniences” because the move will ultimately benefit the poor.
Over 45 billion dollars of old notes were deposited in banks in the first five days after the ban was announced.

Finance Ministry officials today said that poor people who have “Jan Dhan” bank accounts are being harassed or misused by those with black money to deposit the old notes, which would effectively convert them into white or legit cash. These accounts, which have a limit of Rs. 50,000, provide users especially in rural areas with a debit card, overdraft facility and accident insurance cover for up to a lakh.

There have been a series of media reports on how the deposits in these accounts have shot up since the notes ban was announced, with some suggesting that those with black money were using them to turn in old notes that they cannot account for against their declared sources of income. “Legitimate deposits will not be put to any inconvenience,” said the Economic Affairs Secretary.

To ease the pressure and reduce inconveniences, the government yesterday increased the weekly cash withdrawal limit to Rs. 24,000 and said up to Rs. 4,500 worth of old notes can be swapped for new ones. At ATMs, people can withdraw up to Rs. 2,500 per card per day, though many cash withdrawal machines are still being reconfigured to dispense the new-size currency. Utilities bill and petrol pumps will accept the old notes till midnight of November 24.

Opposition parties have lashed out at PM Modi’s currency recall with several political parties teaming up to corner the government in the parliament’s winter session, which begins tomorrow.

“Modi is saying give me 50 days to deal with the crises. But who created the crises?” said Randeep Surjewala, Congress spokesman.
Opposition leaders have accused the government of throwing millions of common people in financial distress as the government failed to put adequate measures in place.

Yesterday, the government said it will allow a network of so-called banking correspondents, who travel to rural areas to provide people with access to banking services, to carry more cash.