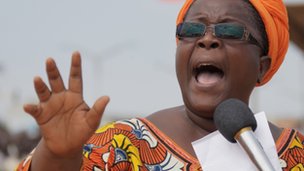 Women in Togo have been urged to abstain from sex for a week from Monday to push their demand for reform.

The ban has been called by opposition coalition Let’s Save Togo, made up of nine civil society groups and seven opposition parties and movements.

Opposition leader Isabelle Ameganvi said that sex could be a “weapon of the battle” to achieve political change.

The coalition wants President Faure Gnassingbe, whose family has held power for decades, to stand down.

“We have many means to oblige men to understand what women want in Togo,” Ms Ameganvi, leader of the women’s wing of the coalition, told the BBC.

She said she had been inspired by a similar strike by Liberian women in 2003, who used a sex strike to campaign for peace.

“If men refuse to hear our cries we will hold another demonstration that will be more powerful than a sex strike,” she added.

Togo has been run by the same family for more than four decades.

President Faure Gnassingbe took power in 2005 following the death of his father, Gnassingbe Eyadema, who ruled Togo for 38 years. The president was re-elected in 2010.

The strike was announced at a rally on Saturday in Lome, attended by thousands of people.

The rally was held to protest against recent electoral reforms, which demonstrators say will make it easier for Mr Gnassingbe’s party to win re-election in the parliamentary polls set for October.

Activists say that the strike will motivate men who are not involved in the political movement to pursue its goals, which include an end to the system allowing unlimited presidential terms.

Earlier this month, two anti-Gnassingbe protests were dispersed by police using tear gas and more than 100 people were arrested.

The sex strike was welcomed as a political tool by some women in Lome.

“It’s a good thing for us women to observe this sex strike as long as our children are in jail now. I believe that by observing this, we will get them released,” Abla Tamekloe told the Associated Press.

Cop arrested after 17 year-old complains of sexual harassment #Vaw
Case against Anbumani Ramadoss for inciting caste enmity
CPI(ML) Activist Zafar Lynched to Death in Rajasthan For Resisting Photography and Videography of Wo...
False sense of security: #Aadhaar is broken, and the new bill doesn't fix it