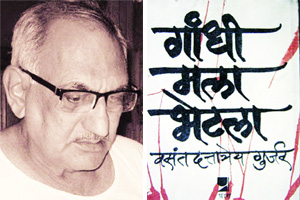 The Marathi poem, Gandhi Mala Bhetala (Gandhi met me), is a satirical critique of those who falsely claim to follow the path of Mahatma Gandhi

The poem was first published in 1983. The poet was a class-III employee of the Bombay Dockyard, Vasant Dattatraya Gujar, now in his 70s. More than two decades later, Tuljapulkar’s case has wound its way to the Supreme Court  a unique question the apex court has posed: Under Indian laws, does one have the ‘poetic licence’ to use the name of historical personalities such as Mahatma Gandhi as a symbol in his/her poem, which a reader might find obscene?

The poem has been published several times, before and after Tuljapulkar printed it. It has been appreciated by several Marathi, as well as Hindi poets and authors. It is to be included in an anthology to be published by the Sahitya Academy, put together by the 2014 Gyanpeeth award winner, Bhalchandra Nemade, as one of the best literary works on Gandhi.However, when Tuljapulkar republished the poem in 1994, Patit Pawan Sangathana, a Pune-based right-wing Hindu organisation affiliated to the Rashtriya Swayamsevak Sangh, filed an FIR against the four, claiming it was obscene and lowered the image of the Father of the Nation.

Tuljapulkar was a leader of the Communist Party of India-controlled All India Bank Employees Association.

In Latur district, the police filed a case against the four, under sections 153A, 153B and 292(3) of the Indian Penal Code. Section 153A is imposed against those promoting enmity between different groups on grounds of religion, race, place of birth, residence, language. Section 153B is imposed for imputations and assertions prejudicial to national-integration. Section 292(3) is imposed when something is found obscene or lascivious, appeals to the prurient interest or tends to deprave and corrupt someone.

The SC says  historically respectable figures command a different threshold of obscenity. Then, without explaining what that threshold is, it says that the question is whether “in the name of artistic freedom… a poet… may be obscene.” Yet there is absolutely no quarrel with that proposition! Everyone accepts that obscenity is a constitutional restriction upon the freedom of speech in India. The question is what constitutes obscenity.

Confusion is worse confounded in its concluding paragraph, where the Court says:

“When the name of Mahatma Gandhi is alluded or used as a symbol, speaking or using obscene words, the concept of “degree” comes in. To elaborate, the “contemporary community standards test” becomes applicable with more vigour, in a greater degree and in an accentuated manner. What can otherwise pass of the contemporary community standards test for use of the same language, it would not be so, if the name of Mahatma Gandhi is used as a symbol or allusion or surrealistic voice to put words or to show him doing such acts which are obscene.”

While talking about the Indian people, he said:

Truth is not separate from Beauty. Truth is Beauty.

I see Beauty by way of Truth.

By holding onto Truth, one can see the Beauty

And value of compromise.

Truth, it is harder than stone, but much more tender than a flower.

Gandhi met me on Akashwani Mumbai’s 537.6 kilocycles (frequency) in his Gandhivandana programme.

He said: Even the Mahatma’s word should be examined on the scale of intellect and if he fails, his word must be abandoned.

“The Gandhivandana was interrupted between 6 hours 55 minutes and 6 hours 02 minutes due to technical difficulties. We regret the inconvenience.”

When Gandhi met me at a temple, he was counting money in keeping with the Baniya way

(Making sure nobody is watching, he stuck a blue note into his waist.)

When Gandhi met me at a Buddhist monastery, he was eating beef chilli.

When Gandhi met me at a church, he knelt in front of the Christ, who forgives every week.

When Gandhi, the nanga fakir met me at a Mosque, he was in the process of converting

When Gandhi met me in Dr Babasaheb Ambedkar’s enlightened India, he said:

“The welfare of Harijans is my survival instinct. I don’t want rebirth but if I am reborn, I wish to be untouchable to experience sorrow, suffering, and insults.

Saying this, he bathed in the temple of goddess India and stepped into the Ganga.

Gandhi met me at Sane Guruji’s AntarBharati schools where he was narrating Shyam’s sweet stories to the helpless kids, who exploited their mothers and hailed their abusive fathers.

Shyam’s mother (Shyam Chi Aai) told him to use a Nirodh without fail.

This was the country’s first street play.

Another experiment at nonviolence.

Gandhi met me in Tagore’s Geetanjali

When he was writing a poem on Golpitha

During an event for the disabled

Arms are not to be outstretched to beg. The donation makes one vulnerable and saying so he accepted a cheque in American dollars.

Saying “satisfaction through sex”, and then, he turned to a goat

At a drive-in theatre in Karl Marx’s Toyota

As he passed his time watching a movie titled Workers of the world, unite!

He was leaving the farms for city life.

India is calling for RED on Red fort.

Gandhi met me in the Kremlin accepting a Nobel Peace Prize from Brezhnev.

Gandhi was consoling Reagan by showing him the fixed and movable assets that the world of dead humans possessed.

What treatment will you offer?

What experiment will you perform?

What light will you shed?

Amid slogans of Akhand Hindusthan, he did 61-62 sit-ups saving the half-pant and trumpeting:

I am Hindu and I am proud of it.

I will teach students at convent schools and help them migrate to England and America.

In petrodollar’s three-in-one, he was listening to Pakistan versus India cricket commentary

When he heard this, Gandhi offered Namaz and went all over the Mohallas garlanding green bulletin boards

Even after so many years of Independence, we have to make a pledge

India is my country and all Indians are my brothers and sisters.

I love my country and I am proud of its rich and varied heritage.

I shall always strive to be worthy of it.

I shall give respect to my parents, teachers and all elders and treat everyone with courtesy.

To my country and my people, I pledge my devotion

At the Viceroy’s House for Irwin

He was counting the pension of freedom fighters

At a family welfare centre of self-proclaimed Netaji Raj Narain

Bare-chested, he was lolling on the bed, getting a massage and eating almonds, pistachio, and sweets

At the All India Hijra Conference

He was delivering a lecture on family planning

On the common man’s earth

With abandoned kids, he was playing the game of husband and wife

What is the definition of a secular country?

Forget chastity, fuck all of them

He relinquished his pancha and lost his dignity

I was never taken in by his pancha

Whether a pancha, a dhoti, or a trouser

Experiments with truth can be performed any which way

Even through a poem

Sewing a shoe at the Bata Factory

High on self-urine, he said:

Women are fools and devoid of reason

You know who I am referring to

Signaling to the destiny, he said

You are trustworthy, pass on the throne to Indira later

Addressing the nation, he said:

My life’s aspiration has been fulfilled

He said: My dream to bring means of entertainment to the downtrodden and the masses has come true (The cameraman had his focus on Gandhi’s pancha and kathi (cane))

From the matka, he was drawing three cards of National Unity

Holding a tinpot, standing in a line along the highway

To bestow the ‘guard of honour’ on Khrushchev

Her sycophants kicked him out

Leader of the nation – Indira Gandhi

Leader of the youth – Sanjay Gandhi

To hell with Mahatma Gandhi

In the accused stand

Convicted of treason, he was sentenced to be hanged till death

He was penning an editorial piece on Gandhi

We saw God in Gandhi

Now, God will not return on the Earth for eons

Saying so he embraced the nation

God has died and a good person has died, too

Now in this world of Satan, there’s no escape for a dead God

And no escape for a good person

Then in a flash, he went into his Samadhi

P.S-  I would like to thank  Dipti Sarnaik for the first draft  , Ramu Ramanathan  and especially Rushikesh Aravkar for the final translation

Vasai hamlet near Mumbai gets electricity first time in 70 years
#Invitation- Mumbai Railway -Accidents, corruption and chaos @8dec #mustshare
The Political Assassination of Ishrat Jahan
2016- As the Sun Sets On The Nuclear Wasteland