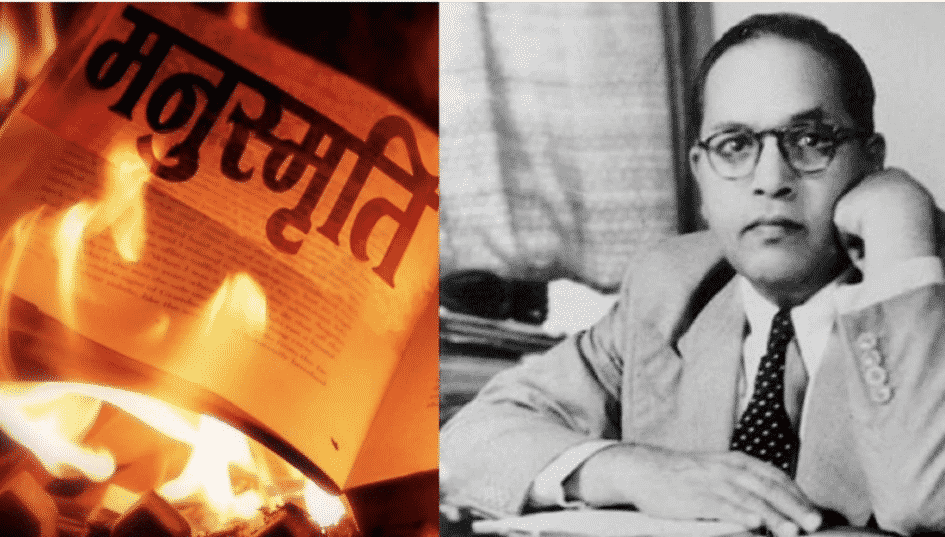 Even today the attempt is to whitewash Manusmriti, not shun it. But all is not lost as the ripples of Black Lives Matter have reached Indian shores.Subhash Gatade 26 Jun 2020

It was 1927, the second phase of the historic Mahad Satyagrah was on, and Dr. Bhimrao Ambedkar led thousands of people in burning the Manusmriti, an act he compared with the French Revolution of 1789. Time and again, in speeches and writings, he categorically opposed the world-view of Manu, the legendary figure to whom are attributed the tenets of the Manusmriti, said to be dated to around 100 CE.

In the book written by scholar and activist Anand Teltumbde, Mahad: The Making of the First Dalit Revolt, published by Navayana in 2017, is recorded the resolution which was proposed by the social activist Gangadhar Sahasrabuddhe, and then read out at the Mahad Satyagrah. It states that the firm opinion of this conference is that the Manusmriti, “taking into consideration its verses which undermined the Shudra caste, thwarted their progress, and made their social, political and economic slavery permanent…is not worthy of becoming a religious or a sacred book. And in order to give expression to this opinion, this conference is performing the cremation rites of such a religious book which has been divisive of people and destroyer of humanity.”

Twenty three years later, Dr Ambedkar marked the promulgation of the Constitution of India as the “end of the rule by Manu”. And yet, 70 years thereafter, a significant section of Indians are still fascinated by Manu and have no qualms in venerating him. Even the Black Lives Matter protests in the United States and large parts of Europe, in which statues of slave-owners and colonialists are being knocked down or disfigured, the Indian followers of Manu have no regrets about deifying him.

But all is not lost. The ripples of Black Lives Matter have reached Indian shores, and an existing conversation about the statue of Manu that stands at the premises of the Jaipur High Court is slowly getting resuscitated.

This statue was installed in 1989, when the BJP was in power in the state, at the initiative of Padam Kumar Jain, who was the president of the Rajasthan Higher Judicial Officers’ Association. Dalit activists and civil liberty activists immediately challenged the installation. The proposal was so strongly contested that even 31 years on this statue is yet to be officially inaugurated. In fact the High Court had decided, months after the statue was given permission in 1989, that it should be removed, but Hindutva leader Acharya Dharmendra appealed and was granted a stay. The High Court decided that future hearings in the matter would be held before a bench of more than two judges, one of them being the Chief Justice. In the 31 years since, there has only been one hearing which was in 2015.

Judges came and went, but none took up the matter. Whether this reflects of their own sociological blindness towards caste discrimination or their world-view and that of those who had installed the statue resonated, remains an open question.

In 2015, when the High Court finally considered the petition again, there was tremendous resistance by upper caste, mainly Brahmin lawyers. They thronged the court and did not allow the petitioner’s counsel to argue his case. There ended the matter and since then there have been campaigns, mobilisations and demands for the removal of this statue, but to no effect. Activists, writers, social workers and ordinary people who sincerely believe in the promise of the Constitution have felt infuriated that Manu is being deified at a law court.

Throughout the nineties and the decade after, Dalit leaders such as Kanshi Ram and Ramdas Athawale would visit Jaipur and protest against the statue. The famous socialist leader, Dr Baba Adhav, led a rally of thousands from Maharashtra to Jaipur demanding its removal. Two women activists, Sheela Bai Pawar and Kanta Ramesh Ahire of the Ambedkarite movement smeared the statue with black paint in October 2018.

Thus while the world debates how society must deal with the controversial symbols of yore, historical or mythological, there is no similar upheaval in India. But at least a conversation is getting renewed, even if the conservatives have the upper hand at the moment.

The most troubling aspect in India is that many articulate sections of our society, most of whom are so-called upper castes, instead of trying to understand why Manu’s world-view was the bane for the oppressed people, insist that there is no need to question this “original law-giver” and are attempting to create a sanitised version of him.

Contrast this with the soul-searching that the Supreme Court judges engaged in in the United States, when they wrote the following letter during the Black Lives Matter movement:

“Devaluation and degradation of black lives is not a recent event. It is a persistent and systemic injustice that predates this nation’s founding. But recent events have brought to the forefront of our collective conscience a painful fact that is, for too many of our citizens, common knowledge: the injustices faced by black Americans are not relics of the past…It is the collective product of each of our individual actions—every action, every day. It is only by carefully reflecting on our actions, taking individual responsibility for them, and constantly striving for better than we can address the shameful legacy we inherit. We call on every member of our legal community to reflect on the moment and ask ourselves how we may work together to eradicate racism”.

The world-view propounded in the Manusmriti has debilitated Indian society, playing havoc with the socially and culturally oppressed. Seventy years after Independence, a crime is committed against a Dalit by a non-Dalit every sixteen minutes, which includes four rapes every day and thirteen Dalits murdered every week. Seizing Dalit-owned lands and social boycotts are not uncommon and even institutions of higher learning are not free of discrimination.

Yet instead of tackling the issue, the attempt in India is to repackage Manusmriti at various levels. Right-wing intellectuals are preparing the ground for two things: first, to absolve the Manusmriti for its implication in the violence against Dalits and women. Second, to divert attention from caste hierarchy and blame the Muslims for all events of the past. It is to this end that these “intellectuals” also seek to manufacture a “suitable Ambedkar”, an Ambedkar who will help them in their project.

Towards the end of 2017, just two weeks before the 90th anniversary of the Mahad Satyagraha, the leading RSS ideologue Indresh Kumar participated in a programme in Jaipur organised by one Chanakya Gana Samiti. The theme for the discussion was “Adi Purush Manu ko Pehchanein, Manusmriti ko Janein”—Know Adipurush Manu, Understand Manusmriti. The invitation to the event described the Manusmriti as “opposed to caste discrimination and the caste system”. Kumar told the audience that Manu was not only against the caste system, but also opposed inequality. He suggested that historians had presented a confusing picture of Manu, who, he said, was the first jurist in the field of social harmony and justice.

The attempt to sanitise the Manusmriti has been a long project of the Sangh intellectuals, which mostly means revising the “ancient Hindu scriptures”. In 2017, Amir Chand, a leader of Sanskar Bharati, an RSS affiliate, urged Minister of Culture Mahesh Sharma and a BJP and RSS member, to promote activities so that a “correct image of the ancient Hindu scriptures” can be presented to the public. Chand was worried that the scriptures appeared to be anti-Dalit and anti-woman. These portions had to be whitewashed. New “research” was needed for this re-branding of the Manusmriti.

An alternate narrative vis-a-vis Manu would be impossible to foster unless Indian society undergoes a churning and realisation that it badly needs social reform. In his famous monograph, “The Untouchables and Pax Britannica, 1931”, Ambedkar quotes Sir T Madhava Rao who, speaking of Hindu society of his time, had said, “The longer one lives, observes, and thinks, the more deeply does he feel that there is no community on the face of the earth which suffers less from political evils and more from self-inflicted or self-accepted or self-created, and therefore avoidable evils, than the Hindu community.” He also said that the first social reformer, and the greatest of them all is Gautama Buddha, with home any history of social reform must begin. Therefore, the sources for an alternative narrative exist, and is attractive to justice-loving people, but there is no sign that people are ready to traverse the treacherous path to make Manu history.

The author is an independent journalist. The views are personal

#India - Nobody crashed the Aston Martin #Ambanicase
Press Release - KKNPP Must Tell the Whole Truth and the Director Must Go
Modi’s Gujarat not quite Swachh
Man killed after exposing khaps on TV, wife fears she will be killed #SatyamevJayate #AamirKhan #Ho...