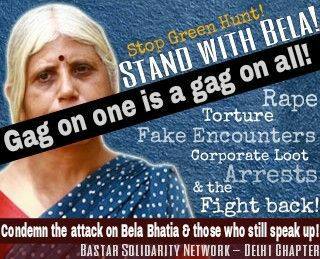 Activist Bela Bhatia has been championing tribal rights for the past decade.(HT File Photo)

A day after the alleged attack on her, social activist Bela Bhatia told mediapersons in Jagdalpur that some “goons” and “ill-elements” are pressuring her to leave Bastar and they have forcefully obtained her consent to vacate her rented house.“I will not leave Bastar even after these threats. I am just now under house arrest, as the police have cordoned off my house in the name of security and are keeping a close watch on me,” Bela alleged.Bela further added that she is vacating the house because her landlord was pressurised by the goons.She said she will continue to fight for the rights of tribals and marginalised in Bastar. “As of now, I am just leaving my current address but not Bastar,” she added.On Monday morning, a group people came on two-wheelers and an SUV and threatened to set her house ablaze if she did not vacate it. The activist later called the collector for help, who sent police to control the crowd.

The activist, who has been working for tribal rights for over a decade, had faced similar intimidation in 2015 when she had raised the issue of rape of tribal women by security personnel.

Activist Swami Aginvesh also condemned the attack on Bhatia and demanded the removal of inspector general SRP Kalluri from Bastar and take legal action against him on charges of violating human rights and the Supreme Court directives.

“The aim is to provide security to her not to create any obstacle in regular functioning of Bhatia,” he added.

Meanwhile the president of Bastar Adivasi Suraksha Manch, Mahesh Kashyap, told a press conference in Jagdalpur that Bhatia is a “naxal supporter” and “anti-national”. Her presence is disrupting the peace in Bastar.

“An FIR against will be lodged against her soon,” Kashyap added.

SC grants interim bail to Tarun Tejpal
How to Create a Dictatorship
India - How Bezwada Wilson Liberated Lakhs Of Manual Scavengers
'What I saw sent a shiver up my spine': Oz farmer on Adani's project in Gujarat