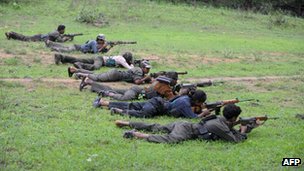 Chhattisgarh is a hotbed of India’s Maoist insurrection

Tribal or indigenous people in the central Indian state of Chhattisgarh are to be banned from carrying traditional weapons such as sickles, axes and bows and arrows, police say.

They say that the move is necessary because of increasing attacks on police and civilians by Maoist insurgents with tribal weapons in public places.

The move has drawn criticism from tribal bodies and political parties.

They argue that it curtails the rights of tribal people.

Maoists are active in more than a third of India’s 600-odd districts. They say they are fighting for the rights of poor peasants and labourers.

Chhattisgarh is one of the Indian states worst affected by Maoist violence.

Rebels in its Narayanpur district have established a “liberated zone” over an area of 4,000 sq km (2,485 sq miles).

Boards, written in Hindi and local dialects, have been erected by police throughout the state warning of “legal action” if anyone is found to be carrying traditional weapons in public places, especially in markets.

A police spokesman in Narayanpur told the BBC that Maoists were targeting villagers and police in market places.

“They are taking advantage of the tribal tradition and it becomes difficult to differentiate between a Maoist and a tribal in such places. This is the reason we have decided to restrict carrying traditional weapons in public places,” Superintendent Mayank Srivastava said.

Such has been the criticism against the initiative, however, that police say they may soon alter the ban so that it applies only to the carrying of bows and arrows by tribal people.

Ramesh Thakur, a spokesman for the tribal group Sarva Adivasi Sabha, said that the move violated the rights of tribal people to carry weapons as guaranteed by the Indian constitution.

“The authorities have failed to counter the Maoists in this belt and so they are venting out their ire on the local populace,” he said