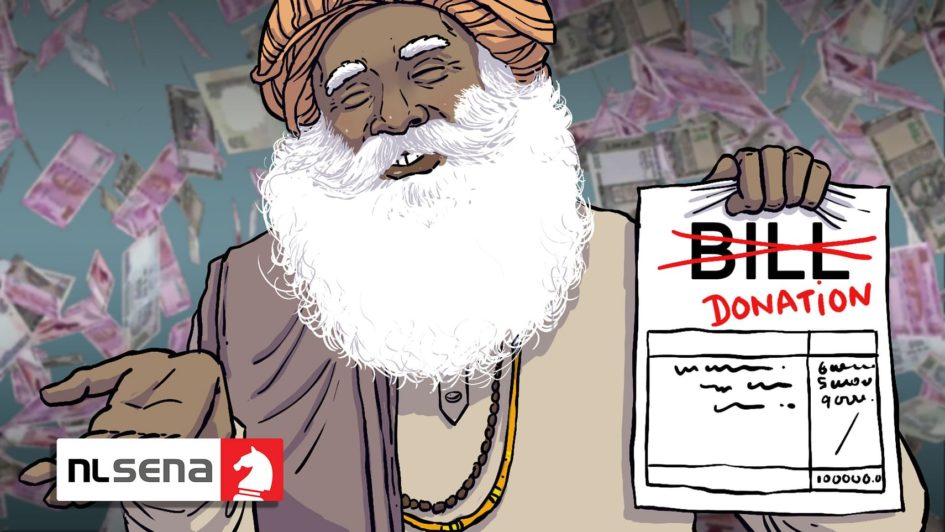 The magic mantra is ‘donation’.

Jaggi Vasudev’s Isha Foundation Inc, which is registered in the United States, showed a net income of Rs 56.43 crore in 2018, as per Internal Revenue Service records. Of this, it says, about Rs 35.81 crore came from donations. There are no public records of the foundation’s revenues in India but it claims that donations – or “contributions”, as it prefers to describe such transactions – account for a considerable chunk. Only there’s evidence that at least some of the donations aren’t so. In fact, Isha even lists as “donations” earnings from selling services such as yoga sessions and “spiritual” jaunts as well as a range of products.

But why does Isha insist that its revenues come mainly from donations? It’s a public charitable trust and, thus, exempted from paying taxes under the Income Tax Act. So it cuts donation receipts even for textbook trade transactions. Like when it sells saplings.

“I bought saplings from Isha’s Madurai centre thrice in late 2017, once for Rs 8,000 and twice for Rs 3,000. They never gave me a bill and I didn’t ask because I didn’t need one. Then 4-5 months later I received an email saying I’d made a donation of Rs 1,242 to Isha. They also sent me a donation receipt,” said Nagappan Gowtham, 37, an organic farmer in Dindigul. “But it wasn’t a donation, it was a simple trade. What is more, I bought their product for Rs 14,000 and they sent a donation receipt for a random sum of Rs 1,242. The receipt said I had donated to Isha Outreach which was exempted under Section 80G of the Income Tax Act. This is cheating. They want to save tax on all the money they make by showing it as coming from donations.”

In 2014, a Swedish citizen of Indian origin filed a complaint of cheating against Isha at Alandurai police station, Coimbatore. Jeya Balu said she had paid the foundation Rs 4,50,000 for yoga sessions and a yantra ceremony, but instead of a bill she was handed a receipt for donation. “I thought the money was fees for yoga and the yantra ceremony. Because a donation should come from the heart, not from somebody fixing it,” she wrote.

Balu demanded a refund but Isha flatly refused. It was only after a local lawyer named JD Socrates and his friend R Sadiqullah, who ran a garment store in Coimbatore, came to her help that she managed to get her money back in 2015.

“Jeya Balu came to the Isha Foundation in December 2014. She was a part of a group of westerners who had come for a yantra ceremony. They had to attend a meditation programme and get a stone blessed by Sadguru that would supposedly bring them peace and prosperity. She paid Rs 4.5 lakh for the ceremony and the stone. At the end of the ceremony, the staff told the visitors the stones would be couriered to their homes for which they must pay Rs 1.5 lakh more,” Socrates recalled. “That’s when Jeya caught on to them and fled the centre with just her handbag.”

From all these companies, according to the union ministry of corporate affairs records, Isha earned nearly Rs 117 crore in 2019-2020.

The foundation also makes considerable sums selling “spiritual” jaunts. A 13-day trip to Kailash Mansarovar with Vasudev costs up to Rs 50 lakh per person. For devotees who cannot pay such luxurious amounts, there are more affordable packages – Rs 2,75,000 per soul to reach the holy mountain via Kyirong, Rs 3,45,000 via Lhasa, Rs 5,50,000 via Lhasa and Ali. But, under these cheaper packages, they only get a solitary meeting with Vasudev – called darshan – during the trip. The devotees go in multiple groups of 60 under the Rs 2.75 lakh and Rs 3.45 lakh packages and 30 under the Rs 5.50 lakh package.

Similarly, a 12-day trip on motorcycle to the Himalayas with Vasudev is priced at up to Rs 12 lakh per person; a five-day Varanasi tour costs up to Rs five lakh in Vasudev’s company and Rs 50,000 without; a dash to the Chamundi Hills in Mysore is for Rs 3-4 lakh; and a five-day trip to Rameshwaram or Madurai sets a devotee back by up to Rs 45,000 per person. From selling all these ‘spiritual’ tours, a back of the envelope calculation shows Isha makes around Rs 60 crore a year.

”I bought the Rs 1,50,000 programme and there were around 300 of us on the same package,” said a Vasudev follower who attended the 2021 Mahashivratri festival. “That’s Rs 4.5 crore in four days from just this one package.”

In 2018, Achimuthu Shankar, the former Tamil Nadu vigilance official and whistleblower, complained to the state’s income tax commissioner that Isha was misusing the 80G exemption, which solely covers ‘voluntary donation’, to evade tax. The foundation was selling various products and “spiritual programmes” and listing the earnings as donations on its books, he pointed out. How could money paid for a product or a “spiritual service” be a donation, he asked? Donation, by definition, must be voluntary.

“Isha’s yoga programmes, which they advertise widely, aren’t free. I signed up for a weeklong course in 2014 and I was told categorically that I couldn’t join until I paid Rs 750. I paid and was given a receipt stating that my fee for the yoga course was a ‘donation’ exempted under 80G,” Shankar told Newslaundry. “On the last day of the programme, they bring a whole lot of their products to sell, like Jaggi’s photos, books, CDs, and religious symbols, pictures, statues. Buy a product and they give you a donation receipt. By doing so they not only evade Goods and Services Tax but also income tax.”

It was to bring these “massive irregularities” to the attention of the tax authorities that Shankar had filed “a detailed complaint” in 2018. What happened to it?

“I received a call from the income tax commissioner asking if I was the person who had sent them the complaint,” he replied. “Yes, I said, and offered to submit receipts and other evidence that was in my possession. But after that one phone call nearly three years ago I never heard from them.”

Asked if Shankar’s complaint had been examined and resolved, K Ravi Ramchandran, income tax commissioner for exemptions, said, “The complainant should contact us back. I will look into this matter. If there are irregularities we will take appropriate measures. But I need to go through the complaint first.”

Kalairasu R, a lawyer in Coimbatore, explained that Shankar’s complaint against Isha was sound in law. “The 80G exemption applies to non-religious organisations. But Isha engages in all sorts of religious activities. Presently, they are running a ‘Free Temples’ campaign in Tamil Nadu which is a religious activity, and thus a clear violation of 80G.”

Isha didn’t respond to queries about its finances and allegations of tax evasion.

Isha’s tactic of showing business transactions as “donations” hasn’t spared even its much hyped environmental campaign, Cauvery Calling, launched in September 2019 to plant 242 crore trees in the river basin, from its origin in Talacauvery, Karnataka, to Thiruvarur, Tamil Nadu, a stretch of 639 km. Vasudev roped in leading politicians, filmstars, and sportspersons to promote the project and his foundation sought “donations” of Rs 42 per tree.

In his petition, filed in November 2019, Aamarnath asked how a private organisation was allowed to collect vast sums of money from the public to undertake a project on government land.

“At the launch ceremony, Karnataka chief minister BS Yediyurappa announced that his government would provide two crore saplings for the project to Isha. And Vasudev said his project was approved by the government, though Niti Aayog regulations stipulate that river rejuvenation projects can be undertaken only by state or central governments. Private organisations or NGOs can only assist them. No private organisation can collect money in the name of river rejuvenation without the approval of the state government. And here Isha was collecting enormous sums of money for a project that was not even registered,” Amarnath told Newslaundry. “That’s why I moved the court.”

Accepting Amarnath’s contention, the high court observed in January 2020 that Cauvery Calling wasn’t a registered society and Isha didn’t have governmental permission to solicit money for the project. It pulled up the Karnataka government for not acting while Isha was collecting the money and directed the foundation to disclose how much they had collected thus far.

Responding to the court in March that year, the Isha Foundation claimed that it wasn’t involved in Cauvery Calling. The project, it said, was run by Isha Outreach, which had collected “donations” amounting to Rs 82.50 crore until the previous month and used it entirely to plant trees. Currently, Isha’s website shows that 5.6 crore trees have been contributed to the project so far. At Rs 42 a tree that comes to over Rs 235 crore.

In its defence, the Karnataka government revealed that it had not approved the Cauvery Calling project. It had merely given Isha two crore saplings under Krishi Aranya Prothsaha Yojane, a scheme offering saplings to farmers at subsidised rates and a yearly incentive per plant if it grows. In turn, Isha was supposed to encourage farmers to enroll for the scheme, not plant trees on its own. In the end, the government added, it only gave 73.44 lakh saplings to Isha because the forest department pointed out that raising two crore saplings of many different species wasn’t feasible.

Subsequently, the forest department clarified, through a public notification, that they had provided neither land or funds for Cauvery Calling. In February 2021 Isha Outreach admitted as much.

At a hearing on March 8 this year, the high court suggested that the state investigate whether Isha had collected funds for the Cauvery Calling project by hawking it as a government project. Isha Outreach promptly moved the Supreme Court to halt any such inquiry. There, the matter languishes unheard.

This is the final part in a three-part series.

From People’s Bank to a Corporate Slave – Where is the SBI headed?
Kerala Hunts for Priest Accused of Raping 14-Year-old Girl #Vaw
Guess who's not angry with Greenpeace at all ?
Press Release - CHRI and PRW concerned at the regressive Maharashtra Police [Amendment ] Ordinance 2...