Reuters reports that the Trump regime is implementing a new change to America’s domestic terrorism programs that will officially install religious profiling against Muslims and remove the dangerous white supremacist extremist groups who are responsible for much violence across the United States from the watch lists.

Just in the past two years, authorities blamed radical and violent ideologies as the motives for a white supremacist’s shooting rampage inside a historic African-American church in Charleston, South Carolina and Islamist militants for shootings and bombings in California, Florida and New York.

A reporter at ThinkProgress tweeted that eliminating the tracking of America’s homegrown extremists similar to the Ku Klux Klan, certain far-right “patriot” groups and neo-Nazi groups will also eliminate the crucial tracking that the CVE program does to monitor the ranks of these hate-crime gangs and criminal enterprises.

2. As the article notes, there are many valid criticisms of CVE.

But tracking white supremacists and anti-government types is important.

As part of the Republican Party’s efforts to institute Islamophobia into public policy, terrorism will only be referred to as “radical Islam.” This is a clear strategy by the Trump regime that provides false justification to the Muslim ban that affects one of every eight Muslims worldwide from seven countries whose residents have never committed an act of terror on American soil.

Removing the white supremacist and violent extremist groups from federal tracking programs is an obvious power play by the Bannon regime to encourage racial hate and religious discrimination. The Trump regime has already removed the CVE’s previous 5-point counterterrorism strategy page from the State Department’s website, which we recovered via Archive.org.

Strategically, Trump’s efforts to brand terror as something solely Islamic are impractical and extremely unproductive, as Reuters’ report notes:

Hoda Hawa, director of policy for the Muslim Public Affairs Council, said she was told last week by people within DHS that there was a push to refocus the CVE effort from tackling all violent ideology to only Islamist extremism. “That is concerning for us because they are targeting a faith group and casting it under a net of suspicion,” she said.

Some Republicans in Congress have long assailed the program as politically correct and ineffective, asserting that singling out and using the term “radical Islam” as the trigger for many violent attacks would help focus deterrence efforts. Others counter that branding the problem as “radical Islam” would only serve to alienate more than three million Americans who practice Islam peacefully.

Some proponents of the program fear that rebranding it could make it more difficult for the government to work with Muslims already hesitant to trust the new administration, particularly after Trump issued an executive order last Friday temporarily blocking travel to the United States from seven predominantly Muslim countries.

The fact is, American law enforcement (chart below) has consistently reported that their greatest concern is white supremacists or terrorists like the KKK, neo-nazis and their white supremacy enablers, not extremist groups like al-Qaeda, which has refocused its effort on exploiting the instability in the Middle East and not on Osama bin Laden’s delusions of “global jihad.”

It’s without question that America has reason to be vigilant about ISIS-inspired attacks today, and also to guard steadfastly against another major attack.

Trump’s voters may not have taken him seriously, but now they’ll have to grapple seriously with an energized group of violent, racist groups flourishing openly in America. Trump’s Islamophobic executive orders only play into the hands of extremists like ISIS and help to foster the atmosphere of ostracization and disenfranchisement that serve as breeding grounds for extremist ideologies. 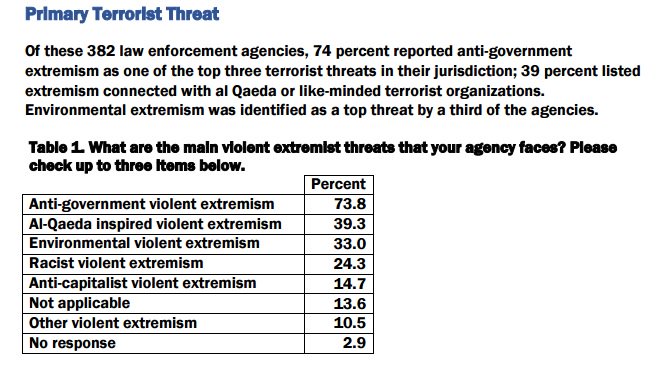