Citizens for Justice and Peace met the Commissioner of Police Mumbai to express our concern over the fallout of Saturday’s violence. His mature  handling of a potentially explosive situation on Saturday did ensure that matters were brought under control. Most of all his immediate presence at the venue within minutes of the situation spiralling out of control, his direct appeal to the protesters and organisers, his reference to the bloodbath of 1992-1993 worked to calm the crowd and draw apologies from many sections of the Muslim community.

We have also shared details of the misuse of certain photographs from the internet claiming that these are about atrocities on Rohingyas in Burma when in fact they belong to different tragedies and protests. CJP would like to express deep sorrow at the loss of lives on Saturday and also deep regret at the injuries –some serious caused to several police men and women last Saturday.  Enclosed is a copy of the memorandum that contains the manipulated photographs.

CJP would like to state that while photographs about the situation in Burma have been doing the rounds since mid-June 2012, it was a Pakistani blogger who has pointed out the misuse/manipulation of some of the images.CJP would also like to urge that restraint and maturity continues to govern not just the law and order machinery but also the political class. Among the wide use of SMS for Saturday’s agitation, politicians have also been sending out provocative text messages. (we have some of these). Unlike what has been put out, we would also like to state that while the media may not have highlighted the situation of the Rohingyas in Myanmar as much as say they have the Hindu refugees of Pakistan, this needs to be highlighted by enlightened debate. As far as the Assam issue is concerned there have been as always mixed reportage in the media. The Open Magazine calls it on e3 sided provocation against the Muslim settlers. It would also be worth remembering that clearcut efforts to communalise the situation in Assam have been spearheaded by our largest opposition party that speaks of the violence against the Bodos but not against the Muslim settlers who’s citizenship issue has been long settled.

We enclose the memorandum with a request that this is given wide coverage.

As citizens of Mumbai committed to the rule of law and human rights for all, we would like to place on record our appreciation for the manner in which the Mumbai Police under your stewardship handled the potentially explosive situation at Azad Maidan on Saturday. Though better preparedness and bandobast before the protest would have undoubtedly helped, once violence broke out, the mature and handling by the police without being further provoked by the behavior of the protesters ensured that the situation was brought under control, and that a potentially volatile situation did not spread to other areas. Sir it is critical to ensure that there is no further fallout of Saturday’s violence.

We would also like to condemn of the use of provocative slogans and resort to violence by some of those on the stage and in the crowd assembled to protest, as reported in the media. We strongly condemn the attack on policemen and misbehavior with women police officers as has been also alleged alleged in media reports that must have caused deep anger among the law and order enforcement machinery. The attack on the media is most deplorable, as also the destruction of public property. Any issues that any individual or group has with the media, selective portrayals or biases—if any– need to be furthered through discussion and dialogue not violence and instigation.

While the right to protest is a democratic right, the duty and responsibility of peaceful protest must lie with not just the authorities but responsibility must also be taken by organizers. (Justice Srikrishna in his report on the 1q992-1993 violence, had, relying on the earlier recommendations of the Justice DP Madon Commission report that were never implemented, recommended that  deposits need to be obtained from organizers of protests to ensure that damages for any losses could be recovered from this deposit). We suggest that the Mumbai police immediately apply this recommendation.

There have been reports that some provocative photographs of the situation in Burma were shown or talked of and the appeals to the media made. In this connection we would like to offer the following information. Since mid-June 2012, photographs allegedly depicting the horrific plight of the Rohingyas,­ who happen to be Muslims of Burmahave been widely circulated on the internet. (Annexure A)

Yesterday, after Saturday’s violence, as we were checking the authenticity of these out, we found, that some, though not all of them were actually not of authentic and were altered/morphed on the computer. This information has also been put out by a blogger who appears to be from Pakistan.

We attach some of these below for your consideration.

We would also like to humbly state that reviving the vibrant and collective effort of the Mohalla Committee—with ordinary citizens not politicians—is critical given that misconceptions and misgivings must have been caused across communities after Saturday’s incident. This is also necessary to ensure that there is no spill over resentment and anger with other, ordinary Muslims following the conduct of a handful of compatriots of the community on Saturday. The month of Ramzan, followed by Eid after which the festival of Ganesh Chaturthi will be both a strain and challenge to the Mumbai police. We hope that under your leadership, maturity and calm governs public behavior, not retaliation by the police or provocation by any other sections of society.

Social media is lying to you about Burma’s Muslim ‘cleansing’

Social networking sites are abuzz with news about Muslims being killed in Burma.You can see the sporadic posting of pictures by different people with captions like ‘Muslims killing in Burma’, ‘Muslims slaughtered by Buddhists in Burma’ and so on.

Thus, I took on the mission to sort the truth out for myself once and for all and researched some pictures that I felt were dubious. Below are a few pictures and their original copies. You can evidently see the gross difference between them and how they are thrown out of context. 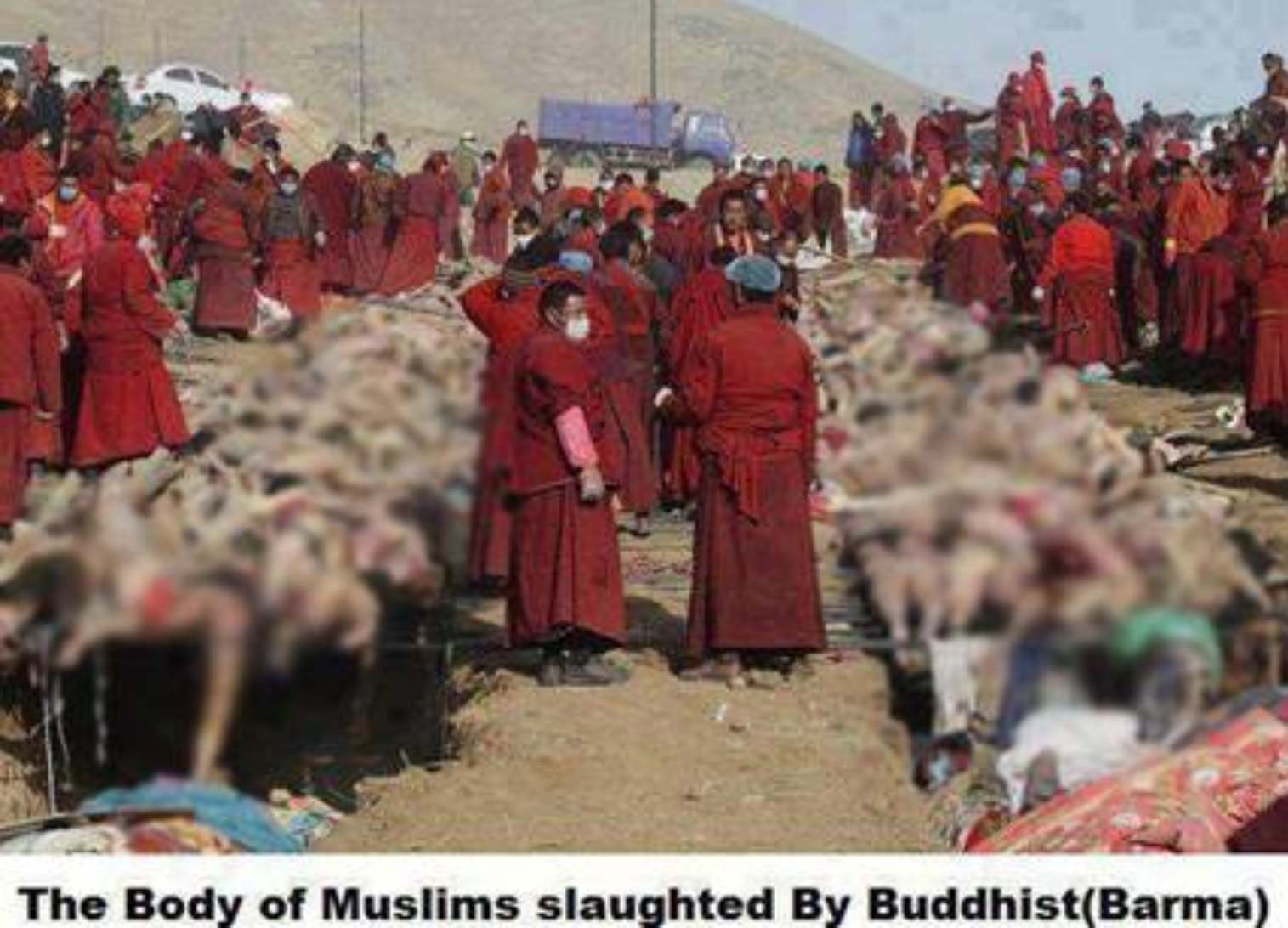 I have found the original version which reads differently to the the one posted on the social networking site. 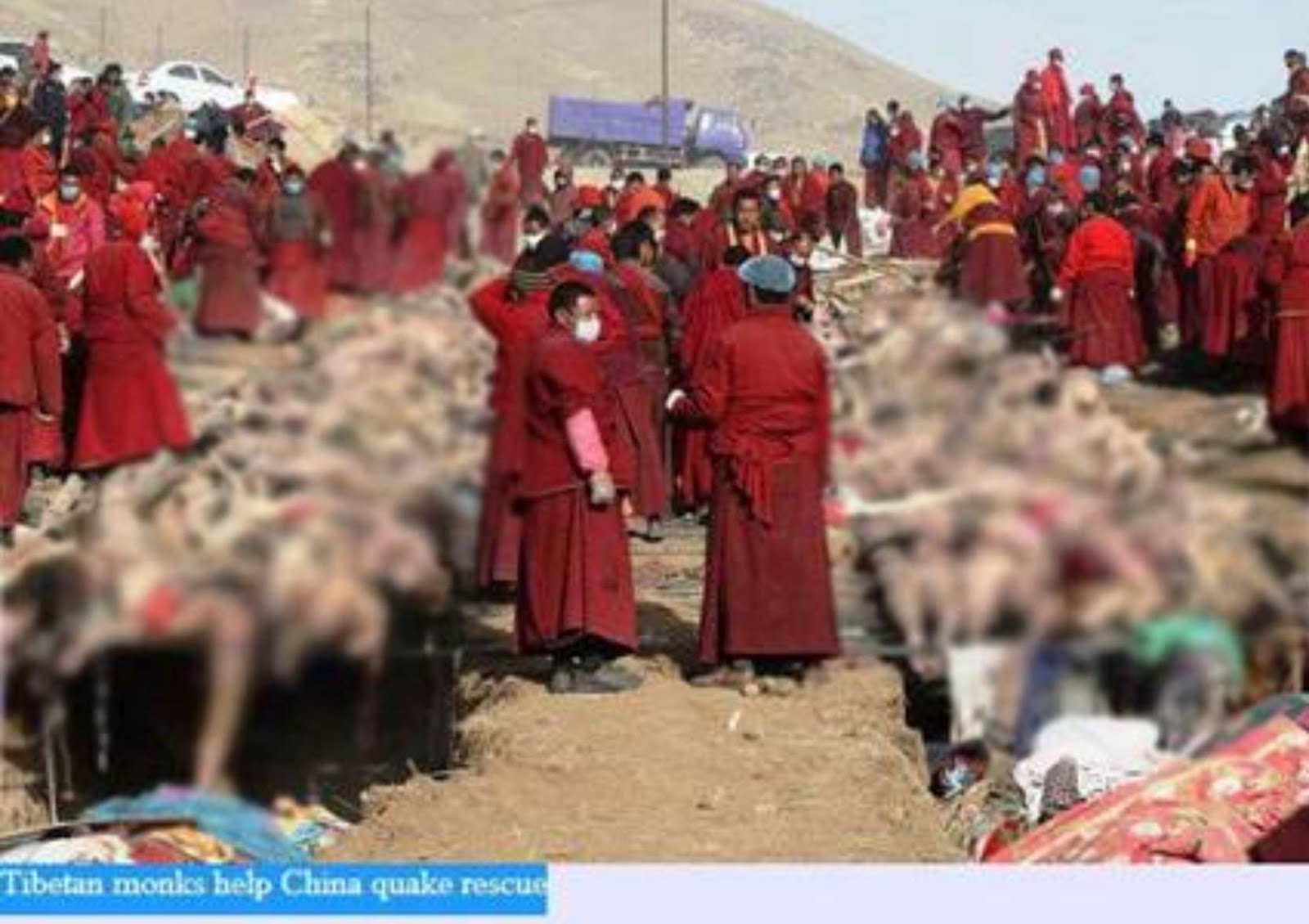 This picture was taken in 2010 after an earthquake in China and captures the efforts put in by the Tibetans to help rescue the victims. Now, Islamic political parties and some other elements are sharing this image as Muslim killing and their slaughter in Burma. 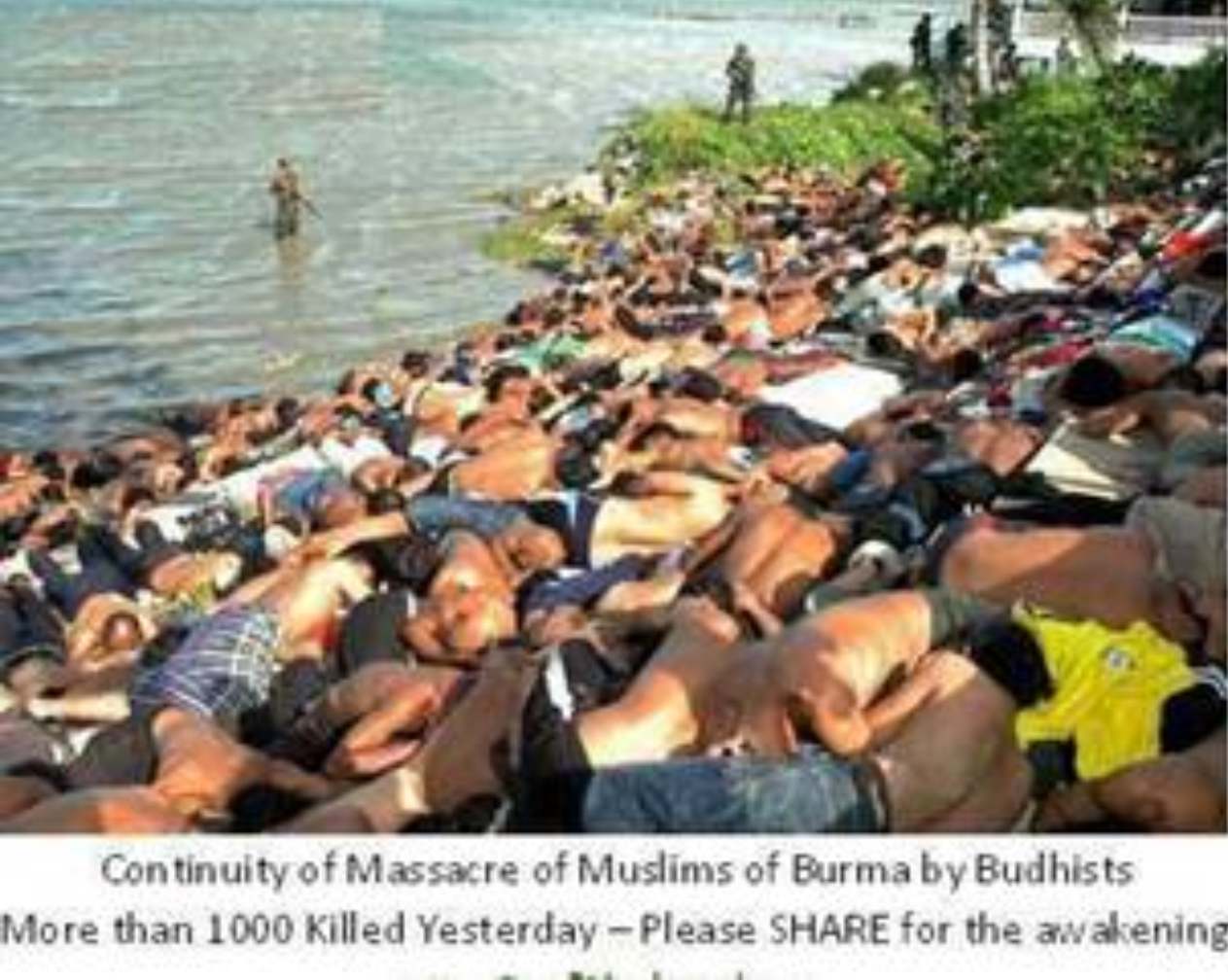 The original, as you can see below, is taken in Thailand in the year 2004. This picture shows protesters that were tear-gassed outside the Tal Bai police station in Bangkok. This is roughly 1,409.9 km away from Burma! What is grossly negligent about these photos is the factual ignorance of the hate these misleading photos can culminate. 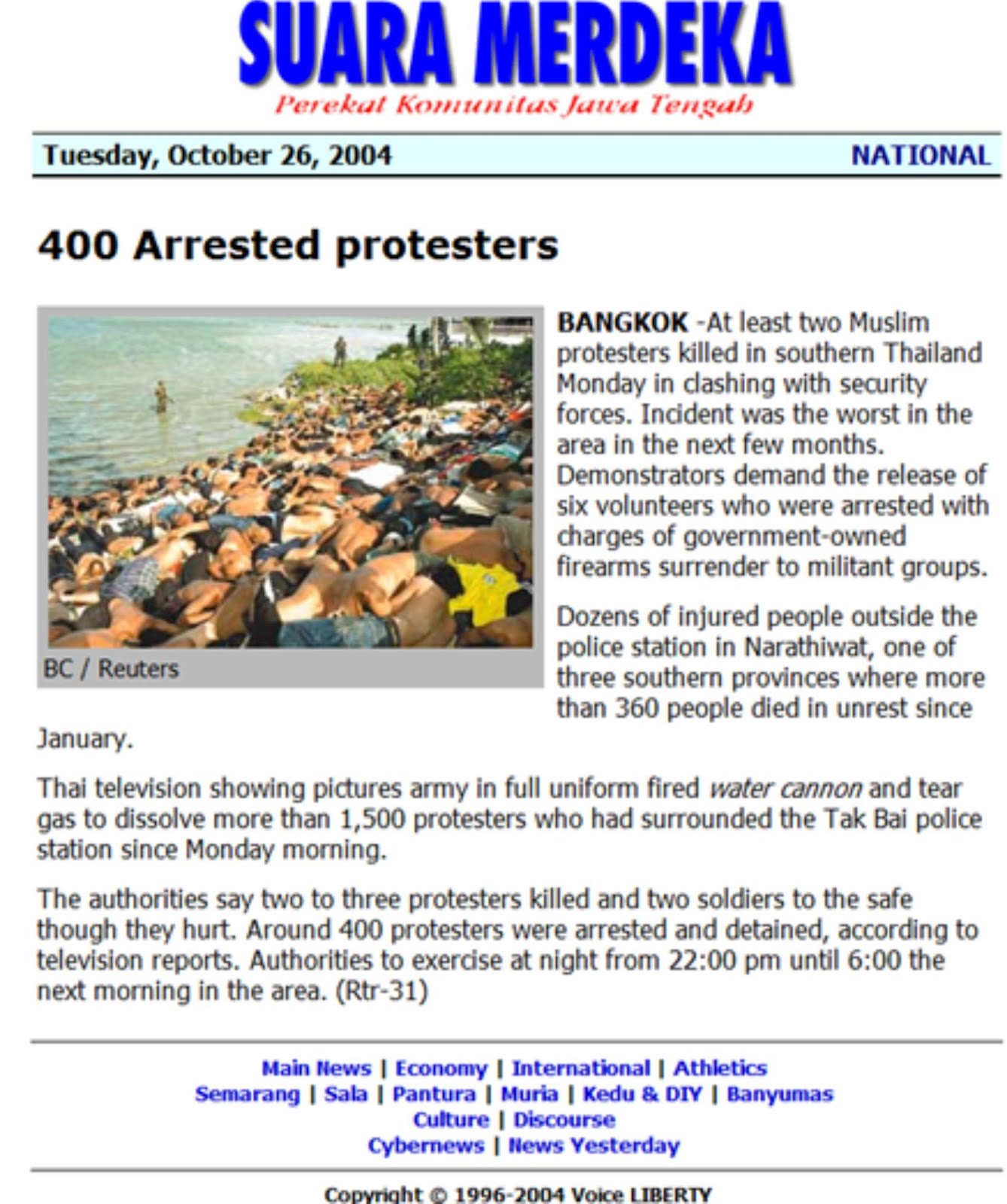 Below, please find another image which was posted online, this time with an imprint of Jamaat-e-Islami on the top left . It reads ‘Terrorists of Budhism of Burma kills 500 Muslims’. 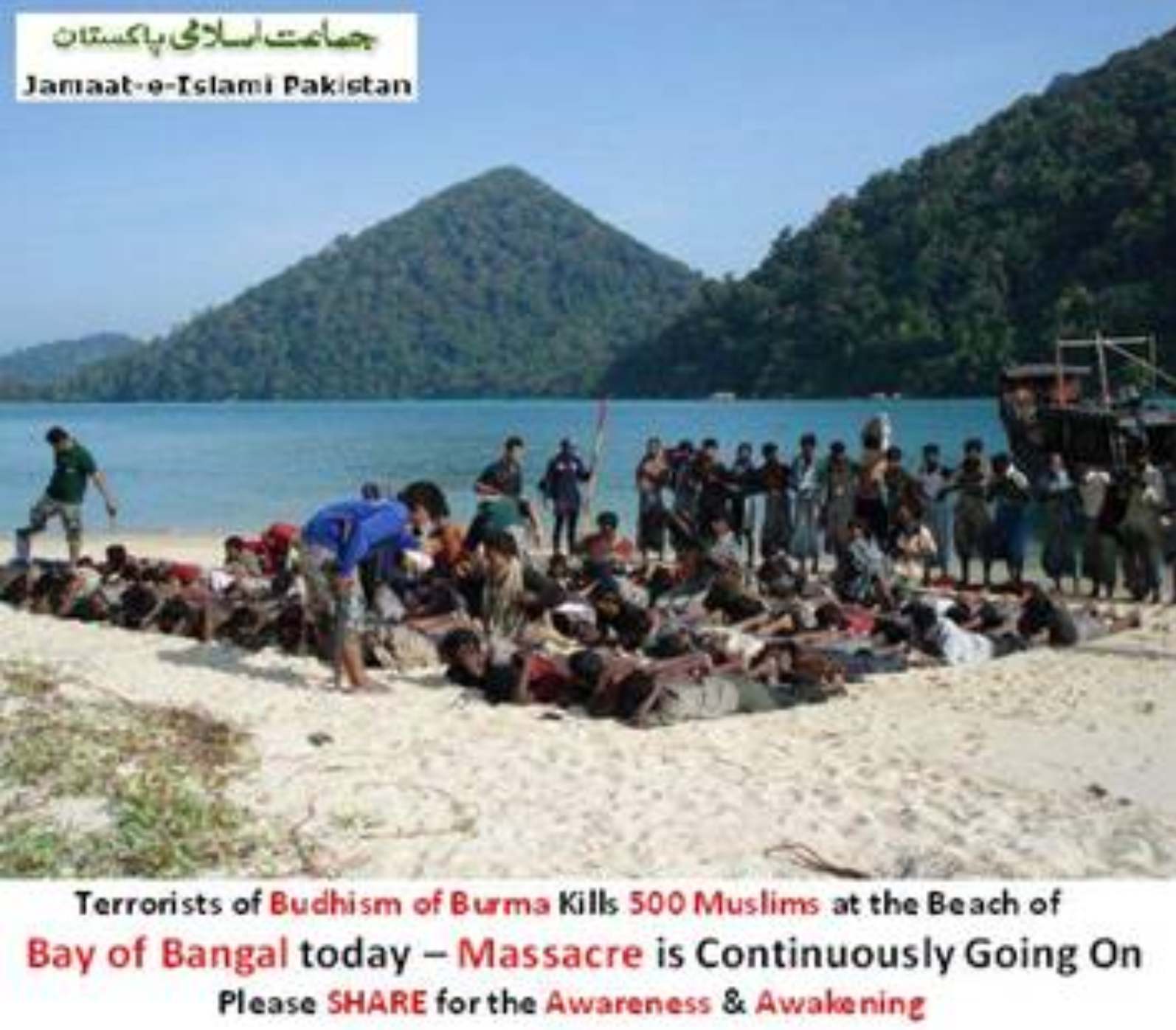 As you can guess, this is also a fabricated picture.

In reality, this image belongs to a Human Rights violation incident by the Thai authorities against the Rohingya ethnic minority of Burma. These refugees were detained for a few weeks and then sent off drifting into the sea.

Here is another instance of such fallacy spreading across the social media sites regarding the massacre of Muslims in Burma. 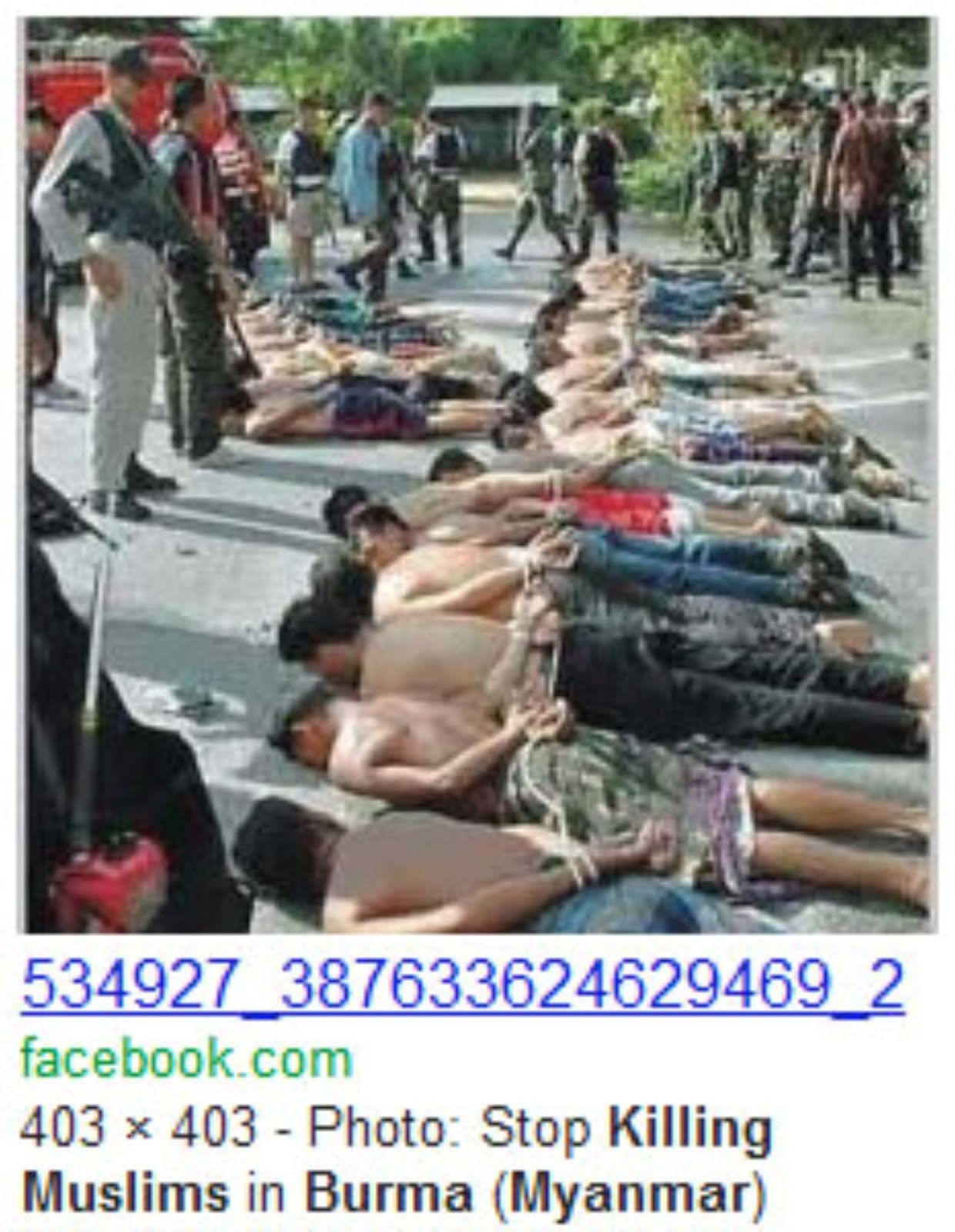 This picture is extremely misleading considering that the original image was about the riots in Thailand that took place in 2003! Now, take a look at the image below and observe how it is blown out of context. 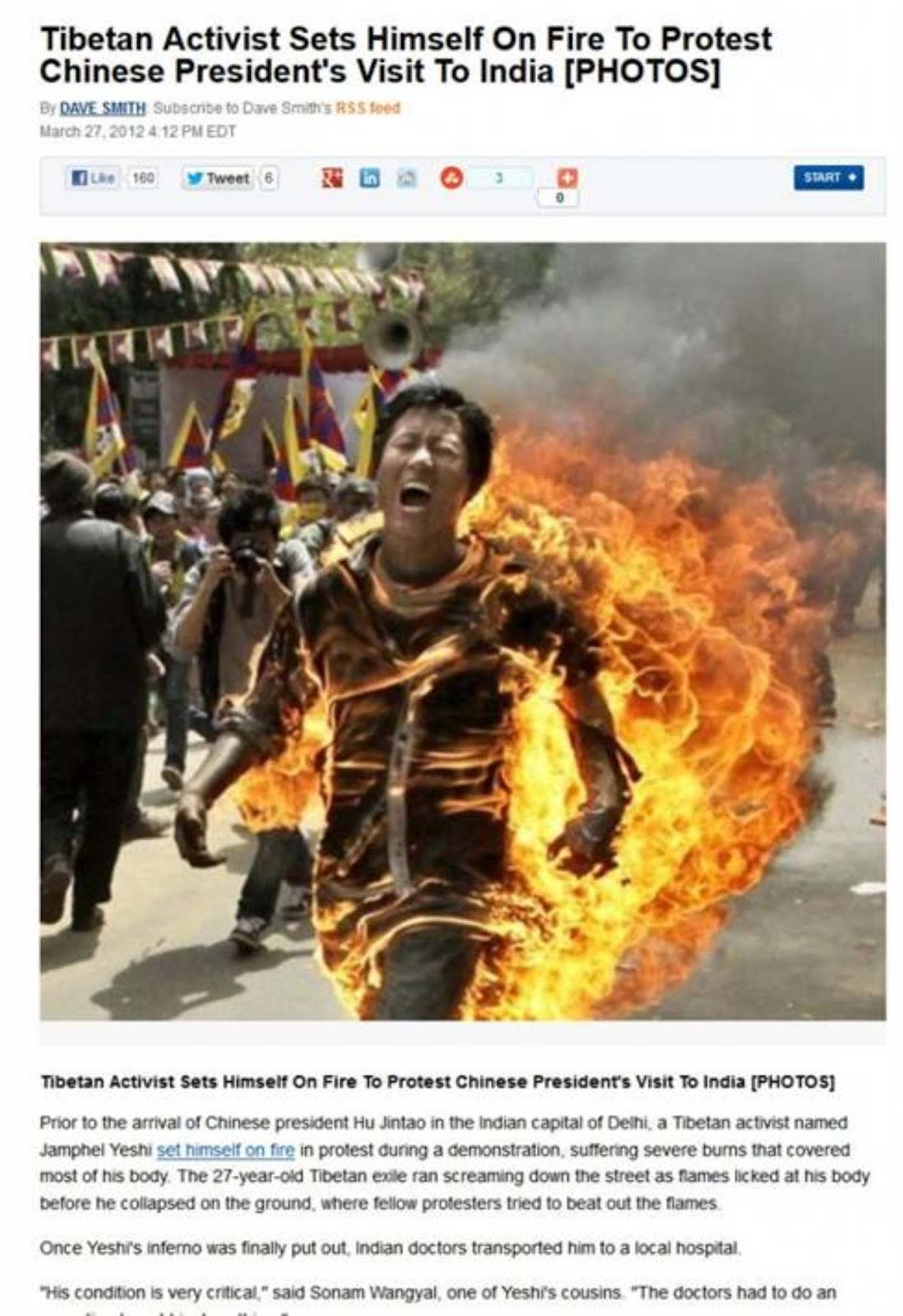 The original picture is not even remotely close to what the picture above states. In fact, a Tibetan protester had set himself on fire in protest prior to the arrival of Chinese president Hu Jintao and that too in Delhi.

I do not deny the killings of Muslims in Burma – not even for a minute.

I think it is horrific and I am sympathetic towards the immense loss being suffered by my Muslim brothers and sisters abroad.What I am against is being lied to.

Imagine the amount of lies we are being fed through these pictures. How can one trust any image online if such drastic manipulation and editing is being done to cater to someone’s political or personal agenda?’

Social media and networking sites, if used properly, can be an impressive tool in spreading awareness amongst its users, but it can be an equally dangerous median as well if misused.

These images are false and are only igniting hatred and prejudice in our youth.

We need to become more vigilant and aware of the credibility and authenticity of  pictures we browse through. It only takes one wrong image to push us over the edge towards extremism.

Who do you think is more misleading?

Irish rape victim tries to take her own life in India #Vaw
Walmart ordered to pay $188 million in Pennsylvania wage theft lawsuit
Protests against Afzal Guru's hanging at Jantar Mantar, 21 detained
Gujarat girl writes to Sonia to get father's body back from Pakistan