Two journalists booked in Tripura for reporting on anti-Muslim violence 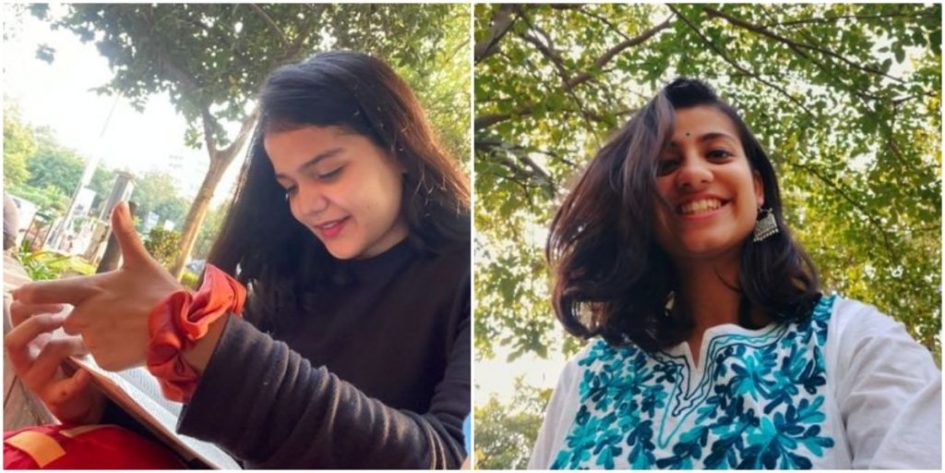 amriddhi K Sakunia (left) and Swarna Jha, two journalists at HW News Network have been booked by Tripura Police while reporting on anti-Muslim violence unleashed by Hindutva groups in the northeast state.

Samriddhi K Sakunia and Swarna Jha, two journalists at HW News Network have been booked by Tripura Police while reporting on anti-Muslim violence unleashed by Hindutva groups in the northeast state.

“@Jha_Swarnaa and I, the correspondent at @hwnewsnetwork have been booked under 3 sections of IPC at the Fatikroy police station, Tripura,” Samriddhi tweeted on Sunday morning.

The FIR is lodged by Kanchan Das of Vishva Hindu Parishad, a Hindutva group that was behind the week-long assaults on minorities in the state.

The complainant said that the journalists were a part of the criminal conspiracy to damage the communal harmony of Tripura and malign the Vishwa Hindu Parishad and the Tripura’s BJP government. He also alleged that Samriddhi and Swarna made an “instigating speech” against the Hindu community and the Tripura government while visiting people from the Muslim community in the Paul Bazaar area. https://platform.twitter.com/embed/Tweet.html?creatorScreenName=MaktoobMedia&dnt=true&embedId=twitter-widget-0&features=eyJ0ZndfZXhwZXJpbWVudHNfY29va2llX2V4cGlyYXRpb24iOnsiYnVja2V0IjoxMjA5NjAwLCJ2ZXJzaW9uIjpudWxsfSwidGZ3X2hvcml6b25fdHdlZXRfZW1iZWRfOTU1NSI6eyJidWNrZXQiOiJodGUiLCJ2ZXJzaW9uIjpudWxsfSwidGZ3X3NwYWNlX2NhcmQiOnsiYnVja2V0Ijoib2ZmIiwidmVyc2lvbiI6bnVsbH19&frame=false&hideCard=false&hideThread=false&id=1459695859906400258&lang=en&origin=https%3A%2F%2Fmaktoobmedia.com%2F2021%2F11%2F14%2Ftwo-journalists-booked-in-tripura-for-reporting-on-anti-muslim-violence%2F&sessionId=ca60ffe9dda790e100fdceb46ce9bd8c0a295394&siteScreenName=MaktoobMedia&theme=light&widgetsVersion=f001879%3A1634581029404&width=550px

Meanwhile, Samriddhi said she and her colleague aren’t allowed to move outside from their hotel.

“The police arrived yesterday at the hotel around 10:30 at night and served the FIR copy in the morning 5:30am. We were supposed to leave for the capital Agartala but have been not allowed to move despite full cooperation. There are around 16-17 police deployed outside our hotel,” reads her tweet.

The case was registered under IPC Sections 120B (Punishment of criminal conspiracy), 153A (Promoting enmity between different groups on grounds of religion, race, place of birth, residence), and 504 (Intentional insult with intent to provoke breach of the peace), according to the FIR accessed by Maktoob.

Samriddhi Sakunia, who had been live-tweeting and covering news of the violence in the state since the beginning of violence, said that she will be putting out a statement soon iterating all the intimidation she had to face while covering the Tripura violence soon.

Tripura’s BJP government and state police have been claiming that there was no law and order problem in the state and no mosques were burnt by Hindutva groups despite media including Maktoob reported several anti-Muslim crimes across the northeast state.

More than 100 people including journalists, lawyers, Muslim scholars, politicians, and rights activists have been booked under draconian UAPA and several sections of IPC so far after they carried out fact-finding visits to violence-hit areas and shared the news on social media regarding Tripura violence against Muslims.

The first of these UAPA cases were filed against two lawyers, Ansar Indori and Mukesh, who were part of a fact-finding team investigating the violence against minorities in the state. Charges were filed against them after the fact-finding team’s report, ‘Humanity under attack in Tripura; #Muslim lives matter’, was published which highlighted the vandalisation of at least 12 mosques, nine shops and three houses belonging to Muslims.

Following this, Tripura police arrested four members of a Delhi-based Muslim NGO, Tahreek Farogh e Islam, who carried out a visit to Tripura. All four who were charged under UAPA were sent to 14 days in police custody by Dharmanagar Court.

In another complaint filed on 3 November, Tripura police had claimed 102 social media accounts were responsible for spreading “objectionable news items/statements,” and the account holders were charged under draconian UAPA.

Three days ago, Shyam Meera Singh along with two lawyers Mukesh, Ansar Indori- booked under UAPA over fact-finding report on Tripura violence- have moved the Supreme Court for the quashing of the FIR filed against them under the draconian UAPA

The Supreme Court agreed to an early listing of the plea.

International journalist unions like CPJ, several press clubs in the country, and many politicians including key Opposition leader Rahul Gandhi condemned Tripura police actions and urged the BJP government to immediately drop the terror investigation into journalists, activists, and Muslim leaders for their social media posts and fact-finding visits.