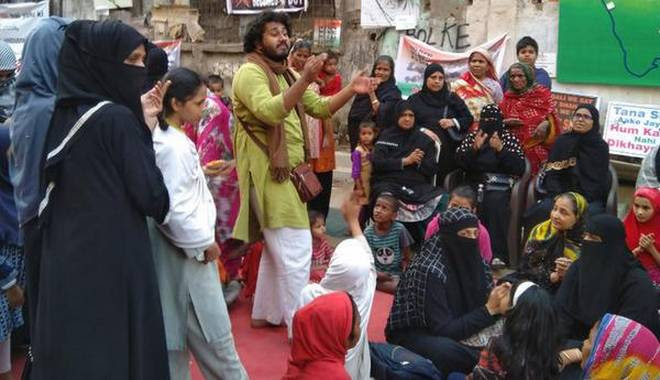 Driver overhears passenger speak against CAA, takes him to cops instead of destination
Be afraid: BIG BROTHER IS HERE. Instead of letting him go, cops grill Jaipur poet for hours, go through his text messages and chats

A Jaipur-based poet on Wednesday night was driven to the Santacruz police station without his knowledge by an Uber driver, who had heard him talking over the phone to a friend back home about the anti-CAA/ NRC protests around the country.

The driver, identified by the police as Rohit Singh, a native of Bhopal, told a stunned Bappadittya Sarkar as two policemen suddenly appeared to haul him to the police station:

“You think we will just sit and watch as you people go about destroying the country.”

Sarkar, 23, was on his way from Silver Beach café in Juhu to his friend’s house in Kurla around 11 pm when around 20 minutes into the ride Singh requested if he could stop to withdraw cash from an ATM. Sarkar had no problem. He realised what was happening only when the cab stopped outside the Santacruz police station.

Sarkar, who performs at festivals across the country and was on stage at the Kala Ghoda festival on February 3 and has since sung almost every day at Mumbai Bagh — the non-stop sit-in against the CAA/NRC at Nagpada – said the driver told the police: “Sir aap isko andar lo. Yeh desh jalaane ki baat kar raha tha. Mere paas pura recording hain” (Please arrest him. He was talking of setting the country on fire. I have recorded the entire conversation.) The police interrogated Sarkar for close to two hours before he was let off at around 1 pm after the intervention of a lawyer, who had been alerted by his friends after receiving a distress message. But before the cops let him walk, they gave him a piece of advice – “Avoid wearing this red scarf you have around your neck and don’t carry your ‘daphli’ everywhere. These are delicate times.”

Sarkar, who was staying with a friend in Kurla, moved overnight to another place fearing the driver would track him down as he had the details of his drop location. “The taxi driver’s one line kept ringing in my head. He told me in front of the cops – “Main tujhe kahin bhi le ja sakta tha, shukar karo main tujhe police station le kar aaya hoon” (I could have taken you anywhere. Consider yourself lucky that I brought you to a police station.) The police, Sarkar said, questioned him about his family, work, friends, ideology and political views, all the while running through his WhatsApp chats and phone book records. “They asked me all sorts of questions like who sponsors your travel, what is my source of income, they even asked me to furnish the email address of Kala Ghoda festival organisers, even asked me to recite some of my poems,” Sarkar said. Sarkar was also asked about Communist countries, the literature he read, his parents’ salary, and why he went around attending protests. “I told them we must oppose the CAA to save our country.”

The cabbie, however, was not grilled, nor was any action initiated against him for abducting Sarkar. When Mirror contacted the Santacruz police, a senior officersaid no further action was required as none of them filed a complaint.

A police officer told TOI that the driver, in his statement, had claimed that he had taken this action as an alert citizen. “The driver said he got suspicious on seeing the way the passenger was dressed and more skeptical after he overheard something about ‘protest’ and ‘Shaheen Bagh’. We questioned both the driver and the passenger but did not find anything suspicious. The driver was unable to provide any recordings of the passenger’s communication with his friend either.” Another officer said they followed due procedure by questioning both parties and on finding no evidence against Sarkar, didn’t file an NC or FIR.

When contacted, an Uber spokesperson said: “As soon as the incident was brought to our attention, we took it up on priority. We are in touch with both the rider and the driver and are reviewing the matter.” Till late Thursday evening, no action had been taken against the driver for his behaviour.

Sarkar, who performed at the Mumbai Bagh again on Thursday, said he didn’t want to press charges against the taxi driver as his fight is not against an individual. “My fight is against a way of thinking. I am fighting injustice and the atmosphere of fear that is being created in the country. My experience should be a wake-up call. It can happen to anyone,” he said.

After a Twitter furore, Uber issued a statement on Thursday apologising to Sarkar. The online cab service said it had taken note of the complaint against its driver.

Sarkar’s parents — his mother works as a counsellor in a college and father is an employee of a private company – still don’t know about his ordeal.