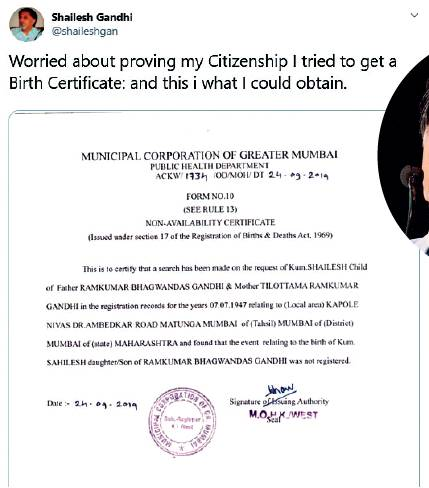 Shailesh Gandhi, who had approached the BMC last year, was told that his birth records from 1947 could not be found; he put up BMC’s response on Twitter, triggering a fresh debate on NRC, CAA

Amid ongoing protests against the implementation of Citizenship Amendment Act (CAA) and National Register of Citizens (NRC), former RTI commissioner Shailesh Gandhi, 72, started a fresh debate after BMC could not find his proof of birth from 1947. Gandhi, a resident of Mumbai, had applied for a birth certificate last year. However, the civic body could not find his birth records and expressed its inability in October 2019.

Gandhi had posted BMC’s reply on social media late Friday night, with the remark, “Worried about proving my citizenship, I tried to get a birth certificate and this is what I could obtain”.

Speaking to Mirror, Gandhi expressed his helplessness in the matter. “A birth certificate is a basic document to prove citizenship. In this case, it is not available in the government documents, so how do I prove my birth? This situation can be faced by anyone,” he said.

The information activist also pointed out the flaws in the NRC exercise. “The government has not described how they are going to implement NRC? What about nomads, orphans, project-affected people, and those internally displaced? The CAA has now come to our doorstep. So, except Muslims, everybody else will be able to say that I was in India before the particular date and they would be protected,” he said.

The city has been witnessing protests opposing CAA and NRC almost every day. Hundreds of people are voluntarily turning up at these peaceful gatherings to voice their concerns.

A two-day students’ protest in the first week of January at the Gateway of India received huge support from all sections of society. For the first time in many years, students in Mumbai came out in large numbers to express solidarity with their JNU peers who were attacked by goons. On Friday, over 7,000 women had gathered at YMCA ground in Agripada to raise awareness about the pitfalls of CAA.

Reacting to Gandhi’s predicament, social activist Feroze Mithiborwala, who has been part of the anti-CAA and NRC campaigns, said that the government must put an end to NRC. “If a public figure like Shailesh Gandhi can’t get a certificate from the authorities, imagine what will happen to Muslims, the denotified tribes and the Dalit community. Implementation of CAA and NRC is going to be a bigger disaster than demonetisation. I am hoping that the Supreme Court will listen to the public outcry and do justice,” he said.

Dolphy D’Souza, core committee member of Hum Bharat Ke Log, an NGO at the forefront of these protests, said that Gandhi is trying to convey a message that NPR, NRC and CAA are fraught with problems. “They will end up creating panic among the citizens. Some people have lived in this country for over 50 years but it would be challenging for them to prove citizenship. The government has not applied its mind. Its policies would only end up dividing us on religious lines. There are far more pressing issues like unemployment, farmer deaths, slump in the market