Umar Khalid and the Hate Republic 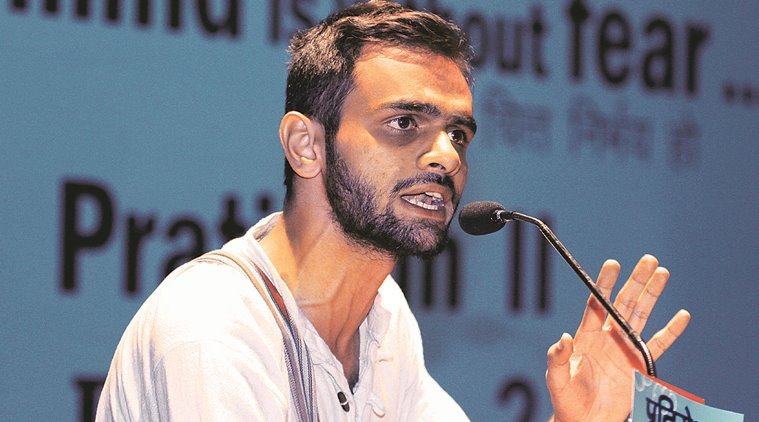 Umar Khalid, a PhD scholar of Jawaharlal Nehru University was attacked by a gun-wielding assailant inside the premises of the Constitution Club on 13 August. It should be noted that this incident took place in a high security zone barely 500 metres away from the Parliament House just two days before independence day. Ironically, he had gone to attend an event titled “Khauff Se Azaadi” (freedom from fear), organised by a non-governmental organisation, “United Against Hate.” The police reaction was curious; they wanted to ascertain whether the incident was staged. As reported in Telegraph (2018), Meenakshi Lekhi, Bharatiya Janata Party member of Parliament, ridiculed Khalid saying that he was playing the victim card (2018). And some Hindutva bigots on social media lamented the fact that he was still alive and swore that it would not be so the next time around.

Khalid could well have been dead but for his friends who managed to throw off the killer’s aim. He would have just been added to the list of martyrs—Narendra Dabholkar, Govind Pansare, M M Kalburgi and Gauri Lankesh—who were allegedly gunned down by right-wing assailants. While the Prime Minister delivered his speech from the rampart of the Red Fort, trying to impress people with his characteristic hyperboles and half-truths, he did not express an iota of remorse over the “jungle raj” we have seen over the past four years.

Who Is the Mastermind?

The next day, Khalid tweeted identifying the person who tried to shoot him. He was caught on CCTV camera. On 16 August, two men—Darwesh Shapur and Naveen Dala—claimed responsibility for the attack as “a gift of independence” by circulating a video on WhatsApp. The police would otherwise display amazing intelligence in discovering whatever documents required to establish a non-existent trail in an allegedly Maoist network. However in this case, despite having pictures of the assailants, their identities, and posts on WhatsApp it took more than a week for the Delhi police to arrest these men.

The point, however, is not about the police, whose credibility, in many cases, is an enduring question mark. It is the temerity of the assailants to publicly challenge institutions that reveals the brazen impunity they enjoy under the current dispensation. After this shameful incident, the zeal with which trolls from the Hindutva camp celebrated it, is perhaps more revealing: “Really condemn the unsuccessful attempt of shooting!! Try lynching him next time … This kind of anti-national elements must be eliminated as soon as possible …”; “Khalid hum sharminda Hain, tum jaise abhi bhi zinda hain” (Quint 2018). Are these not incitements to murder? Are these people not identifiable? The police that threatened Arun Ferreira’s friends who tried to testify to his innocence when he was arrested in 2009 with the Maoist tag, that they too would be booked as Maoists (Srinivasan 2017), simply ignore such cognisable crimes. This is not the first time that hate
speech has gone unpunished on social media. This is still about the symptom and not the disease. Even if the man who pulled the trigger is booked, the real culprits will still be at large. Khalid issued a statement on this attack where he wrote:

This hate campaign against me has been going on for last two years. There is no evidence, only lies. There has been no charge-sheet, only media-trial … BJP leaders openly support those who say they will do “tukde tukde” of the country … The real culprits were people breeding an “atmosphere of hatred, bloodlust and fear” from their seats of power and those providing a complete impunity for “assassins and mob lynchers.” (Firstpost 2018)

Along the Murder Trail

Dabholkar, who crusaded against superstition through his organisation, the Maharashtra Andhashraddha Nirmoolan Samiti (ANIS), struggled to get the anti-superstition bill passed in the Maharashtra assembly. It was opposed mainly by the orthodox Hindu outfits like the Hindu Janajagruti Samiti (HJS), a sister organisation of the Sanatan Sanstha, a Goa-based extreme right-wing Hindu organisation headed by one Jayant Athawale. Two days before Dabholkar was gunned down on 20 August 2013, a caricature, published in the Sanatan Sanstha mouthpiece, Sanatan Prabhat, depicted ANIS as a demon being slain by the HJS, Hindutvavadi outfits and Warkari organisations. It was captioned “Dharmdrohi kayda bargalala” (anti-religion bill falls flat). It clearly portended what followed. A day after, Athawale wrote in Sanatan Prabhat, “It’s God’s grace to die in a manner in which Dabholkar died. It [instant death] is better than dying of a prolonged illness or suffering from pain induced by surgical procedures” (India Today 2013). Although these were clear enough clues, politicians rhetorically spoke of banning the organisation but without any initiative to interrogate Athawale for his suggestive remarks. On 16 February 2015, Pansare and his wife were fired upon, killing him and paralysing his wife. Two more murders would follow: Kalburgi’s on 30 August 2015 and Lankesh’s on 5 September 2017.

The Sanatan Sanstha appears to be the anchor for all these murders. Founded in 1999 with the goal to establish a Hindu rashtra, it openly professes slaying of evildoers and had a systematic timetable to reach its goal in 2023, which strikingly coheres with the Sangh Parivar’s versions. It terms the minorities, especially Christians and Muslims, as the biggest obstacles and speaks of the need to defeat even the police and military to build a Hindu rashtra (Deshpande 2015). It considers “Violence towards evildoers is non-violence” and not to slay (murder) an evildoer as sin (Narayan 2018).A list of 46 such evildoers was recovered by the Karnataka Special Investigation Team from Amol Kale, “the mastermind” of Lankesh’s murder that contained the names of many progressive persons, including leading Goan writer Damodar Mauzo, provoking an ongoing agitation in Goa to oust it (Yogesh 2018). The public record of the Sanstha is replete with gory details, every bit of which is unlawful, which could shame even the worst terrorist but none could touch it. Can this happen without the blessings from those in power?

Much of the exposure of the murder conspiracy was accomplished by the Karnataka police, but the Maharashtra police groped in the dark although most of the crime network existed on its soil and the first of its crimes took place there. It was only after the reprimand from an “exasperated” bench of justices S C Dharmadhikari and Bharati Dangre of the Bombay High Court to the Central Bureau of Investigation as well as the government that the Anti-Terrorism Squad (ATS) raids in various places exposed the hate infrastructure of the Hindutva forces. In four raids carried out in Nalasopara and Pune since 9 August, the ATS has reportedly recovered 20 crude bombs, a large cache of firearms and ammunition, including 16 country-made pistols, five airguns, 10 pistol barrels, seven pistol slides, nine partially-assembled pistols, 30 live cartridges, six pistol magazines, three partially-made magazines and springs and triggers for firearms, gelatin sticks, 26 detonators, safety fuse wires, 150 grams of white powder wrapped in newspaper, two bottles labelled “poison,” batteries, soldering equipment, PCB circuits, relay switches, a hand-drawn partial circuit diagram, circuit drawings and printouts on the composition of explosives. Apparently, and as the ATS reported, this cache is not just meant to kill individuals but to hatch bigger conspiracies to polarise people to achieve their nefarious goal of a Hindu rashtra (Raut 2018).

Those who were arrested at different points in time—Vaibhav Raut, Sharad Kalaskar, Sudhanva Gondhalekar and Shrikant Pangarkar, Sameer Gaikwad, Virendra Tawde, Amol Kale, Parshuram Waghmare—have been associated with hardline Hindutva outfits operating in Maharashtra, Goa and Karnataka such as the Sanatan Sanstha, its affiliate HJS, Sambhaji Bhide’s Shri Shivpratishthan Hindusthan and Pramod Muthalik’s Sri Ram Sene. All these organisations are ideological babies of the hydra-headed Sangh Parivar. It is believed that the chief of Sanatan Sanstha hypnotises people into human robots to execute whatever is tasked to them. But the Sangh Parivar has over the years hypnotised masses of people into Hindu automatons who turn gau rakshaks to lynch innocent people to death and come out on streets in thousands in support of a rogue criminal as they did in protest against the arrest of Vaibhav Raut in Nalasopara.

It is this venom that benumbed masses into enduring personal hardships unleashed by demonetisation, blinded them to the destruction of the nation with jingoistic nationalism and made them celebrate lies as truth on to the path of self-destruction. It is the same venom that actuated them to brutally beat up Sanjai Kumar in Motihari, Bihar just for commenting irreverently about Atal Bihari Vajpayee on his Facebook page. It is this venom that spilled out in the form of tweets in the wake of unprecedented human tragedy as in Kerala: “Please donate to keep Kerala Hindus. Christians & Muslims worldwide raising lots of money to help mainly their own people and agendas.” This tweet by the United States-based Rajiv Malhotra was retweeted in the thousands, including by the likes of Mohandas Pai (Sudhir 2018).

This hate republic is out to destroy India!

Firstpost (2018): “Umar Khalid Issues Statement a Day after Attack in Delhi, Says ‘They Can’t Scare Us into Silence,” 14 August, https://www.firstpost.com/india/umar-khalid-issues-statement-a-day-after….

Srinivasan, Sandhya (2017): “Speaking Out against Wrong Actions Is Both a Right and a Duty,” InfoChange News, June, http://www.infochangeindia.org/human-rights/42-human-rights/analysis/554….

Sudhir, T S (2018): “Could There Be Anything Worse Than the Right Linking #Kerala Floods to Beef and Sabarimala”? 19 August, https://www.newslaundry.com/2018/08/19/could-there-be-anything-worst-than-the-right-linking-keralafloods-to-beef-and-sabarimala.

Anand Teltumbde ([email protected]) is a writer and civil rights activist with the Committee for the Protection of Democratic Rights, Mumbai.