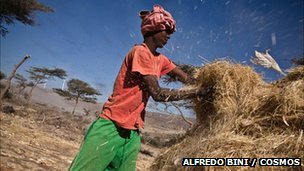 In recent years large-scale acquisitions of farmland in developing countries have caused concern
11 May 2012 Last updated at 15:23 GMT,  BBC NEWS

The voluntary rules call on governments to protect the rights of indigenous peoples who use the land.

It is estimated that 200m hectares, an area eight times the size of Britain, has been bought or leased over the past decade, much of it in Africa and Asia.

But aid agencies warn it will be very difficult to ensure the guidelines are implemented everywhere.

AFP quoted Clara Jamart from Oxfam as saying this was just a first step and urging caution.

“Governments have no obligation to apply these measures,” she said.

There has been growing concern about so-called land grabs, when foreign governments or companies buy large areas of land to farm.

In Africa countries such as Ethiopia, South Sudan, Democratic Republic of Congo and Sierra Leone have all signed major land deals with foreign investors.

It is hoped this new agreement will secure access to land, fisheries and forests for millions of poor people who have historically used the land.

The document took three years to draw up and calls on governments to be transparent about land deals, consult local communities and defend women’s rights to own land.

It also emphasises the responsibility of businesses and multinational corporations to respect human rights when they move in to an area.

Problems can arise because in many parts of Africa local farmers, herders and gatherers do not have any formal documents for the land they use, which is often owned by the state.

But this is not always the reality and human rights organisations have highlighted cases where tens of thousands of people have been forcibly removed from their ancestral homelands to make way for foreign investors.