By Rajiv Shah
A recent United Nationsreport predicts that, contrary to Government of India claims that Make in India campaign will boost urbanization, the country’s urban population is unlikely to grow fast enough. The report says, in 2014, India had 32.4 per cent population living in urban areas, and it will rise to 50.3 per cent by 2050, the pace of growth is likely to go down, and will be far away from the world average.
The data in the report show that, in fact, the pace of urbanization in India has been going down ever since the 1970s, when the annual rate of change of urban population peaked 3.94 per cent, the highest in a decade. In 1980s the rate of change 3.24 per cent, in 1990s it was 2.65 per cent, and in 2000s it was 2.60 per cent.
In the current decade 2010s, the data show, the rate of change urban population in India would be 2.36 per cent, and the deceleration in the growth rate would continue till 2050, the report predicts. In 2020s it would be 2.16 per cent, in 2030s 1.86 per cent, and in 2040s 1.51 per cent.
Titled “The State of Asian and Pacific Cities 2015: Urban transformations – shifting from quantity to quality”, the data in the report suggest that while in 2014 the world’s average world population was already more than 20 per cent than that of India – 53.4 per cent of the world population lives in urban areas as against India’s 32.4 per cent – the gap is unlikely to get bridged sizably even in 2050.
Thus, the report predicts that the world’s urban population in 2050 would average 66.4 per cent, and as for India it would be 50.3 per cent, suggesting an overall gap of over 16 per cent. The report has been jointly prepared by the United Nations Human Settlements Programme (UN-Habitat), and the United Nations Economic and Social Commission for Asia and the Pacific (ESCAP). 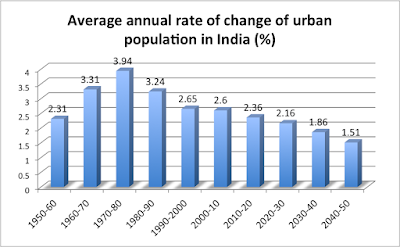 Quoting top Indian urban development expert Prof Amababh Kundu and others, the report says, “In India, natural population growth was the main contributor (50-60 percent) to urban population growth over the period 1961-2001, followed by rural-urban migration (around 20 percent) and reclassification (up to about 15 percent).” However, it adds, “Between 2001 and 2011, the respective contributions of these three drivers to city growth had changed considerably: only about 44 percent resulted from natural growth, 25 percent from migration, while reclassification accounted for nearly 30 percent.”
The data give credence to a study by top American thinktank scholar Yukon Huang suggesting that the Government of India’s unprecedented insistence in favour of urbanization as the only panacea for achieving a higher growth rate is “highly premature”, as it emanates for lack of analysis of ground realities.
Huang said in a recent study for the Carnegie Asia Programme that there is a complete lack of “incentive” for rural people in India to shift to the urban areas. His view is in sharp contrast to India’s Planning Commission successor Niti Ayog Arvind Panagariya, who in an official blog said the Modi government’s Make in India campaign would trigger migration of workers to urban areas.
Panagariya had quoted an NGO survey to say, “Indian farmers and their children recognize the superior prospects that faster-growing industry and services can offer… 62 percent of all farmers say that “they would quit farming if they could get a job in the city.”
The UN report indicates low rate of urbanization growth continues because “urban informal employment in India has a very high rate of urban informal employment.” It insists, “This high rate has persisted despite recent economic growth. It is comprised of a small formal salaried workforce (20 percent).”
—
Click HERE to download the report