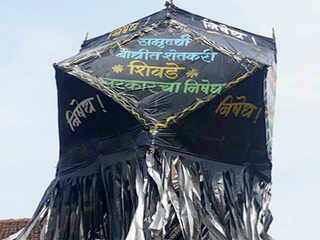 Farmers in about ten districts across the state, that fall on the path of CM Devendra Fadnavis’s ambitious project – the Mumbai-Nagpur Highway – celebrated black Diwali to register their protests against MSRDC’s ‘forceful acquisition’ of their lands. The Samruddhi Mahamarg Shetkari Sangharsh Samiti (SMSSS), the body that spearheaded the unique protest, had urged all those affected by the project to put up black Diwali lanterns in their houses. The Maharashtra State Road Development Corporation Limited (MSRDC), however, claims that there was no need for the farmers to do so as the land acquisition process was being done in the negotiated manner and forceful land acquisition hadn’t been resorted to, yet.

Farmers from villages like Shivde and Sonambe in Nashik and Fatiyabad in Aurangabad were protesting against the government. Most of the affected farmers put black lanterns at their houses with slogans against the Samruddhi corridor.

Of the 8,450 hectares needed for the highway, MSRDC needs to acquire around 7,500 hectares from the farmers, the rest is available with government departments including forest.

The proposed highway will reportedly bring Nagpur and Mumbai within 8 hours of reach. And travel time from Mumbai to Aurangabad will be 4 hours and from Aurangabad to Nagpur, another 4 hours, claims MSRDC.

Raju Desale, member, SMSSS told Mumbai Mirror, “17 Gram panchayats have passed a resolution that they don’t want to sell their land for this project. As these villages in Nashik district have Adivasi population, they are protected by The Provisions of the Panchayats (Extension to Scheduled Areas) Act.” Desale also added that “The alternative land options are not explored by the government. Farmers are strongly against selling their irrigated land. We also demand one rate for one project. So far the highest rate for the land has been given in Shahapur. The disparity is huge and needs to be addressed.”

MSRDC is acquiring land under ‘Direct Purchase Scheme’, where farmers are selling their land at the market price.

MSRDC Joint Managing Director K VKurundkar calling the protest ‘politically motivated’ said, “Till October 16, we have acquired 983 hectares of land and Rs 700 crore have been paid to farmers through RTGS. We have received consent for additional 2,700 hectares land. The so-called protest has no support of real farmers, they are cooperating with us and many teams are already present in the villages communicating the scheme.”

MSRDC is planning to acquire a maximum portion of land by December end after the earlier deadline of October was extended. Unless MSRDC gets hold of at least 80 per cent of the total land, they won’t be able to start the project work. Mumbai Mirror has earlier reported on how the state government was facing difficulties to secure a loan for the project.

SMSSS is, however, miffed with the MSRDC as it purportedly failed to announce land acquisition prices in many villages. Farmers who own irrigated land are up in arms with the agency and MSRDC, too, has accepted that in some villages they have been unsuccessful in convincing them. 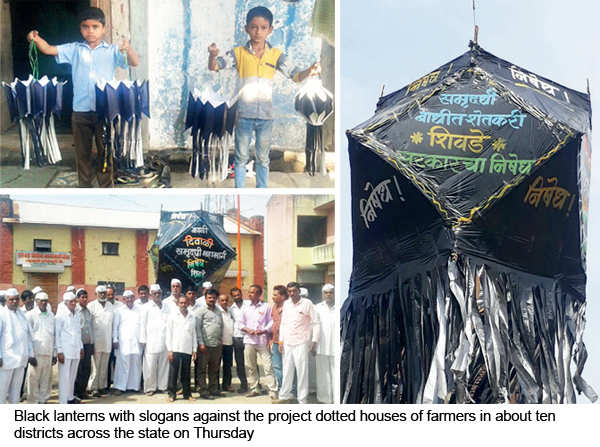