Unveiling the (masked) memories of the Afghan War 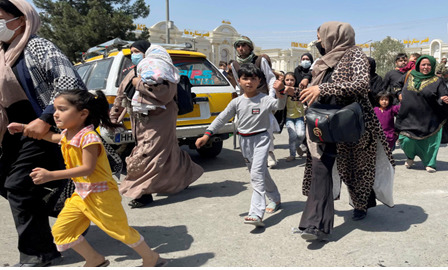 “The heart’s memory eliminates the bad and magnifies the good; and (thanks) to this artifice we manage to endure the burdens of the past.”

War in all its forms has rendered it impossible to lead mentally healthy lives. This can be generalized without any hesitation. Humanity has been rife with battles and conflicts ever since the concept of private ownership developed. Resource distribution began to impact all aspects of human interaction. In addition to this the development of different philosophies and their recording as written history added to the conflict. Disagreements that would stay confined in a small group began to get publicized and archived permanently.

Human beings have been archiving and memorializing their thoughts and experiences much before writing originated. Over time, an unspoken hierarchy developed between an individual and the community at large. “It is in this context that memory, conceived not only as a faculty of human understanding, but as the organ of continuity and cohesion in the collective sphere, began to play a paradigmatic role in social theory.” (1)

Understanding how collective memories are shaped through individual recollections while also diverging from them in order to be uniform, acceptable and convenient has been a sought after project by scholars of various fields. Memory studies extensively analyses the “use of memory as a tool for remembering the past”. It also examines the various shifts; social, cultural, cognitive, political and technological, affecting how, what and why individuals, groups and societies remember and forget.

Under the shadow of the recent horrific developments in Afghanistan, with Taliban taking over most of the country, it becomes imperative especially for feminist activists and scholars to listen to the buried and silenced voices of Afghani women and vulnerable identities. The various facets of the relativity of ‘truth’ of the multiple narratives from across major societal identities need to be heard and recorded. The U.S. – Afghan war that kicked off with the 9/11 attacks has a context that is unknown to many. A mainstreaming of this history has rendered it impossible for individual perceptions to be traced or archived. Stories are being lost, as are lives. What is going to happen to the popular narrative when shared standards for truth disappear and the subaltern is allowed to speak?

The variant interactions between the State and the vulnerable population of Afghanistan do not exist independently. The role of dominant countries at the international stage and their relation to the U.S. plays a major role in Afghanistan. Who is responsible for the Taliban takeover? What are the transactions of the victims through various forms of ‘resistance’ to the mainstream narratives? How does the violence perpetrated by both the state as well as non-state parties on vulnerable classes hold scope for archival? The streamlining of certain memory narratives as absolute ‘Truth’ and their portrayal as history while silencing other narratives/ memories, in order to come to terms with the past as a society, reflect the intricate structures that value some memories more than others. The idea of collective/ structural amnesia comes into play. (2)

In war zones like Afghanistan, the fluidity of memory becomes quite apparent and narratives are constantly remodeled and retold. The accounts of different subjects vary according to the motivations and the vantage positions they hold in the war. This holds the potential to bring forward the silenced testimonies of the most marginalized people bearing the brunt of the war from several sides. A contestation to the mainstream history of the U.S. – Afghan War is important to unmask the memories of the individuals and set free their bound subjectivities, while being careful of not collating the memories with the truth without informed research.

The premise of this article is to understand how certain memories are shaped into historical narratives and how the doubly-subaltern Afghan individual isn’t allowed to ‘speak’ (Gayatri Spivak, Can the Subaltern Speak?). The exploration of the intersections of individual and collective memory and their interdependencies also come into play. The manner in which the stories/literature by women, homosexuals, Hazaras, and other marginalized people deviate from the popular discourse, letting loose the individual ways of experiencing and coming to terms with the past speak volumes of the resistance at play. The present memories of the past/war however remain the spatio-temporal constructedness of all forms of memory that become manifest within the mainstream or the collective narrative. Individual memory cannot exist in isolation without its connectedness to collective memory. Every entity experiences events within the specific context i.e. manifest via their lived-experience in negotiating through the collective consciousness of the community.

The world knows of Afghan War mostly through the U.S. lens- capitalists, imperial, western and Islamophobic. There should be a focus particularly on the Afghan war stories from vulnerable intersections of the Afghan society- women, homosexuals, refugees, Hazaras etc. The writings, songs, films and every existing source of stories should be sought and studied; understood and empathized for. This can help open up multiple narratives and reflect the relativity of truth. More than the immediate threat of violence by Taliban to the vulnerable sections of the Afghani society, the roots of our understanding of the Afghan War should lie in the larger comprehension and analysis of how War impacts people differently and how certain memories go down as history while others are lost forever. This can be achieved through a focus on testimonies (fiction or nonfiction) that creates a contestation to the majoritarian and collective memory that has been marked as history. The aim is to investigate “the impasses between memory and forgetting that are present in debates on the preservation and dissemination of archives associated with conflicts, wars and periods of political oppression.” (3)

“My heart is black as tobacco smoke!/If you don’t believe me, listen to me sing

Naga Accord: The Mouse that Roared
Repeal AFSPA: 15 years on Irom Sharmila's hunger strike
The fearless journalist-activist Gauri Lankesh #Obituary
India needs a thinker, not a despot on its peacock throne #NOMOre_2014