UP -Dalit women sit on indefinite hunger strike in Shabbirpur 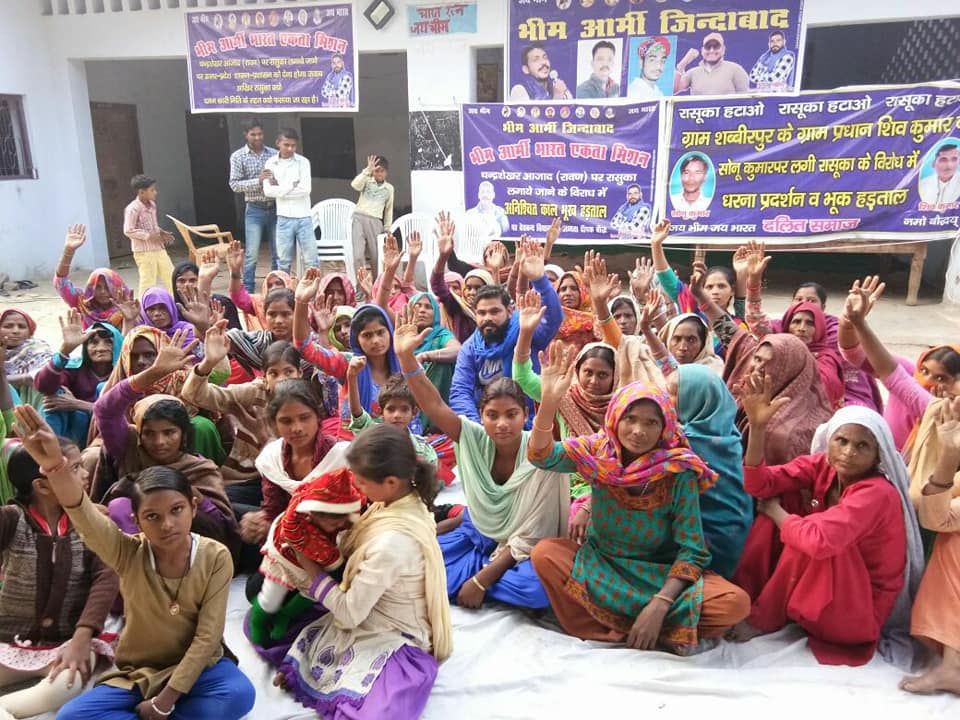 Around 50-60 Dalit Women have been on an indefinite hunger strike in Shabbirpur village in Sahranpur District of UP for the past six days.

This is following the National Security Act (NSA) being imposed on the Bhim Army Chief Chandrasekhar Azad along with two other members of the Bhim Army. One of them is the Pradhan of Shabbirpur Village, Shiv Kumar and the other is Sonu Kumar another inhabitant of the village and member of the Bhim Army. The women have entered sixth day of the strike demanding the withdrawal of charges and immediate release of Chandrashekhar, Shiv Kumar and Sonu Kumar, initiate CBI Inquiry into the incidents of May 5th, adequate compensation to the villagers for the losses suffered among several other demands.

Shabbirpur was the same village where members of the Rajput community had attacked the Dalit community on May 5th.

This has sparked off hunger strikes in other villages of Sahranpur. Three women had been admitted to the hospital on the third day of the hunger strike. The local police have been intimidating the villagers with threats asking them to end the strike. They have cordoned off the village and are not letting outsiders to enter.

A team from Pinjra Tod along with some student activists had gone to visit and extend solidarity to the ongoing strikes in Shabbirpur. Young members from Bhim Army have been organizing in several villages of the district. In Shabbirpur, the strike is taking place outside a Bhim Army school and the classes have been temporarily suspended.

The women have resolved to continue the strike indefinitely till all the demands are accepted. We salute the struggle by these defiant women against this Brahmanical nation state.