UP Police Tortured Children Swept Up In CAA Protests 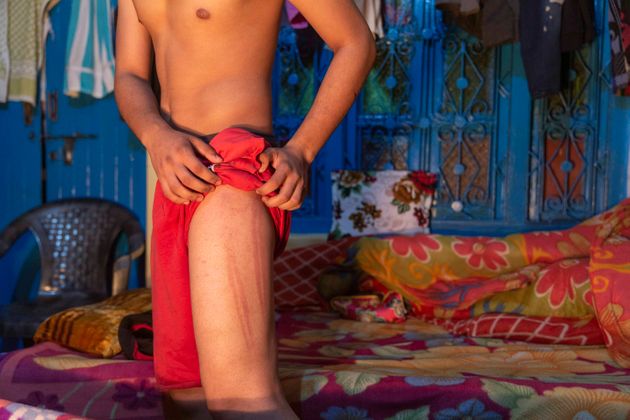 A 15 year old child shows bruised caused, he said, by a violent beating at the hands of the Uttar Pradesh police.

Five children share detailed accounts of 48 hrs of violent abuse at the hands of the Uttar Pradesh Police, after they were detained as part of a crackdown on a demonstration against the controversial Citizenship Amendment Act.

NAGINA, Uttar Pradesh — The Uttar Pradesh police detained at least 5 minors, one of whom is only 13, at the Bijnor Police Cantonment and tortured them over a period of 48 hours before releasing them, HuffPost India can establish based on interviews with the children and their parents, a review of photographs in local papers, and videos from the incident.

These instances of torture have occurred in the context of UP Chief Minister Yogi Adityanath’s call for his state government to take “revenge” against those protesting against the citizenship law, and the Narendra Modi government’s attempts to violently silence any opposition to it. The policemen told the children they were beating them to teach them to never attend a public demonstration again, said the minors who endured the abuse.

While HuffPost India has documented the accounts of these 5 children through face-to-face interviews, the total number of minors detained and tortured by the police in Nagina, an urban settlement in Bijnor, could be as high as 22.

At least one child is still in police custody, his father and elder brother told HuffPost India. The boy’s name appears in a First Information Report (FIR) of the incident filed by the police, but his date of birth printed on his Aadhaar card puts his age at 14 years. The child’s father said that the police insist he is an adult and have refused to listen to them. HuffPost India has reviewed the FIR and the child’s Aadhaar card.

All of the children interviewed by HuffPost India were Muslims, and their ages ranged from 13 to 17 years old.

The torture described by the five children range from repeated violent assault, forced stripping, sleep deprivation, and being forced to watch the police assault adult detainees confined in the same facility where the children were held.

21 of these detainees were released in batches, Khalil said, on the grounds that they were minors. The last batch was released at 1 am on December 23. HuffPost India interviewed five of the 21 who were released, verified their ages by examining their Aadhaar cards, and documented their clearly visible injuries. HuffPost India also made efforts to reach out to the remaining children who were released but were told their families were too afraid to speak to the press. As mentioned earlier, one child is possibly still in police custody.

HuffPost India is withholding the names of the tortured children and their families to protect their privacy, and to shield them from possible reprisals by the police.

On Thursday, December 19, 2019, elders from Nagina’s Muslim community learnt of a message calling for the town’s markets to remain shut on Friday, December 20, 2019, to protest against the Indian Parliament’s passage of the controversial Citizenship Amendment Act early this month.

The act, introduced by Narendra Modi’s BJP-led Union government, offers a passage to Indian citizenship to Hindu, Buddhist, Sikh, Jain and Parsi citizens of Pakistan, Afghanistan and Bangladesh but excludes Muslims. Critics say the new citizenship law must be seen in the context of the BJP’s promise to introduce a citizenship verification exercise called the National Register of Citizens, which could target millions of poor and vulnerable Indians who may not have the right documents to prove their citizenship.

The law has been met by vociferous, largely peaceful, public demonstrations by Indians of all faiths, who argue that making citizenship contingent on religion violates the secular tenants enshrined in Indian’s constitution.

In Nagina, the Muslim community elders were worried, given the Uttar Pradesh Police’s reputation for brutality and extra-judicial killings. The police had also enforced Section 144 in the town, which forbids large public gatherings.

The next day, Friday, December 20, they appealed for calm.

“At the Friday prayers, we told the congregation to disperse immediately after the afternoon prayers and not to demonstrate,” said Mufti Mohammed Owais Akram, the Imam of Nagina’s Jama Masjid.

After the prayers, eye witnesses said, most of the worshippers dispersed but a small group of young men decided to hold a march from the mosque to a statue of Mohandas Gandhi to mark their opposition to the citizenship law, and to show solidarity with the millions of people protesting across the country. The police tried to stop the protestors and a scuffle broke out.

The police attacked the demonstrators with tear gas and batons and some protesters threw stones at the police. As the protests fizzled out, the police rounded up at least 100 demonstrators. But at least 21 of those detained were children who had mingled with the demonstration in Nagina’s narrow twisting streets, said Rehman, the elected Chairman of Nagina’s municipal council.

“We asked the police to release the children and be lenient with the adults as no public property was damaged, but they didn’t listen,” Rehman said. “We condemn any violence by demonstrators, but the police response has been completely disproportionate.”

Torture at the station

On Friday evening, 13-year-old A had stepped out of his house to find his little brother when he said he was swept up by the police. 15-year-old B was returning home from tuitions after school. 16-year-old C, who works as a daily wager, was out in the streets as there was no work that day. Meanwhile D, who is also 16 and works in a furniture shop, and E, who is 17, were caught up together in a crowd that tried to escape the police by sheltering in an empty shop. When the police stormed the shop, D and E were also caught.

Thereafter, all five children found themselves in a police bus that first went to the police station in Nagina, after which they were shifted to a large hall in the police lines at Bijnor, the district headquarters. In the hall, they were kept with a large group of adult demonstrators arrested by the police.

India’s Juvenile Justice Act, which was last updated in 2015, lays down clear guidelines for how state police forces must deal with children suspected of breaking the law.

For instance, Section 10 clearly states, “no case, a child alleged to be in conflict with law shall be placed in a police lockup or lodged in a jail.”

Rather, any child detained by the police must be placed under the charge of the special juvenile police unit or child welfare police officer, and must be produced before before the Juvenile Justice Board within 24 hours.

Needless to say, it is a crime for the police to violently assault children in their care.

The beatings were so violent that one child’s ankle had to be put in a plaster cast when he was released, the others sported vivid bruises and swollen limbs.

“I’ve lost track of  how many times I was beaten,” said 13-year-old A. “I was beaten all over my body. I’ve been beaten so badly I need help to walk or eat.”

15-year-old B said he was hit so hard that a policeman’s stick broke. “They said, this is a strong one, hit him some more,” B said.

On Friday night, as the temperature fell to 6°C, the beaten and bruised children were given a smelly, thin mat to either spread out on the cold concrete floor, or to wrap around themselves. But the children were not allowed to sleep. Every child HuffPost India spoke to confirmed that they were beaten if they fell asleep.

“I pressed my fingers against my eyelids to keep my eyes open,” said 17-year-old E. “If you nodded off, the guards would hit you with a stick.”

All five children also confirmed a particularly absurd and humiliating form of torture: the police offered the prisoners water, but when they asked to urinate, they were taken to the bathroom one at a time. On the way back, a group of policemen would ambush each prisoner and thrash him.

“First the police gave us all water, which we drank because we were thirsty,” said B. “But then we realised we would be beaten every time we wanted to pee.”

The beatings, the children said, were almost like a game for the policemen.

“At one point, they made an adult prisoner strip naked and show us his bruises,” E said, a statement two other children confirmed.

“No one else will admit to it, but they made us pull down our pants and show our bruised backsides to the guards,” said B.

A, the 13-year-old, appeared particularly traumatised by being forced to witness the still-more brutal torture of the adult detainees. “They were lined up facing the wall and then guards would hit them across their backs with sticks,” he said.

All five children also described one particularly terrifying incident — which several adults in Nagina mentioned as well: One detainee’s leg was broken so badly that his shin bone poked out from under his skin. HuffPost India was unable to confirm the identity of this detainee or if this incident actually occurred — however, all five children and several members of the Nagina’s Muslim community spoke of this incident.

The torture, as mentioned earlier, went on for over 48 hours before the children were released. The adults, who appear to have been brutalised as well, have been transferred to the Bijnor jail.

Throughout the torture, the children were repeatedly asked who asked them to attend the protest against the citizenship law. “The police kept asking, ‘Who paid you to protest? Did a political leader call you?’” said E. “And then they would beat us.”

When B was finally released, a policeman hit him one final time. “He said, ’Now if there is any protest again, you better not attend. Now you know what we’ll do.”