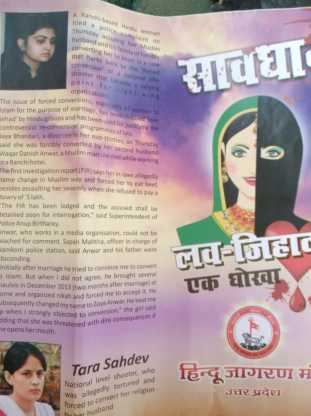 A grab from the assault video
MEERUT: A Muslim youth and his two brothers were allegedly beaten up by members of Hindu Yuva Vahini and Vishwa Hindu Parishad on Saturday afternoon at a Baghpat court for carrying out ‘love jihad’, as the youth was set to marry a Hindu woman from Punjab there.
A video of the physical assault — in which the right-wing men beat up the three brothers while dragging them from the court to the police van, even as the police can be seen watching — went viral on Sunday. While the woman was not beaten, another video showed the attackers abusing her for not being able to “find a better match for herself” even as a woman cop is taking her to the police van.

The couple had met in Punjab, where the man, Kaleem — a resident of Saharanpur— runs a salon near the girl’s house. They had started a relationship in 2016 and had been in touch through Facebook and WhatsApp after that. As their families were against the relationship, the couple had fled from Punjab to get married in the Baghpat court.

Baghpat superintendent of police Jai Prakash said, “On Saturday, it was reported that a couple in their late twenties had reached the Baghpat court to meet an advocate to get married. The woman was a Hindu and the man was from the minority community. Even as they were discussing about the procedure to get married, a crowd barged into the advocate’s chamber and started a scuffle with the man. Police reached the spot in a few minutes and then brought the couple and the man’s two brothers into custody to save them from the mob.”

A case has been filed under relevant sections of the India Penal Code (IPC) against unidentified people. Police is in the process of identifying the men seen in the video so as to push the investigation further, the SP added.

While police said that the brothers were thrashed by a “crowd” of people and that they are “unaware” if the assailants were members of Hindu organisations, the men seen in the video are locally-known faces of Hindu Yuva Vahini and Vishwa Hindu Parishad. In fact, members of both organisations told TOI on the record that they were present at the spot, but also claimed that nobody was beaten up.

Both Nitin Chaudhary, Baghpat district president, Hindu Yuva Vahini and Vicky Chaudhary, Baghpat city president, Vishwa Hindu Parishad admitted that they were present at the spot with their supporters, but denied allegations of physical assault. Nitin Chaudhary said, “Not only was the man trying to fool the girl by marrying her as a part of his ‘love jihad’ scheme, but he also had plans to sell the girl for Rs 50,000.” Chaudhary’s claim was, however, refuted by police.

“We have handed over the couple to Punjab Police because an abduction case was filed by the family of the woman against Kaleem in Barnala police station of that state. Punjab Police is investigating the matter. We have taken a complaint from the couple and on its basis we have filed a case against unidentified persons for assaulting Kaleem and his brothers,” said SP Prakash.