BY MICHELLE WILLIAMS —Based on principles of democratic decision making and egalitarian redistribution, the Uralungal Cooperative is proof that efficiency isn’t exclusively linked to capitalist production. 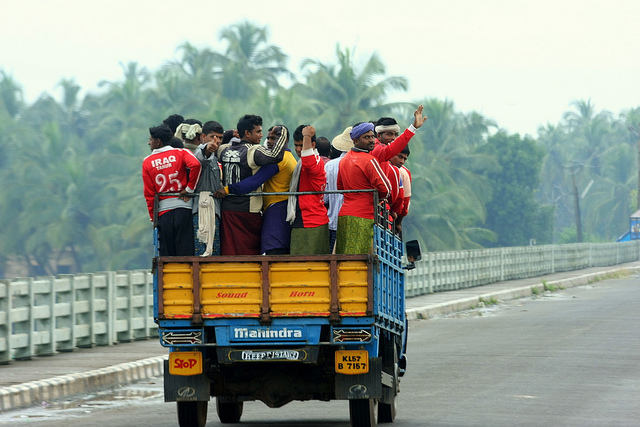 Workers in a truck in Kerala (representative image). Credit: Dhruvaraj S/Flickr (CC BY 2.0)

In Kerala, India, a remarkable worker cooperative has defied the predictions of mainstream economists for over 90 years. Uralungal Labour Contract Cooperative Society (ULCCS), a 2000 member-strong worker-owned construction cooperative, builds large infrastructure projects such as roads, bridges and building complexes. Named after the Uralungal hamlet in northern Kerala’s Malabar region, the Uralungal Cooperative has pioneered local-level alternative production, epitomising qualities of the solidarity economy such as democracy, equity, solidarity, reciprocity and integrative networks. These principles are encoded in the fabric of the cooperative through its members’s ethos, as well as through cooperative bylaws which describe the cooperative’s primary objective as serving members – that is, the workers of the cooperative – by ensuring secure, rewarding and well-remunerated work. To do this, it has pioneered democratic workplace organisation and egalitarian redistribution, even in the context of a highly competitive sector dominated by large, profit-seeking (and often corrupt) contractors.

ULCCS’s commitment to democratic and egalitarian principles harks back to its founding years in the early 20th century. In the 1930s and 1940s, Uralungal was at the vortex of political turbulence, when powerful peasant and workers’s movements sprang up in Malabar, the nationalist movement took a radical turn, and the Communist Party emerged as a hegemonic force in the area. In the cooperative’s formative years, this radicalisation of Malabar helped shape the ethos of an alternative economy based on democratic decision making, surplus subordinated to social goals, ecological sustainability and collective production. Over the years, the cooperative has used its democratic organisation, collective decision making and alternative ethos of people before profits to creatively overcome each new challenge.

Mainstream economists often predict that even if worker cooperatives emerge, survive and prosper, they will soon degenerate into a typical capitalist firm, losing any lofty principles of worker control and worker ownership. Against these arguments, the actual performance of worker cooperatives such as ULCCS stands out as beacon for inspiration and as experiences offering valuable lessons for future practice.

At the centre of ULCCS’s success is its commitment to participatory and direct democracy within the cooperative.

How do cooperatives ensure strict coordination and efficient production without the typical capitalist techniques of discipline and incentives? How do they ensure that worker ownership does not undermine the powers of supervisors or lead to workers shirking their responsibilities? More specifically, how did ULCCS succeed in creating a judicious blend of hierarchy and participation? To answer these questions, we must look at ULCCS’s experiences in developing a labour process that is both efficient and participatory.

The construction sites are led by site leaders chosen from among the workers, in a process through which only workers with proven managerial ability and who enjoy widespread respect and trust are selected. Workers and site leaders continually discuss the division of labour and procedures at worksites – for example, over a collective lunch (prepared by the cooperative). While there is a great deal of inclusive deliberation, once a decision is made, everyone must abide by it. Disobeying site leaders’s instructions, dereliction of duty, financial irregularities or deliberate lapses in performance can lead to disciplinary action – although such action is rarely needed.

Democratic processes are maintained through regular communication within the cooperative. Site leaders attend daily meetings with the board of directors. All site leaders, board members and technical staff attend weekly meetings while all worker members participate in monthly meetings where new developments are reported and where members can raise criticisms. Full financial statements are discussed at annual general meetings. While so many meetings involve time and energy, it also produces a sense of collective ownership, solidarity and common mission, enhancing productivity.

The major challenge for ULCCS in competing with private contractors is that the cooperative cannot cut costs by curtailing workers’s benefits or cheating on materials and specifications. The cooperative has always considered adherence to contract specifications a sacrosanct principle, which has contributed to its impressive reputation. Since India’s public works projects are notorious for corruption and manipulation, these limits create a very serious handicap.

The cooperative’s competitive edge comes from high labour productivity, stemming from both the effective use of technology and workers’s diligence and skill – a vital asset in the labour-intensive construction process. For example, the quality and cost of an ordinary macadam road depend on the thickness of different layers, the effectiveness of red earth binding, the evenness in the mixing of the tar and its timely application on the metal layer. Each step requires skill, diligence and commitment from workers. In construction, concreting similarly requires close cooperation among many workers. Moreover, workers motivated to maintain a schedule and avoid unnecessary waste are critical to the cooperative’s successful completion of projects on time. Thus, the skill and commitment of workers – not simply supervisors or managers – are the cooperatives’s major assets. ULCCS has prioritised active participation in decision making, while maintaining generous remuneration packages and positive working conditions.

Mechanisation has transformed worksites and many of the jobs involved in construction have become unnecessary or deskilled. Further, the shift in pace linked to mechanisation could alter workers’s sense of involvement and bonds of solidarity. Aware of these potential dangers, the cooperative has responded by deepening democracy in three ways, with a deeper commitment to transparent, open deliberation; reprioritising workers’s feedback; and improving its skills development programs.

Another lurking danger is the erosion of commitment among contemporary workers. Until recently, most members were relatives of the pioneering generation, but today many new workers lack kinship or local ties. Many participants worry about the quality of deliberations at the annual general meetings and the willingness of workers to do extra work has weakened. There is no easy solution to this trend other than continued education about the cooperative’s history, its traditions of commitment and sacrifice and the principles that have made the ULCCS what it is today. Thus, the survival of ULCCS as a genuine cooperative is political. It must generate values of cooperation in a society dominated by market values.

Michelle Williams is a member of ISA Research Committee on Labour Movements.

This article was originally published in Global Dialogue 6.1 (2016).

#India - Youth grasp reigns of revolution
Woman Beaten to Death for Refusing to Give Men Her Number #Vaw #WTFnews
India - Soon, you may opt to withdraw your Aadhaar number
Lok Sabha Bypoll: With Only Palghar in Its Kitty, 2018 Turns Out to Be BJP's Worst Year