Urban Naxals? Yeah, I have heard of them 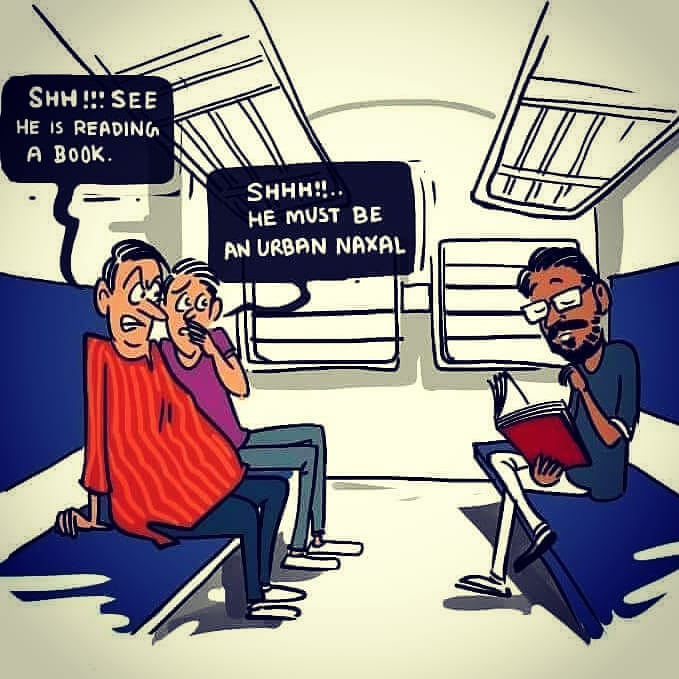 I was born into a middle class family with three kids. Yeah, my parents were respectable people (what did you think?), and not like some of those folks who have 7 or 8 children. Chee!

Despite the fact that both my grandparents came from the same village, my parents were respectable city dwellers.

They sent my siblings and me to proper city schools, where we learnt, among other things, how to speak in English.

I finished my school with decent marks and got an admission into a fairly well-known college.

I knew my parents could not afford to pay huge capitation fees – my father was only a clerk in a government office and my mother a house-wife – so I studied hard.

Though I played cricket every evening with my school friends, I made it a point to study for four hours every evening.

Despite scoring 87 per cent marks in my 12th standard, I did not get my much deserved seat in medicine because of this disease called reservations. And my seat was given to some lower caste person with pass marks. (Who knows what kind of a doctor he would make and how many persons he has killed until now?) That is why I say, reservations should be eradicated from this country so that everyone gets a fair chance.

Anyway, I opted for a course in computer science and learnt how to write codes. Somewhere along the way I also got an MBA and was fairly well qualified to get good a job.

Soon after I finished college, I got a job in a good company where I have been working for the last ten years.

As soon as I got a job, my parents found a match for me. The girl was from a similar background and had also done her MBA.

Though neither I, nor my parents believe dowry, her parents were insistent that they give their daughter something to begin her new life. After all, in our caste, we don’t sent girls to their homes empty handed.

Within 5 years of getting a job, I already had my own car and my own house. Though the EMI is a bit steep, but mine and my wife’s salary takes care of it.

Our only child studies in a very prestigious school, where apart from the basic reading and writing, he is also taught one musical instrument, public speaking and painting. Once a week he goes to a cricket camp. My wife wants him to become a cricketer, though I am sure that I want him to study well and become qualified, maybe even a doctor. But who knows?

Of course since both I and the wife are good with computers, we have already gifted him with an ipad. Though he is only nine years old, you should see how good he is with it.

My wife is very religious and offers pooja to different Gods through out the year and prays for our happiness and prosperity. I participate in all the rituals because that makes her happy.

I try to fulfill every need of my family and keep them happy. Just last week, I got a new 55-inch television because my son wanted to watch the India-England cricket series. I try to be a good father.
***

No, I don’t read about what is happening in far off places like Orissa or Chhattisgarh? Yes, my wife and I have been to a forest resort for a holiday in the first year of our marriage, but I must admit that I got bored of that place pretty soon. No TV, no internet (in those days) and nothing to do. Just jungle all around and mosquitoes….

No, bauxite mining or indigenous people mean nothing to me. Though, I must say that I do watch Discovery Channel (Hindi) regularly and have seen programmes about tribals from all over the world. I like the fact that they really dance well. I am told some of them even eat human beings… but then what can you expect from tribals? I sometimes think I should go to Africa for a holiday and see some real tribals, but my wife keeps saying that we should go to Europe. In fact, my son also has been asking for a foreign holiday, because many of his friends have gone abroad for holidays.

Urban Naxals? Yes, I have heard of them. They are the ones who are trying to divide India and assassinate the Prime Minister. If you ask me, those buggers should be shot dead or sent to Pakistan.
After all I am proud of my country and its government.

I am an Urban Nationalist.

Asma is a sometimes writer, a constant fighter, a disobedient dreamer