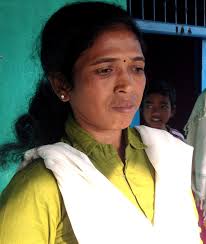 On 13th June, the Sukma police announced a successful encounter where a woman Maoist, Madkam Hidme, was killed in an encounter close to village Gompad, Konta Tehsil, Sukma district.
Villagers called up yesterday to say that this was incorrect and that Madkam Hidme was not a Naxalite, but a villager, picked up from her home, gang raped by the police and then killed, and body returned to the villagers. Today, a fact-finding team from AAP, led by Soni Sori tried to visit the village to investigate this.  But the team was stopped and harassed at 4 different camps on the way, finally they were stopped and held for almost hours at the Injeram Camp on various excuses, just 10 km short of the village.
Soni and others returned back to Sukma in the evening to meet the collector and SP. But no one was available at their office. ASP, Sukma Mr. Santosh Singh met the team and told them that they can’t be allowed inside without Security force personnel’s. The team then asked them to send some personnel’s with them, ASP said no one was available and so they can;t be allowed to visit the village.
Villagers on the other hand are willing to talk and are waiting with the body of the girl for the team or journalists to come and talk to them and see for themselves.
In protest, Soni and others have decided to camp/do a dharna at the collectorate itself until they are allowed to go in.
This is a request to all the journalists, civil society and other concerned people to:
1. To please call the  officials to insist that the team be allowed to go in to meet the villagers.
2. To visit the village themselves and investigate the incident asap.

Numbers of the officials: