Uruguay’s victory over Philip Morris: a win for tobacco control and public health

Much of our best content is available only to IP Watch subscribers. We are a non-profit independent news service, and subscribing to our service helps support our goals of bringing more transparency to global IP and innovation policies. To access all of our content, pleasesubscribe now.

The tobacco industry’s global efforts to use bilateral and multilateral agreements to challenge the spread of tobacco control measures such as trademark-minimising plain packages were dealt a significant blow last week when the World Bank dispute settlement body dismissed a case brought by Philip Morris against the government of Uruguay.

The decision is seen a landmark for those who view the company as using test cases to continually challenge and delay public health protection measures and discourage other countries, particularly those with fewer resources, from strengthening their health regulations. Additionally, the case reasserted that trademarks are subject to government regulations and also illustrated the role that international organisations and actors can play in support of national governments defending their health measures. 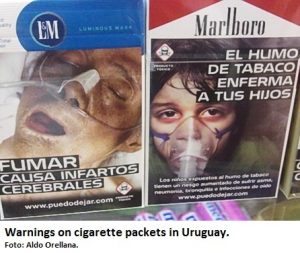 Philip Morris initiated legal proceedings through its Swiss subsidiary against Uruguay at the World Bank’s International Centre for Settlement of Investment Disputes (ICSID) early in 2010. Among many firsts, this was the first time a tobacco group challenged a state in front of an international court and the first investment arbitration concerning tobacco control.

ICSID aims to support voluntary conciliation and arbitration of international investment disputes upon consent of both the investor and state. Once such consent is given, it cannot be withdrawn unilaterally and it becomes a binding undertaking. Independent arbitrators and conciliators appointed to each case hear the evidence and determine the outcome of the dispute.

Philip Morris claimed that the health measures imposed by the Uruguayan Public Health Ministry infringed on its intellectual property rights and breached Uruguay’s obligation under the bilateral investment treaty (BIT) between itself and Switzerland.

The case and related documents can be found here.

Two specific measures were contested. The first was the Single Presentation Requirement introduced by the Uruguayan Public Health Ministry in 2008, where tobacco manufacturers could no longer sell multiple varieties of a brand. In having to pull 7 out of its 12 products, Philip Morris alleged that only being able to market one variety substantially affected its company value.

The second measure concerned the so-called “80/80 Regulation.” Under a presidential decree issued in 2009, the graphic health warnings on cigarette packages should cover 80 percent instead of 50 percent, of the packaging, leaving only 20 percent to the tobacco companies’ trademarks and other information.

Uruguay was the first to go beyond the 50 percent surface requirement, but since the proceedings began, 58 other countries have also increased the requirement for the size of graphics. Nepal even calling for 90 percent of a cigarette package to be covered. The claimants contended that this further deprived them of their IP rights, causing further loss to their investments.

In its defence, Uruguay countered that “both regulations were applied in a non-discriminatory manner to all tobacco companies, and they amounted to a reasonable, good faith exercise of Uruguay’s sovereign prerogatives.”

The case moved to examine whether Uruguay had failed to observe its commitments on the use of trademarks under the BIT and the scope of such commitments.

Upon submitting a registration application and being granted trademarks, Philip Morris argued that an investor should be able to hold and exercise the full range of rights available to trademark holders and that Uruguay would be committed observe these rights. Within these rights was notably the right to use its trademarks.

The tribunal found that “under Uruguayan law or international conventions to which Uruguay is a party the trademark holder does not enjoy an absolute right of use, free of regulation, but only an exclusive right to exclude third parties from the market so that only the trademark holder has the possibility to use the trademark in commerce, subject to the State’s regulatory power.”

This reflects and falls in line with the general concept that trademarks confer their holders only the right to prevent others from using their marks and are still subject to state regulations.

Furthermore, with regard to the scope of commitments, it was held that “a trademark is not a unique commitment agreed in order to encourage or permit a specific investment” and that Uruguay had no commitment nor obligation in relation to an investment under the BIT.

Ultimately, “a trademark gives rise to rights, but their extent, being subject to the applicable law, is liable to changes” subject to a state’s decided health measures. With no commitment to enable Philip Morris to use its trademark and with trademarks being subject to national laws and regulations, the tribunal found that Uruguay had not violated the BIT and dismissed the case.

Implications of the Decision

The case is highly significant given the polarity between actors and the debate on the use and application of domestic and international intellectual property laws.

Many hail this case as a significant victory in a series of tobacco companies fighting control measures, and others such as former New York Mayor Michael Bloomberg applauded Uruguay for standing up to the tobacco industry and showing others they can win.

The decision reinforces that states have a sovereign right to decide on their laws and regulations to protect their population.

Some critics, such as Laurent Huber, executive director for Action on Smoking and Health, contend that this was a public relations case for Philip Morris, aimed at discouraging other countries from imposing stronger public health regulations with the threat of a lengthy lawsuit by an opponent with deep resources. The annual revenue of Philip Morris in 2013 was reported at $80.2 billion, in contrast to Uruguay’s GDP of $55.7 billion.

Already in 2010, international lawyer and practitioner in investment treaty arbitration Todd Weiler stated in a legal opinion that:

“PMI’s BIT claim against Uruguay is emblematic of its long standing strategy to vehemently oppose the adoption of measures that might some day lead to plain paper of their products, or other measures that substantially interfere with the use and enjoyment of its crucial investment in its tobacco brands.” He added that “the claim is nothing more than the cynical attempt by a wealthy multinational corporation to make an example of a small country with limited resources to defend against a well-funded international legal action….”

Overall, given the definitive outcome of the present case in addition to cases where domestic, regional and international courts upheld measures to impose plain packaging and new tobacco regulations (see United Kingdom, European Union and Australia), other countries will perhaps no longer feel pressured and act on their own accord with regards to strengthening their public health measures.

Another significant aspect of the case is that the World Health Organization and the WHO Framework Convention on Tobacco Control (WHO FCTC) secretariat submitted an amicus brief during the proceedings which provided “public health on Uruguay’s tobacco packaging and labelling laws and detailed state practice in implementing similar measures.” Further details can be found in the WHO’s press release.

According to the FCTC, “The Tribunal accepted submission of the amicus brief on the basis that it provided an independent perspective on the matters in the dispute and contributed expertise from ‘qualified agencies’.”

This is not only affirmative that the FCTC provides legal backing to states who seek to provide protective health measures, but illustrates the success of international organisations in supporting national governments in their health efforts.

Lastly, in view of the place of arbitration some might question the existence of investor-state dispute settlement bodies such as the ICSID.

In Karen Hansen-Kuhn’s view as international program director at the US-based Institute for Agriculture and Trade Policy, these bodies empower companies to sue governments in private tribunals over measures that undermine their expected profits. In doing so, companies gain a chance for a “second bite at the apple,” which also “undoubtedly sends strong political signals to other local or national governments considering new programs.”

Hansen-Kuhn argued that rather than allowing investor-state dispute settlement bodies to decide, global governance rules should be given priority to lead the way on public health discussions.