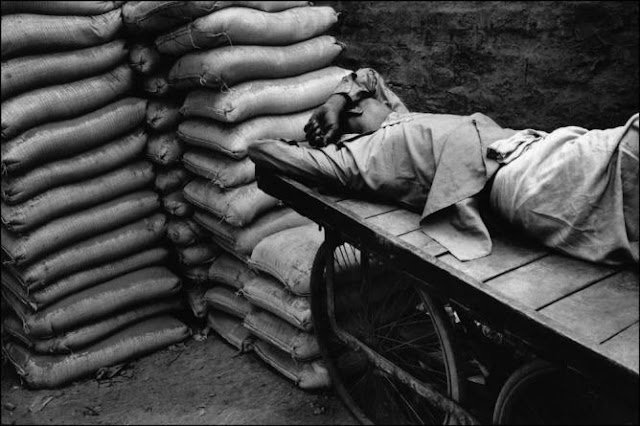 There is no question that we should distinguish between forced labour, trafficking and slavery. But, we should also include in the debate another concept, ‘bonded labour,’ as it describes a distinct and widespread form of forced labour in India that does not fully accord with the International Labour Organization’s (ILO) definition of forced labour. The sociopolitical reality in India and bonded labour’s intimate link with the Indian caste system demand that the term ‘bonded labour’ be retained in the discourse on forced labour and trafficking in persons. Addressing bonded labour enables two interconnected areas of exploitation and discrimination to be addressed, namely working towards emancipation of the minority Dalit community and of the Moolnivasi indigenous communities.
Bonded Labour
According to most recent World Bank figures, in 2009, 23.7% of Indians lived below the international poverty line of less than USD 1.25 per day.1 Most of those are Dalits and Moolnivasis, and they constitute an overwhelming majority of bonded labourers.2 In some regions, they make up 90% to 95% of such labourers.3 This sheds light on an important aspect of bonded labour in India: it is not just an issue of poverty, it is a complex social issue and a continuing element of the all-pervasive caste system, rooted in discrimination against minority and indigenous groups.
Historically, in the typical traditional caste system, Dalits performed all forms of menial labour for the so-called ‘higher caste’ families and for the village as a whole, without any wage. Remnants of these forms of caste-based services still exist in many villages throughout India. During the British rule of India, this ‘caste slave labour’ was replaced to a great extent by bonded labour passing through a system of contract labour known then in the British Empire as ‘indentured labour’.4 Community-owned land was privatised through various Land Settlement Acts in the late 18th century, and wage labour and cash payments increasingly became the norm. Dalit and Moolnivasi populations were moved en masse as indentured labourers from one region in India to another and also moved overseas to other British colonies to work in coffee or tea plantations,5 to work in various types of mines, and to lay railway lines. They were forced to sell their labour for wages that were not sufficient to cover even their basic needs, let alone those of their family members. Eventually, even in villages, the earlier ‘caste-slave labour’ characterised by ‘patron-client’ relationships was replaced by wage labour. The wage labourers had to resort to taking advances or loans, and, in lieu of that, they started mortgaging their and their family members’ labour to the creditor. The most indigent among the Dalits and Moolnivasis in villages today survive through bonded labour.
Bonded labour and debt bondage are not defined in international instruments. By contrast, the Bonded Labour System (Abolition) Act 1976 of India does provide definitions of bonded debt, bonded labour and bonded labourer, as well as a more comprehensive definition of the bonded labour system. According to the Act, the bonded labour system is a system of forced labour in which a debtor, either for a loan, advance or any other economic consideration (or hereditary, customary, social or caste obligation), agrees to render service for no wages or for only a nominal wage. The system also includes situations where the debtors are prevented from selling labour or the product of labour to anyone else or where their free movement is severely obstructed. The Indian Supreme Court has clarified that forced labour need not only involve physical or legal compulsion, it is also found in situations where a person agrees to work for nominal wages, i.e. wages below the statutory minimum wage or the prevalent wages, due to economic hardship. Thus the Supreme Court has given a definition of what constitutes ‘force’ that is even broader than that in the International Labour Organization (ILO) definition of forced labour.6 Involuntariness is an important constituent of forced labour in the ILO definition, but under the Indian Act, bonded labour results from an agreement between a debtor and her/his creditor, wherein the bonded labourer seems to ‘agree’ to the conditions of bonded labour. This agreement on the part of a bonded labourer, though indicating that he/she is freely entering into the agreement, does not mean it is not forced labour.

Bonded labour is a reality encountered by all those working with Dalits and Moolnivasis, as well as those with a focus on forced labour, slavery-like practices and trafficking in persons. But advocates, like myself, face stiff resistance from all sections of the government both to recognising the practice as a problem and to committing to its eradication. A deep culture of denial of bonded labour is the norm in all branches of governance, be it legislative, executive, police and judiciary, or levels of governance, from national level to gram panchayat (a cluster of villages). In spite of the strong provisions in the Indian Constitution and a powerful Act, bonded labour is largely dismissed as a phenomenon of the distant past, like slavery, and abolished by legislation. Yet ample evidence12testifies to its continuing existence. While the term ‘trafficking in persons’ has gained traction across India, the focus on trafficking arguably feeds this culture of denial as regards bonded labour, leading to a situation where the reality of bonded labour can be totally ignored under the pretext that the practice in villages does not constitute traffic in persons.
I advocate retaining the term bonded labour in the discourse on forced labour, slavery and trafficking in persons, until all forms of bonded labour are eradicated in India.
Kiran Kamal Prasad is the Coordinator of JEEVIKA—Bonded Labour Liberation Front in Karnataka, India. He has been working with Dalits since 1985 and took up research on bonded labour in 1988 in a taluk (sub-district) of Bangalore. He used the data from the research, which identified nearly 700 bonded labourers, to lobby at the state legislature in 1990 and simultaneously started conscientising and unionising bonded labourers in that taluk. JEEVIKA was launched in 1993 to extend the movement to the entire state. Before working against bonded labour, from 1983 Prasad worked with Siddis and Bantu groups from Africa in Karnataka, India, and was instrumental in achieving Indian Parlaiment recognition of the groups as a Scheduled Tribe in 2003.
Email: [email protected]

1 World Bank, ‘Poverty and Equity Country Dashboard: India’, retrieved 07 August 2015,http://povertydata.worldbank.org/poverty/country/IND
2 S Marla, Bonded Labour in India, National Survey on the Incidence of Bonded Labour, Biblia Impex Private Ltd., New Delhi, 1981, p. 17. ‘86.6% of the bonded labourers come from the underprivileged section of Harijans and Adivasis (scheduled castes: 61.5%, scheduled tribes: 25.1%).’ Harijans are scheduled castes, and Dalits are referred to in the article; Adivasis are scheduled tribes, and Moolnivasis are referred to in the article.
3 K K Prasad, Bonded Labour in Anekal Taluk, Bangalore Urban District, An analysis, Jeeta Vimukti Karnataka, Bangalore, 1991.
4 Indentured labour was a form of contract labour prevalent in the British Empire in the late 18th to the early 20thcentury, wherein labourers were compelled to render labour against the advances they received, failing which they were made to undergo stringent punishments.
5 J Sharma, ‘Introduction’ in D Ganguli (ed.), Slavery in the British Dominion, 1886, pp. 28-32; ‘From 1838 to 1920, indentured contracts took more than two million laborers from India, China, and Southeast Asia to British Colonial plantations across Assam, Natal, Ceylon, Malaysia, Fiji, Mauritius, Surinam, and the West Indies.’ A Schiffrin (ed.), Global Muckraking, 100 Years of Investigative Journalism from around the World, The New Press, New York, 2014, p. 28.
6 Forced labour means all work or service that is exacted from any person 1. Under the menace of any penalty and 2. For which the said person has not offered herself voluntarily. ILO, C029—Forced Labour Convention, 1930 (No. 29), Convention concerning Forced or Compulsory Labour, 28 June 1930.
7 Slavery means the status or condition of a person over whom any or all of the powers attaching to the right of ownership are exercised. United Nations, Slavery, Servitude, Forced Labour and Similar Institutions and Practices Convention of 1926, 9 March 1927.
8 Slavery-like practices are debt bondage, forced or servile marriage, sale or exploitation of children (including in armed conflict) and descent-based slavery. Office of the High Commissioner for Human Rights,Supplementary Convention on the Abolition of Slavery, the Slave Trade, and Institutions and Practices Similar to Slavery, 7 September 1956.
9 Trafficking in Persons has the following three main elements: 1. Act of: recruitment, transportation, transfer, harbouring or receipt of persons. 2. By means of: threat or force or other forms of coercion, abduction, fraud, deception, the abuse of power or a position of vulnerability or the giving or receiving of payments or benefits to achieve the consent of a person having control over another person. 3. With the intent of: exploiting that person through prostitution of others, sexual exploitation, forced labour or services, slavery or practices similar to slavery, servitude, and removal of organs. The consent of a victim of trafficking in persons to the intended exploitation set forth above shall be irrelevant where any of the means set forth above have been used. UN General Assembly, Protocol to Prevent, Suppress and Punish Trafficking in Persons, Especially Women and Children, Supplementing the United Nations Convention against Transnational Organized Crime, 15 November 2000.
10 In absence of statistical data, the percentages here are rough yet informed estimates from my experience of working on bonded labour in the agricultural sector since 1998. Bonded labourers are not trafficked by an agent to a distant place; very often it is the bonded labourers themselves, and, in cases of children, their guardians, who go in search of masters, very often in their own villages or at the furthest in neighbouring villages.
11 In most cases of bonded labour in villages, trafficking is not involved. The trafficking definition is more likely to apply (though still not necessarily) in a minority of cases where bonded labour involves migration.
12 M Yadav and K K Prasad, ‘Bonded Labour Thrives Even Today in Karnataka’ in M Yadav, A Comprehensive Study on the Status of Scheduled Castes in Karnataka, Centre for Study of Social Change and Development, Institute for Social and Economic Change, Bangalore, 2014, pp. 277–328; S Sethia, ‘Bonded Labourers’ in H Mander (ed.), India Exclusion Report 2013–14, Books for Change, Bangalore, 2014, pp. 203–219; Walk Free Foundation, ‘The Global Slavery Index 2014’, Walk Free Foundation, 2014; Walk Free Foundation, 2013; ILO, ‘ILO Global Estimate of Forced Labour: Results and Methodology; International Labour Office, 2012; R S Srivastava, Bonded Labour in India, Its Incidence and Pattern, ILO, 2005; in addition, there are plenty of recurring reports in Indian newspapers and magazines, both in English and the various local languages.
This work is  republished from Anti Trafficking Review under a Creative Commons Attribution 3.0 License.