Vasectomies: turning an ‘act of love’ into a global movement 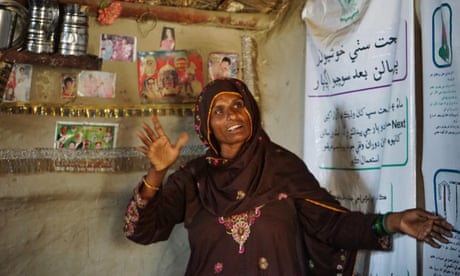 The ‘Avon ladies’ of Pakistan selling contraception door to door

“How do we celebrate the best in men when the news is full of stories about their frustration, humiliation, and destructiveness?” That was the question that film-maker Jonathan Stack was pondering back in 2011. The answer, he concluded, was to point out to men that there is a simple and pragmatic way they can personally make a difference to some of the most complex problems of our time – a vasectomy.

“I saw it as a creative challenge,” he says now. “How do we counter that narrative?” In vasectomies Stack saw an opportunity to transform an “act of love” into a global movement – a means “to engage men in the conversation”.

Expanding access to vasectomies in developing countries has now become Stack’s life mission. In 2012, he created World Vasectomy Day while working on a documentary about his journey through fatherhood and decision to have a vasectomy. “The plan was to have 100 doctors in 20 countries do 1,000 vasectomies in 24 hours,” he says. “And we came very close to that.”

Men need to share the burden of birth control

Studies indicate that reducing fertility can result in far-reaching benefits – from improvements to maternal and child health to poverty reduction and long-term environmental sustainability. In 2012, the Bill and Melinda Gates Foundation and the UK government’s Department for International Development co-hosted a summit on family planning and outlined an ambitious new goal: to make affordable contraception available to an additional 120 million women and girls in the world’s poorest countries by 2020.

Four years on, important gains have been made: more than half of the 69 countries have delivered on their commitments, and an additional 24.4 millionwomen and girls now have access to modern contraceptive methods. But some experts say progress has been slower than expected because efforts have overlooked a key population: men.

“We’re falling behind,” says Monica Kerrigan, former deputy director of family planning with the Gates Foundation and a senior adviser to FP2020, the global partnership formed after the summit to carry out its objectives. “I think a missing component is the need to engage more men to support their partners and spouses.” Among the many ways they can do that, she says, is by shouldering some of the burden of birth control, including, for those who no longer want to have children, voluntary sterilisation, or vasectomy.

Stack agrees. As it is, he says, men are largely left out. Most family planning programmes target women and girls, and with good reason: globally, the biggest barrier to reducing birth rates is gender inequality – population growth is fastest where female literacy is low, violence against women is common and reproductive rights are not protected.

Still, the reality remains that men tend to dominate decision making about family size and birth control. At the same time, they tend to be detached from or opposed to family planning, and the result is often that their partners discontinue using birth control or never start at all. In fact, of the unmarried women who say they don’t want to get pregnant within the next two years, close to a quarter don’t use contraception because someone close to them opposes it – one reason for the 74m million unintended pregnancies that occur annually.

“We’re now realising that while it’s important to focus on women and girls, we can’t continue with business as usual,” says Kerrigan. “We have to positively disrupt the status quo.” World Vasectomy Day, she says, is just that – an effort to secure men’s engagement, using modern innovations that can accelerate progress.

One of those innovations is the no-scalpel vasectomy. First performed in China in the 1970s, the technique made what was already a safe, simple procedure – a pair of small incisions to sever the duct that delivers sperm from the testicles (the vas deferens) – even more so. Using the no-scalpel approach, a provider need only locate the vas deferens under the skin and make a single needle puncture through which to cut it, minimising the risk of bleeding.

Men equate vasectomy with castration, or believe it will cause them to be impotent

“That modification really facilitated the spread of vasectomy across the globe,” says Carmela Cordero, a reproductive health expert with EngenderHealth. “Before, it was only the urologist who could perform a vasectomy. Now, we’re training nurses, midwives, clinical officers. You don’t need sophisticated equipment, you don’t need an operating room. It’s inexpensive, and it takes less than 15 minutes.”

And yet, for all its virtues, vasectomy is still an uncommon practice in the developing world and the least known modern method of contraception in poorer countries. In sub-Saharan Africa, where the unmet need for family planning is greatest, fewer than 100,000 men have had the operation. By comparison, female sterilisation, which is costlier , more time consuming, must be performed in a hospital and can result in serious complications, is among the most widely usedmethods of contraception worldwide.

One reason for that, says Ricky Lu, director of family planning and reproductive health at non-profit Jhpiego, is that vasectomy has long been mired in misconception. “Many men equate vasectomy with castration, or believe it will cause them to be impotent,” he says. Where accurate information is lacking, he says, demand for the procedure is very low, and “there are few trained providers offering the service” as a result.

Jhpiego is trying to change that through programmes like Tupange (“let’s plan” in Kiswahili) in Kenya, which aims to make modern contraceptive methods available to the urban poor and to educate men about the benefits of voluntary male sterilisation.

The country is one of a long list that will celebrate the fourth annual World Vasectomy Day on 18 November, 2016. Now a global movement, the event is supported by theInternational Planned Parenthood Federation, Marie Stopes International, FHI 360, and the ministries of health of India, Indonesia, and Kenya.

As before, the day will feature an 18-hour “vasectomy-thon” with medical professionals from around the world performing the procedure, as well as a training session for would-be providers in Kenya. “We’ll also have a wellness centre where men can get a general check-up, as well as counselling and testing for HIV and hypertension,” Stack says. “We think that part of being a responsible partner is taking care of one’s health.”

Kerrigan says vasectomy is part of catalysing men to support contraception. “If the majority of men supported their partners in using the contraceptive method that they want, we could go a long way toward preventing the 74m unintended pregnancies that happen every year,” she adds. “We need to change the way we think about men and boys in this space.”https://www.theguardian.com/global-development-professionals-network/2016/sep/22/family-planning-falling-behind-men-missing-piece-vasectomy?CMP=Share_iOSApp_Other

Two security personnel remanded in police custody for attack on environmental activist #Justice
Law on Manual Scavenging- Humanity Denied #Dalitrights
India - Aadhaar face recognition is the worst idea UIDAI has come up with
Sterilization in India: Women Must be Given Safe Choices