The Vishwa Hindu Parishad (VHP) and Bajrang Dal have urged the Karnataka police to not to permit Kiss of Love campaign in BJP stronghold Shivamogga on February 14. 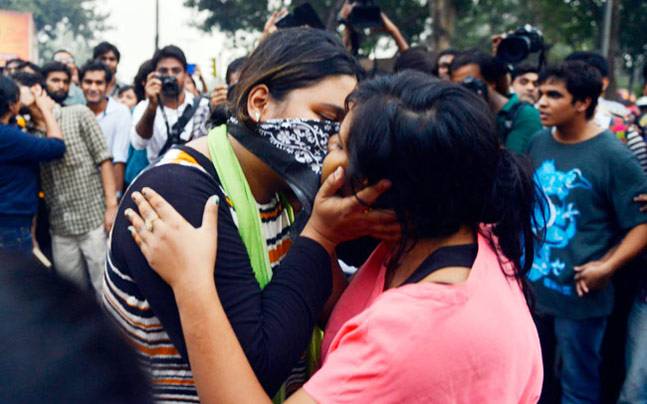 The Vishwa Hindu Parishad (VHP) and Bajrang Dal have urged the Karnataka police to not to permit Kiss of Love campaign in BJP stronghold Shivamogga on February 14.

A youths’ organisation is planning the campaign on the occasion of Valentine’s Day in the heart of Shivamogga city contending that they have every right to express love. The organisation has sought protection from the police and the district administration for the event. However, the district authorities have not yet responded to the organisation’s plea.

Meanwhile, VHP Shivamogga district president Ramesh Babu Jadhav and Bajrang Dal Shivamogga convener Malatesh submitted separate memorandums to the district authorities opposing the campaign on the grounds that it would lead to a law and order problem in the city.http://indiatoday.intoday.in/story/vhp-bajrang-dal-oppose-kiss-of-love-campaign-in-karnataka/1/583396.html

#India -'It is an insult to women's cricket to be treated this way' #Vaw #Gender
Mumbai - April17- 18 - Art Festival - on margianlised an displaced #freeentry #mustsee
Happy Children's Day ? Rajasthan- In land of labour reforms, an unspoken wart- child labor
Bihar's Heath Care institution, IGMIS, does NOT have Sexual Harassment Committee as per Law #Vaw