The brutal rape of an 8-year old in Mandsaur, Madhya Pradesh in June 2018 is being given a brazenly communal spin on social media. Thousands of users are sharing a message, according to which members of the Muslim community rallied on the streets of Mandsaur demanding that the perpetrator of the crime be released because the Quran sanctions rape of non-Muslim women. The message has spread like wildfire on Facebook and Twitter.

The message has been accompanied by a link to an article on a website www.indiaflare.com. The title of the article is ‘क़ुरान में दूसरे धर्म की लड़कियों से बलात्कार जायज़, इरफ़ान खान को रिहा करो’ (Rape of non-Muslim girls valid according to Quran, release Irfan Khan- translation) and is probably the source of this message which is circulating widely. In the article, there is a photograph which shows Muslim men marching on a street holding placards that say, ‘इरफ़ान को रिहा करो’ (Release Irfan). The article, published on July 1, has been shared over 16000 times till now.

The article is a compendium of falsehood. There are a number of claims and allegations which are outrightly untrue.

1. The picture is photoshopped

As can be seen, the text on the placard was tampered with. The original text says, ‘नहीं सहेंगे बेटी पर वार , बंद करो ये अत्याचार ‘ (Wont tolerate attacks on daughters, stop this brutality- translation). In the photoshopped image, this was deviously changed to ‘इरफ़ान को रिहा करो’ (Release Irfan). Not only the first placard, but also the text of the placard held by the person marching behind has been tampered with. ‘दरिंदे को फांसी दो ‘ (Hang the beast) has been changed to ‘रिहा करो ‘ (release him).

2. Muslims have not taken out rally against the accused

The article goes on to claim that no Muslim has descended the streets to ask for capital punishment for the accused, but have rallied in his favour, citing the Quran. It goes on to warn readers to not believe reports to the contrary which they may encounter on social media as they are untrue.

This claim is totally false. Firstpost has reported that Muslim groups in the region have strongly condemned the incident and demanded harsh penalty for the accused. Some groups have demanded death penalty for the alleged perpetrator and appealed to not allow his body to be lowered in any graveyard in Mandsaur or Neemuch.

Scindia has tweeted a photograph of him attending a rally demanding capital punishment for the Mandsaur rape accused. 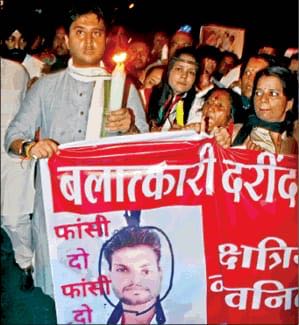 Alt News found that the website www.indiaflare.com was registered only last month, on June 22, 2018. Skimming through the website, one finds that it is full of dubious ‘news’ reports.

This article not only targets the Muslim community in the most reprehensible manner but seeks to exploit a heinous crime through the use of fake imagery and misinformation, drawing a false equivalence with the Kathua rape case wherein some groups had led a protest march in support of the accused. Alt News has observed that a number of dubious websites have propped up in recent times which claim to be news portals. These websites post articles with sensationalist headlines and blatantly disseminate misinformation which is often communal in nature. Readers are advised to be circumspect with regard to these portals.