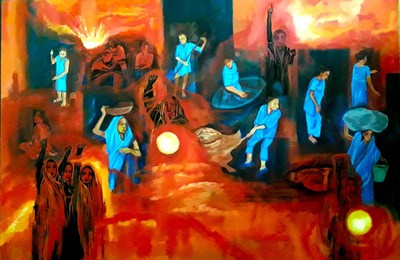 “My only intention was to talk about the constitutional rights of women,” said Dr Mithilesh Gautam, a 37-year-old Dalit guest lecturer who was dismissed by the Mahatma Gandhi Kashi Vidyapith (MGKVP), Varanasi, on 29 September, over a social media post in which he said that women should read the Hindu Code Bill and the Indian Constitution instead of fasting for nine days during Navratri.

Gautam, who hails from Uttar Pradesh’s Azamgarh, has also been banned from entering the university campus.

“For women, it is better to read the Constitution of India and the Hindu Code Bill than fasting for nine days during Navratra. Their lives will be free from fear and slavery. Jai Bheem,” Gautam had said in a Facebook post.

The university registrar, Sunita Pandey, in an order dated 29 September, said that Gautam’s post “against Hindu religion” was brought to the administration’s notice via a complaint by the students.
“Due to Dr Gautam’s act, there is widespread anger among students, which might impact the university’s environment and examination; hence, I have been directed to remove Dr Mithilesh Kumar Gautam, guest reader, political science department, with immediate effect, and he is also prohibited from entering the premises of the institute,” the order stated.

In a brief interview with The Quint, this is what Gautam said.

What Had Happened?
“There are people of a certain organisation who have previously complained against me, but they could not find any grounds for action. This time, however, they are claiming that my post hurts religious sentiments. But there is nothing in that post which should hurt religious sentiments,” Gautam told The Quint.

He further said, “They (students who complained against him) are also sharing another post, which talks about ‘How Durga Killed Mahishasur’. They claim that it was shared by me, but I have nothing to do with it. Even if I shared it, sharing someone else’s post with a reference should not be considered wrong.”

Speaking about his freedom of thought, expression, and right to personal liberty, Gautam said that only 8-10 members of the Akhil Bharatiya Vidyarthi Parishad (ABVP), the student wing of the Rashtriya Swayamsevak Sangh (RSS), raised objections against his post, prompting the authorities to take this action against him.

“I wrote this post on 28 September. Some of these students took screenshots of it and started posting it on their Facebook wall with abusive comments against me. Then, one of the student leaders, along with 8-10 of his organisation members, gathered on the university campus on 29 September. On the same day, around 150-200 BA and BSc students were also protesting against the evaluation errors in their results. He and his associates hijacked that protest. They went to my department when I was not there and started hurling abuses, threatened to kill me, and demanded my suspension,” Gautam said.

“However, I have not received any derogatory message or threat personally on my mobile phone, social media, or face to face,” he added.

Meanwhile, speaking to The Quint, Prof AK Tyagi, the vice chancellor of MGKVP, said, “There have been two-three complaints against him (Gautam) previously as well. I tried to explain to him myself that he should not get involved in such things. But this time, again, he shared an objectionable post during Navratri. This had a bad effect on the university’s environment. Therefore, for his own security, he was asked to stop taking classes.”

What Was the Intention Behind the Post?
“Women’s participation in different spheres of life is still very less. Either we don’t consider them of being capable of that, or they themselves do not want to participate due to a lack of awareness. I only want them to come forward. They will understand their various rights if they read the Constitution. I am not stopping anyone from fasting or following anything else. Everyone has their own beliefs about these things. But awareness about our rights should be considered the most important,” Gautam said.

He further adds that if all women are aware of their constitutional rights, then it will be a huge problem “for Manuwadis, as they always consider women as objects or second-class citizens. You must have seen that earlier, there were many evil practices in India that gradually ended. However, some of them still exist. For example, the dowry system.”

Gautam said he found out about the action taken against him through social media as he was not on campus at the time.

“I have sent a letter to the VC of the university demanding my reinstatement as a guest lecturer. I have been given two punishments. I am not just dismissed from my service but have also been banned from entering the campus, which is very unfortunate. If the VC doesn’t revoke this order, then it will have a bad impact on my career, as no one will give me a job because of this incident. This kind of punishment really hampers the image and is also likely to affect my future employment, hence my constitutional rights. Therefore, I demand justice from VC sir,” he added.

‘Maoist killed in encounter was a juvenile undertrial
Kerala Journalist Arrested For A Second Time Under Fabricated Case
Why was Kamra banned when I didn’t file any complaint, pilot asks IndiGo
Why Obama should stop pushing nuclear energy on India