“We called for help and they killed our son”: Out-of-control police overreach meets extreme secrecy

“We called for help and they killed our son”: Out-of-control police overreach meets extreme secrecy

Many watchdogs believe the police are killing more innocent Americans than ever. But here’s why they can’t be sure 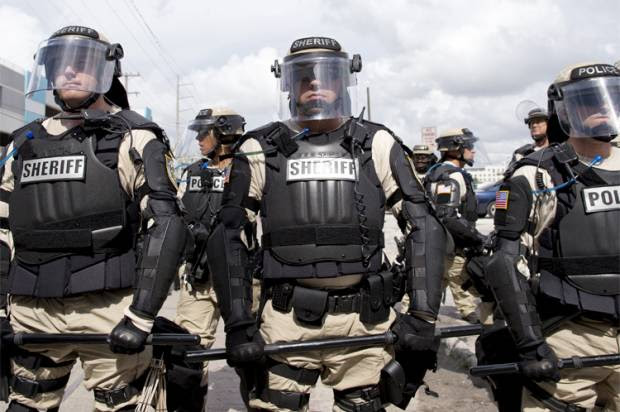 On January 4 in Boiling Spring Lakes, North Carolina, Mark Wilsey called 911 because his stepson Keith Vidal, 18, was threatening his mother with a small screwdriver. Vidal, a schizophrenic, had no history of violence, but in this case his family needed help. Two police officers used a taser to subdue Vidal, who weighed 90 pounds. The situation, says Wilsey, was under control. But a third officer, Bryon Vassey, showed up and quickly—within 70 seconds—shot him. “We called for help and they killed our son,” said Wilsey.

The killing recalls last month’s killing of Dixon Rodriguez, a mentally ill man whose mother had called 911 in Perth Amboy, New Jersey. In recent months, the police have injured or killed a notable number of people. Some were suspects; others posed an alleged threat to police. Some were armed; others weren’t. Only a few hours into 2014, Chicago police had shot four in two different incidents. On January 7th in Philadelphia, Darrin Manning, a 16-year old black boy, had emergency surgery for a ruptured testicle after a stop-and-frisk by two white officers: Thomas Purcell and a woman the department hasn’t identified.

If it seems to you that the police are becoming more violent, you may be right. In 2011, Los Angeles County police shot to death 54 people, some 70 percent more than in 2010. Between 2008 and 2013, the number of people shot by Massachusetts police increased every year. In 2012, police in New York City shot and killed 16 people, nine more the previous year and the most in 12 years. In 2012, Philadelphia police shot 52 people—the highest number in 10 years.

But whether these statistics reflect a national trend is, at this point, an unanswerable question.

“Excessive force by police is one of the big problems,” says Brigitt Keller, executive director of the National Police Accountability Project, who cites as causes the militarization of the police, persistent impunity, and a mythology that exaggerates the dangers police face and deters public officials from challenging them. “I believe the problem is getting worse,” Keller says, “but it’s hard to say for sure without comprehensive information.”

A credible national database on use of force by police is a longtime goal of criminologists and reformers. A 1996 Bureau of Justice reportnotes that, “For decades, criminal justice experts have been calling for increased collection of data on police use of force.”

“We don’t have a mandate to do that,” William Carr, a FBI spokesperson told the Los Vegas Review Journal. “It would take a request from Congress to collect that data.” Carr’s claim is false: the 1994 Violent Crime Control and Law Enforcement Act instructs the Attorney General to “acquire data about the use of excessive force by law enforcement officers” and to “publish and annual summary of the data acquired.” Yet 20 years later the data dearth persists.

Many, if not all, police accountability activists believe the police are wounding and killing more people than they were five or ten or twenty years ago, and that a higher percentage of the incidents are unjustified. The trend, they say, is all the more alarming because it has accompanied an overall decline in violent crime.

But in their effort to place the issue on the national agenda, they lack the capacity to make definitive statements. They have to rely on anecdotal evidence and words like “seems” and “suggests.” While transparency shouldn’t be mistaken for progress, it can be an important means to it. Consider how prison reform advocates have used incarceration data in their increasingly successful push for change.

And the lack of information is an excuse that police chiefs and public officials can hide behind to avoid the problem. Human Rights Watch’s1998 analysis is no less relevant today:

[T]he lack of national data has served to perpetuate a situation in which local and national officials can claim that there is neither a continuing nor a nationwide problem… Moreover, the lack of information supports the federal position that the problem is “local,” because the national government has no useful knowledge about it. And knowledge about the problem on a national scale is, of course, essential to the formulation of policy.

Information on police violence exists. Every time a cop fires a gun or otherwise uses force, details about the incident go into a case file. What’s missing is an effort to consolidate the information, much less analyze it. Keller attributes the lack of will partly to the identity of the victims, who tend to lack political power. “People who are white and middle class, who are not mentally ill or homeless, don’t see this is a problem that affects them,” she says.

There’s no question that a disproportionate number of those shot by the police are racial minorities and/or people with mental illnesses. In 2012, for example, Chicago police shot 57 people; 50 were black, and 2 were white. In 2011, the Portland Press Herald reported that 42 percent of the people shot by the Maine police since 1990 were mentally ill.

Yet recent victims of police violence include people who don’t fit the profile. Like Karl Anders Peltomaa, a 50-year-old white New York City resident whose chin needed stiches after his wife had called 9-11 because he was having a bad reaction to medication. And Kang Wong, an 84-year-old man bloodied by New York City police officers after he’d jaywalked.

But data about the victims of police violence, like all data about police violence, is elusive. While some departments are relatively transparent—the Las Vegas police department actually posts on the internet names of officers who fire weapons—others disclose no information on police violence, and federal collection efforts, such as they are, offer only snapshots. The FBI, through its Uniform Crime Reporting Program, captures data about killings by police, but this has a fatal flaw in that it relies on the voluntary participation of police departments. The Bureau of Justice survey asks about use of force in its Police Public Contact Survey, but this is done only every three years and, for obvious reasons, weeds out those killed or seriously injured by the police.

“All the federal government would have to do is say [to police departments], provide this data or you won’t receive funding,” says criminologist David Klinger, a former police officer. But the administration, like previous ones, isn’t inclined to do so, and while a bipartisan group in Congress seeks information about people killed by the U.S. military, there’s no comparable effort to uncover information about people killed by the U.S. police.

Klinger isn’t waiting for the federal government to act. Last year, the Los Angeles Police Department hired him to oversee a study of shootings by the police going back to 1998. The study is capturing a range of information, including whether the target of the shooting had a weapon and whether the police department deemed it justified.

“I can’t think of a more important priority in a republic than knowing the facts about when agents of the state put bullets in people,” Klinger says.

The study is the brainchild of Assistant Chief Sandy Jo MacArthur, who has 15 people in the department working part-time to help gather and input data. “We needed information deep enough to allow us to recognize meaningful trends and connections,” MacArthur says. “The purpose is to draw evidence-based lessons that we can put into training, so that we can prevent officer-involved shootings.”

The study, projected to last two years, will produce a data base accessible to the public, although names of the police officers will be excised. The department will input information as it comes in. “I can’t find anything like it anywhere,” says MacArthur, who reached out to Klinger in part because of his research on shootings by police in St. Louis and in part because she’d known him thirty years ago when he was an officer in South Central Los Angeles.

Klinger is a reform-minded ex-cop but an ex-cop nonetheless. He believes shootings by the police are rare, and that his data may reveal restraint on their part. In any case, he hopes the political sensitivity of this data won’t deter police departments from becoming more transparent. “Let’s get the data, then we can have the arguments,” he says.

MacArthur also has ambitious goals for the program, which she sees as model for other departments and the seed of a national database. “This is extremely important for the future of law enforcement,” she says.

A serious weakness of the LAPD study is that it’s not collecting demographic information on people shot by the police. Because of the disproportionate impact of police violence on people and communities of color, information on the race of victims is essential—and often closely guarded. In 2009, a State Supreme Court judge ordered the New York police department to reveal the race of people shot by the police. The NYCLU had sued because the NYPD had stopped disclosing this information after four white officers killed Amadou Diallo—the infamous 41 shots.

The lack of information on police violence is a matter of not just transparency and public safety but also civil rights. We need more studies, more legal action, and, above all, more pressure from the public.

Right Wing Extremists Kill Innocent Muslim Technie During Pune Riots
India - How the Farmer Dies
Mali - To Curb FGM , a project that focuses on the Cutters #Vaw
#India -Do you know incentive and target based health services can be coercive ? #Vaw