We were told non-violence is cowardly: Bhanwar Meghwanshi, a Dalit activist who quit the RSS 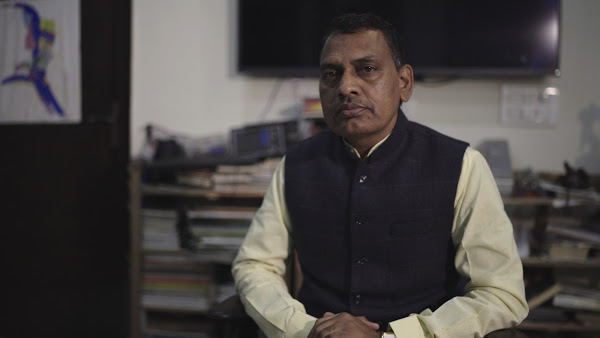 “Violence has always occupied a high place within the Sangh family, to the extent that in all Brahmin scriptures, it says that Vedic violence is not violence,” Bhanwar Meghwanshi, a Dalit activist about what he learnt in his years at the RSS. COURTESY ROUGH CUT PRODUCTIONS

In late 1980s, Bhanwar Meghwanshi, a 13-year-old from the Dalit community, started attending the Rashtriya Swayamsewak Sangh’s shakhas in Rajasthan, without knowing much about the organisation. Over the course of around four years, Meghwanshi grew to harbour a visceral hatred for Muslims and began to take immense pride in his Hindu identity. He dedicated himself to the cause of the RSS’s Hindu Rashtra, even receiving military training by the organisation. But after facing discrimination within the RSS, he realised that its vision is different for caste Hindus and Dalits.

Meghwanshi is now a journalist and an activist. His book Main Ek Karsevak Tha—I Was a Karsevak—was first published in Hindi in 2019 and its English translation, I Could Not Be Hindu: The Story of a Dalit in the RSS, was published by Navayana in January this year. That month, Sushil Kumar, an independent journalist, spoke to Meghwanshi about the RSS’s process of indoctrinating its cadre, its glorification of violence and its vision for a Hindu Rashtra.

Sushil Kumar: In which period were you in the RSS?Bhanwar Meghwanshi: I was active from 1987 to 1991. I participated in the first “karaseva” of 1990. I had left home to dismantle the Babri Masjid [in Uttar Pradesh’s Ayodhya], but did not reach, as the [Samajwadi Party chief] Mulayam Singh’s government was in power. At that time, we used to call him “Mulla-yam” Singh, meaning “maulana Mulayam.” His government arrested me, near the Tundla station, and kept me in the Agra jail for some ten days. By then, whatever karaseva had to take place had taken place. Then I returned home.

SK: Were there any women at the shakha?BM: At the shakha, all were men. We talked only about purusharth, male dominance. It is evident that there was no place for women. Seen one way, the meaning of purusharthais masculinity, patriarchy.

SK: What did you learn during your time as a swayamsevak?BM: I got to learn many things. First thing, I evidently became a reactionary. The second thing I learnt was to imagine everyone who was not from my village and panchayat as an enemy, and fight them, defeat them and hate them.

SK: How were you taught hatred?BM: In my panchayat, there were no Muslims, to the extent that even the sound of azan never reached my home. In spite of this, my mind had been filled with hatred towards Muslims. It was not filled in a straightforward manner, by saying that “one should be averse to Muslims,” but by saying: “We are Aryan, this is our country, we are the best and our blood is the best. Muslims are outsiders, who invaded us, looted our country, destroyed our culture, broke down temples to build mosques and ruined universities such as Nalanda. Whatever bad situation came to this country, whether it be of caste, of untouchability or purdah—these are all given by these people.”

These things were slowly hammered into my brain. Whenever I saw a Muslim then, I used to feel that they are the root of all evil—they broke down the Somnath temple, they ruined the Ram Janmabhoomi temple. This happens so naturally, and with such ease, that you would not feel when your brain has been filled with these things.

SK: In what form does the Sangh give military training?BM: Every swayamsevak has to do this in his first, second and third year. In the third year, they get the Officer’s Training Camp, or OTC. In this, they are trained in using a knife, spear, lathi and gun. I myself learnt how to make sutli and petrol bombs—this is necessary since you are in a religious war and you can’t do without it.

SK: What is the RSS’s organisational set up?
BM: The shakha is their primary factory. After leaving those, the volunteers go to different branches of the RSS based on its need. Those who are students will go to the Akhil Bharatiya Vidyarthi Parishad, the RSS’s student wing. If they have violent tendencies, they will go to Bajrang Dal or Durga Vahini. If they are religious then they will go to Bharat Vikas Parishad or Satsang Mandal.

It is told very clearly that non-violence is cowardly and it is due to this cowardliness that we stayed enslaved for thousands of years. So, they teach satey satayam samacharet, which means tit for tat. Now, many people express surprise that these people came to the Jawaharlal Nehru University, and other places, carrying sticks and rods, or wearing masks. I feel that this is not something to be surprised about. Violence has always occupied a high place within the Sangh family, to the extent that in all Brahmin scriptures, it says that Vedic violence is not violence. We were even taught that there are many virtues in the lathi, always keep it with yourself. I have come out of that. It is possible people feel, “what is this entering a campus, a temple of wisdom, with lathis.” But we were, in fact, taught that the lathi should be kept handy, to respond in the language of the lathi.

In my book, I have a statement of the time and incidents in 1993, when I was fighting against the ABVP and made a new organisation called Vidyarthi Adhikaar Rakshak Sangh [the Society for Protection of Student Rights]. The society’s president was surrounded and assaulted, just like this, and they left him to die after inserting a screwdriver in his head. So violence is not a new idea for them; there is much respect for violence there.

So this organisation system is actually entirely based on the lathi. What you are seeing today is because now their videos are coming out in front of people.

SK: Why did you become a rebel?BM: There was no reason for my being in the Sangh—I did not join the RSS at the age of 13 for any particular reason. At that age, there is a curiosity to play. Kids used to go to play there, so I also played, the school’s teachers used to take me to play. Five–six months later we found that our playing, talking, singing, hoisting the saffron flag is for an organisation called the Rashtriya Swayamsevak Sangh and we are its swayamsevaks—volunteers. I was a swayamsevak between the ages of 13 and 18.

There’s a story behind why I quit. For instance, my geography teacher used to set up the shakha too. In the geography period, he used to say that the sun is a ball of fire, and in the evening, in the shakha, he would make us do the surya namaskarbecause, he would reason, Hanumanji was so brave that he has swallowed the sun in his mouth. So I asked Guruji, “Is the sun a ball of fire or a god, which one is it?”

Then, I wanted to be a pracharak—fulltime worker. I was stopped by saying that “We need a pracharak, not a vicharak [thinker].” “We need people to transfer whatever [direction] comes from Nagpur as it is.” I was told, “Brother, instead of being a pracharak, be a vistarak [expander]—go to the villages of Hindustan. When you become a pracharak, people will ask your caste and find out that you are a Dalit, from a deprived community.” Though, usually, the word Dalit is not used in the shakha. “Then, someone might behave in a manner that you will not find right, and then you can retaliate. As much as you can benefit the organisation by doing positive work, you can bring harm by doing negative work.” My image had become that of a person who keeps asking too many questions.

On 12 March 1991, in Bhilwara, a protest rally for Ayodhya started, [asking the government of the day] to either hand over the temple or resign. That day, the rally and the afternoon namaaz were to take place at the same time. We had to pass through a Muslim-majority area, [Gulmandi]. Though a BJP government was in power in the state, the police blocked us and asked us to change our route or modify it a bit. We told the police, “Is Gulmandi in Pakistan that we should not pass through it? We will take that route only.” During this, someone from the back started pelting stones. Two–three stones hit the police. The police first fired in the air, but then it lost control of the situation—it then fired at the people. Two were killed in the firing, who happened to be Hindus, but had nothing to do with the rally. One of them came outside after hearing the sound of firing and caught the bullet. The other person had come to the town to buy things and fell prey to the police’s bullets.

In the name of Rama, the Sangh gave both of them the status of martyrs. They organised an asthi-kalash [funerary-urn] procession. When the procession reached my house, food was cooked for all.

My family, and [particularly] my father, did not approve of [the Sangh’s] ideology. They did not like me going to the Sangh. My father used to say that these people are not okay. I used to think that my father himself is not okay, because he was a Congress supporter and the Congress is, after all, against Hindus, so why would  he want me to attend the Sangh’s shakhas or programmes?

They said, “We will still eat the food you have made, it will be a bit difficult for the priests-sages who had come along to have that food. So, what you do is, pack the food and we will eat it when we get to the next village.” But rather than eating it at the next village, they had separate food cooked at a Brahmin’s home and threw away the food from my home along the way. I found out about this the next day. After that, I went to them and said, “First thing, you did not eat at our home; you packed the food but threw it away rather than eating it. I was ready to give my life for you at Ayodhya; I am your district chief. I want to build a Hindu Rashtratogether with you. What is my place in it?”

Then an argument ensued. They said that this was a very small thing, which I was turning into a big thing. “The people who were sitting in the car had food in their hands, when the car turned the food fell from their hands. We cannot eat food that has fallen,” [they said]. But the truth was that the food had been thrown at one side of the road; if it had fallen then it would be in the middle of the road. This argument went on for months and, in a rebellious manner, I asked the question, “What is the place of the Dalit in your Hindu Rashtra?”

SK: Now, what do you think the Hindu Rashtra is for the Sangh?BM: In the eyes of the Sangh, the Hindu Rashtra is a Brahmin nation with the varna system, the four vedasand the Manusmriti. The Sangh wants to run the nation on this very base. I feel that in the Sangh’s Hindu Rashtra, shudras or untouchables will be slaves, and Muslims, heretics or foreigners, will be given a second-class status.