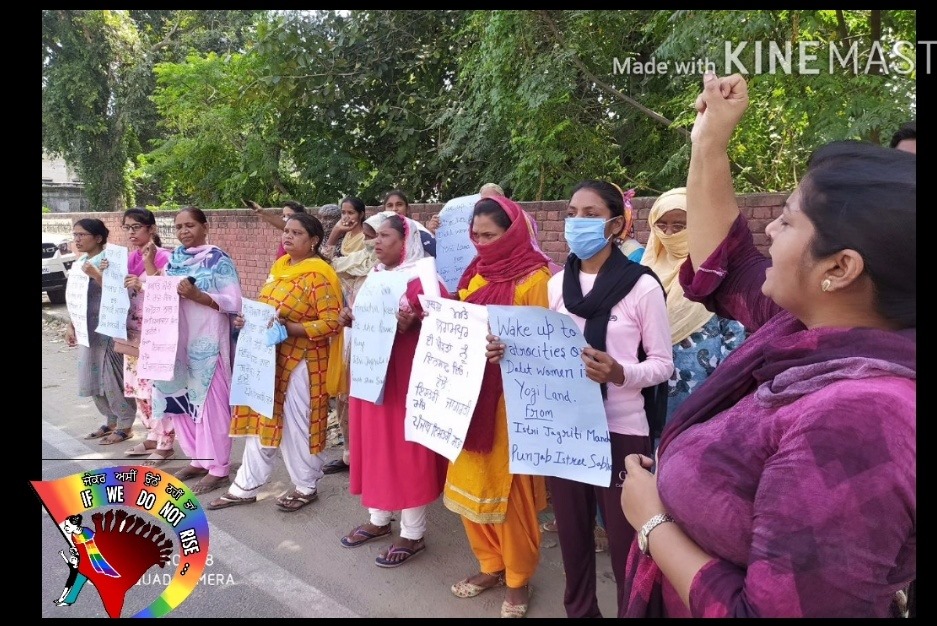 The If We Do Not Rise campaign comprising of more than 600 organizations and networks, rises in protest and strongly condemns the gang rape of a 19-year-old Dalit girl, by 4 upper caste men, who have now been identified and taken into custody. Not only did they rape her but they mutilated her body, cut her tongue and attempted to murder her on the 14 of September 2020.  She died in hospital on the 30th.  The hurried cremation of the body in the early morning hours, by the police, against the pleas of the family of the girl and without their presence, is a disgraceful abuse of power.

This is not the first time that Dalit women have been the target of sexual brutality by upper caste men in power.If We Do Not Rise campaign will continue to rise against all gross acts of violation of the fundamental rights of every citizen.  This is another SHAMEFUL DAY in the history of the nation.

This young Dalit woman’s rape does not stand in isolation, the state of UP has a dubious record of the rape and brutal murders of Dalit and Muslim women. Who says “India worships its women”?  The increasing brutal atrocities against women, especially against the most marginalised of women, continue with unrelenting frequency, with no justice in sight.If we do not rise campaign draws attention to this blight in a fact sheet on violence against women.  It speaks of the need for “a more comprehensive frame” to recognise that every incident of rape and violence “is a critical manifestation of social crisis and conflict… amplified by the intersections of caste, class, religion, disability, sexual orientation and location.”  The Campaign called for the strengthening of a comprehensive eco-redressal system which holds together all institutional services of the state – the police, medical services, the administration and legal systems.We condemn the rape and attempt to murder of the young Dalit woman and demand accountability and justice!·

We condemn the nexus between the police, the hospital medical fraternity, the government administration and politicians and their reprehensible treatment of this young woman and demand a fair and fast trial. As this is a compounded custodial crime, we demand that the arrested accused, and all involved, be treated as criminals and tried swiftly, as per the law of the land.·

The gendered/casteist repression of the Dalit community in India, keeping them in constant fear and denying them their right to life, liberty and equality as a fundamental right enshrined in the constitution, fills us with rage. In an interview of the victims’ brother, he has admitted to the threat and the lack of safety of the family. They are living in constant fear.

We demand that the state authorities ensure the safety of the victim’s family and stop all harassment.  ·

The concerned policemen must be tagged as defenders of rapists and taken into custody and relieved/suspended of service forthwith.

The hurried, secretive cremation by the police, ignoring the legitimate rights of the family over the body; and her right to the last rites due to her; is an offensive violation of laws and of human decency by the police. This   amounts to erasing evidence which is a grave offence.·

The statement by the IG of police in defence of the police actions is deeply objectionable.·

This is not the first gang rape of a Dalit woman in India.   We demand swift action and the most severe form of punishment – rigorous life imprisonment without parole, will deter future abuse of power against Dalit women.·

We condemn police violence against peaceful protestors against this incident, in Delhi and other parts of the country.

We will continue to rise….This statement of protest is issued on 1 October 2020, by the #ifwedonotrise campaign, which was launched on 5 September 2020 with a day of resistance which brought together more than 600 women’s groups; LGBTQIA communities; human rights organisations; trade unions and farmers organisations. We come together to safeguard the Indian Constitution and its values under the theme Hum agar uthhe nahin toh (If We Do Not Rise). The Campaign unites us, as the people of India, against the targeted attacks on our Constitutional rights and freedoms. We rise for the values of secularism, democracy, socialism, federalism and to ensure constitutional morality in our country.

We are giving a call on behalf of the campaign to Rise on October 4, 2020 to protest against the gruesome murder.

A. Organise protests in your areas

Pakistan -Peasants Rise Up : The oppression of small milk farmers
Fair Price Medicine Shops in West Bengal #Healthcare #Mustshare
EXPOSED - Rival armies get juicy lollipop on covert operations
'How Can Modi Be Forgiven?' India's COVID-19 Crisis May Be Turning the Middle Class Against the Prim...