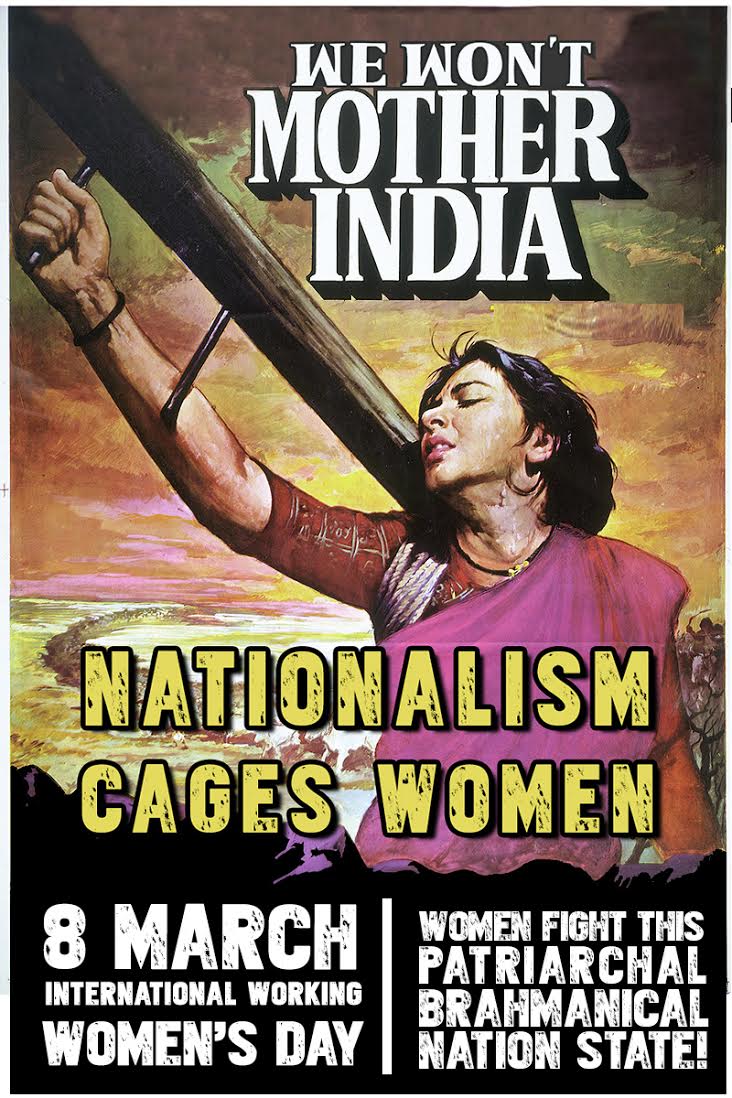 NO NATION FOR WOMEN: A Statement by Pinjra Tod

An Adivasi school-teacher and human rights activist, Soni Sori was brutally attacked by a group of men on feb 20th , her face blacked with grease. Soni now lies in a hospital in Delhi, her face mutilated and swollen, unable to open her eyes, but amazingly relentless and fearless about continuing her struggle against the atrocities perpetrated by the Indian state and mullti-national corporations against her people, the Adivasis of Bastar and Chattisgarh and their lands, rivers, forests and songs. In 2011, Soni had been arrested on charges of being a ‘Maoist’ by the Chattisgarh police and labelled an ‘anti-national’ under a host of fabricated cases. While in custody, Soni was subjected to brutal torture and assault. In a powerful letter addressed to the nation from jail, she had enquired in anger and desperation, “…by giving me current, by stripping me naked, or by brutally assaulting me – inserting stones in my rectum – will the problem of Naxalism end? Why so many atrocities on women? I want to know from all countrymen” The officer who led the torture on her, Ankit Garg, was awarded the Police Medal for Gallantry award.in 2012 for his ‘valour’, ‘courage’ and ‘self-sacrifice’ in service of the ‘nation’, in service of ‘Bharat mata’.

Soni Sori’s case is not an ‘exception’ or an ‘aberration’. Kawasi Hidme, an Adivasi from Bastar, once again charged as a ‘Naxal’, was repeatedly tortured and abused in custody, sent from one jail to another, after the policemen in a station had ‘satisfied’ themselves ‘enough’. This continued for seven years, as the ‘valiant’ actions of the protectors of the ‘nation’ led to Kawasi’s body ejecting her uterus one day. Bleeding profusely in unbearable pain, she pushed it back the first time and attempted to cut it off with a blade borrowed from another inmate the next time. Kawasi’s story came to light when Soni met her during her own time in jail. Hundreds of Sonis and Hidmes languish in prisons across the country. The women of Konan Poshpora, who were raped with impunity by soldiers of the Fourth Raj Rifles, the most senior rifle regiment of the Indian Army, more than 25 years back still await justice from the courts of law. The powerful protest of the Manipuri women who stripped naked defying the indefinite curfew imposed in Imphal, screaming “Indian Army rape us, kill us, take our flesh” after the rape and heinous murder of Thangjam Manorama, continues to disrupt our national pride from the ‘margins’ of this nation. The thousands of women who were raped during Partition, scream from the past, about the violence on women’s bodies that constitutes the very moment of inception of India as an ‘independent’ nation. This violence has been enacted over and over again in numerous moments across the history of this post-colonial nation, be it Emergency, the 1984 riots, the Godhra killings, the Gujarat riots, Operation Green Hunt, Kandhamal and Muzzafarnagar riots.

In a context of frenzy where everyone, from the right to the left, joins a race to assert who is the ‘true nationalist’ of them all, Soni’s blackened face, Manorama’s bullet-ridden dead body, Kawasi’s ejected uterus, begs us to ask the question: can the nation, any nation really ever belong to women? What is this nation built and held together (intergated?) by the rape and torture of women? Does the control, surveillance and violence on women’s lives, bodies and desires underlie the very core of what comes to constitute nationalism and the nation? Are masculine and patriarchal notions inherent to the imagination and construction of the nation? We have heard a lot about the contradiction that plays out when the sanghi brigade relentless threaten ‘mothers’ and ‘sisters’ with sexual abuse alongside exhaltations to ‘Bharat Mata‘. However, a more crucial question that we need ask is: Why is India a mother, why is Bharat a Mata, why? Why this engendering of the nation? Does the imagery of the nation entrap women into pinjras where we are reduced to biological reproducers of its members (‘sons’); limited to ‘mothers’/’wives’/’sisters’ in need of protection; contained into cultural signifiers who are the markers and reproducers of cultural boundaries/differences; idolised into figures whose bravery is realised through self-sacrifice/erasure? In this gendered construction of the nation, the lives and experiences of Dalit, Adivasi and working class women are invisibalised, frowned upon and even, criminalised. As we critique the nationalist project of Hindutva, we need to interrogate if there can really be a truly inclusive nationalism or if the nation functions on creating an excluded ‘other’ vs-a-vis whom difference is established?

The violence of the nation on women does not lie only in so-called ‘exceptional’ incidents, it is enacted in the ‘everyday‘, in the ‘mundane’, most often in our most initimate spaces and relations, in very insidious ways, beginning from our families and continuing to universities, workplaces and the society. The burden of the nation is a daily reality for every woman, manifesting in diverse forms inthe numerous regulations and restrictions that bind and cage her, in the policing of her autonomy and freedom that she has to negotiate and resist, and even internalise, everyday. How many times have our families told us that we have been corrupted by ‘Western’ ideals when we have argued with them for our most basic rights, be it the right to venture out at night or the right to study/work as a woman or the right to love the one we desire (the list is endless)? When the Justice Verma Committee set up after the Jyoti Singh rape case had recommended criminalising marital rape, a parliamentary standing committee, headed by Venkaiah Naidu, dismissed the recommendation, claiming that if marital rape is brought under law, the very edifice of the great Indian family system will come crumbling down. Basically what this asserts is that marital rape is a necessity for the ‘Indian’ family and the institution of marriage to survive. We have all heard of the horror tales of shaming and humiliation from women who have approached the courts seeking justice against sexual violence, as they were tried and interrogated for not adhering to the ideal of what marks the ‘good’ Indian woman.

Haryana CM’s ex-OSD, Jwahar Yadav statement, “For the girls who are protesting in JNU, I only have one thing to say that prostitutes who sell their body are better than them because they atleast don’t sell their country”, leads us directly into the patriarchy and brahminism that lie at the very heart of nationalism, trapping us into binaries of the ‘good’ vs the ‘bad’ woman, of the ‘anti-national/Maoist’ vs nationalist woman, the respectable woman vs the women on the streets, the good student vs the ‘ungrateful daughter’. A woman who is a sex-worker whose labour disrupts the premises of Brahminical morality and family ‘values’, is to be shamed. An autonomous woman who thinks, who questions, who resists, who fights is a grave ‘national threat’ to this nation, especially so if you are an Adivasi or a Dalit or a Muslim or a working class woman who is speaking aloud. Such women defy the masculine and patriarchal script of nationalism produced by upper-caste men (dating back to the early nineteenth century!), that has been premised on silencing of women’s voices and experiences and entraping them in a swirl of pinjras of domesticity and alienation.

Your borders and boundaries will not stop the international solidarity and collectivisation of women, our imaginations dance wild like stardust, like the magic spells of witches.