Were vaccines held back for ‘record’ vaccination on PM’s birthday?

Half of India (40%) are not yet eligible for vaccines. Many are paying for vaccines. Less than 30% have received the first dose. Less than 15% the second. But ‘record vaccination’ on PM’s birthday is cause for celebration?

A mass vaccination camp in Bhopal, Madhya Pradesh, on Sep 17 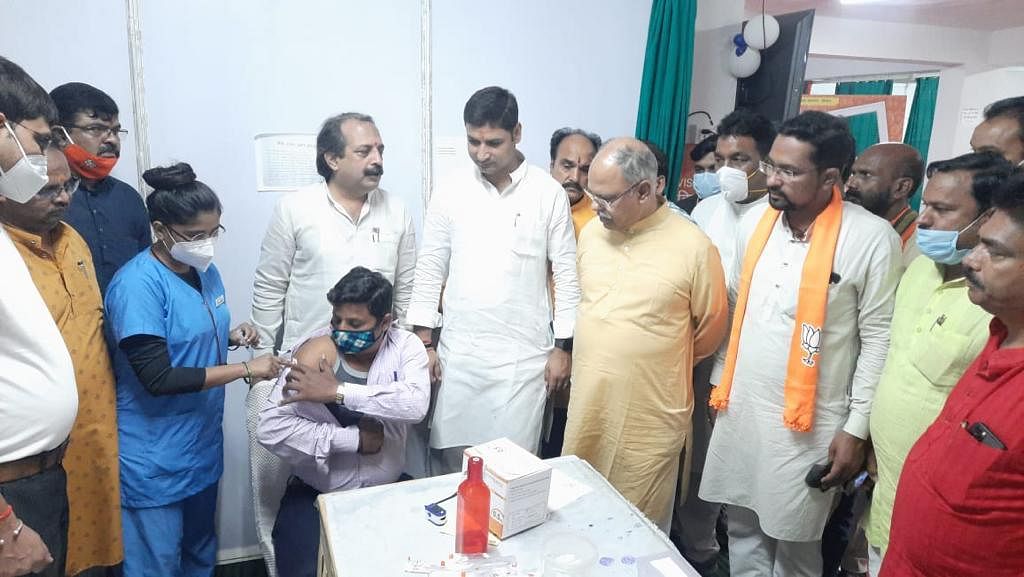 What Narendra Modi wants is to be the first prime minister of India. You could argue that he’s a few years late for that. You might put forward some logic: that he was not born when India gained Independence in 1947. You could do any of those things. But as ever, you’d have missed both the chai and the biskoot of Modi’s dream project.

Logic, reason, history: all these are incidental to the reality that Modi wants his adoring public to believe. Although if you don’t know this by now, please do introduce me to the magic rock you’ve spent the last decade living under. It must be quite a place!

The vaccination tamasha that took place on Friday was one more milestone in the Modi mythology machine. One more event rife with melodrama only so that Modi could prove that his fantasy version of India is the greatest ever and India is the top of the world at everything.

Nothing wrong with national pride. What is dangerous is this propensity for full-scale national lies. India is not the world’s top vaccinator. So far, less than 15 % of Indians have been fully vaccinated against Covid19 and less than 30 % of Indians have received one dose.

And with mounting evidence that vaccines appear to have been held back so that Modi and his fan club could mount a vaccination extravaganza on his birthday, confidence must be really high that all Indians can be fooled all of the time.

Lest we forget – and I suspect we have already – the second wave of Covid19 that hit India in April, May and June this year was catastrophic. We have already pushed the miseries of migrant workers walking the streets in the summer of 2020 to the back of our minds. Soon we will forget the desperation of families of the Covid-affected, the massive search for oxygen, the pleas for medicines that did not work but someone had promised might just, the dead bodies piling up, the pain, the suffering.

With under 30 % of the people of India vaccinated, the enormous celebration of numbers in the world’s second-most populous nation just to pump up some politician’s image is deplorable. It underlines every feudal law that democracy stands against.

It’s no point carping on about “dynasty” and its dire shortcomings when all you want is to replace it with a personality cult built up around India’s most inefficient and frankly positive-achievement-less prime ministers. Because if you want to get into vaccination-talk, some nations have already started arrangement for booster shots. We’ve just about started discussing children and undoubtedly, if unfortunately, we’re going to get into that dangerous territory of permissions for vaccines which have not even finished the basic protocols that the rest of the world demands.

Having held back vaccines for a week so that 2 crore (20 million) could be dispersed on one day, what else does Modi have to celebrate apart from turning 71? Happy Birthday for that personal milestone. The birthday present however is something that all of India has paid for. No favours there. And let’s not forget the proportion of Indians who have paid for their own vaccinations. Unlike many high capitalist societies where vaccines were free. You might add up that we’ve paid twice: once from our own pockets and once through our taxes.

So how exactly is this a birthday celebration for Modi? We pay for our own vaccinations, not enough of have been vaccinated, a vaccination scheme which is a vital part of a campaign against a dangerous virus has been slowed down to pump up a politician’s obsession with his image… Maybe Abraham Lincoln was wrong. Or we are just a nation of credulous dimwits.

Many years ago, when Mayawati as chief minister of Uttar Pradesh celebrated her birthday with a massive birthday cake which she shared with her supporters, there was smirking and manufactured shock at how people tore into the cake. The same sort of people, with absolutely no sense of either self-awareness or irony, applaud this great vaccination drive to celebrate Modi’s birthday.

Just how stupid they are that they will now believe that Modi really is India’s first prime minister remains to be seen.

Frankly though given our credulity levels, anything is possible. More fool us.

(The writer is an independent commentator. Views are personal)