West Bengal Elections and Reaching out to women voters 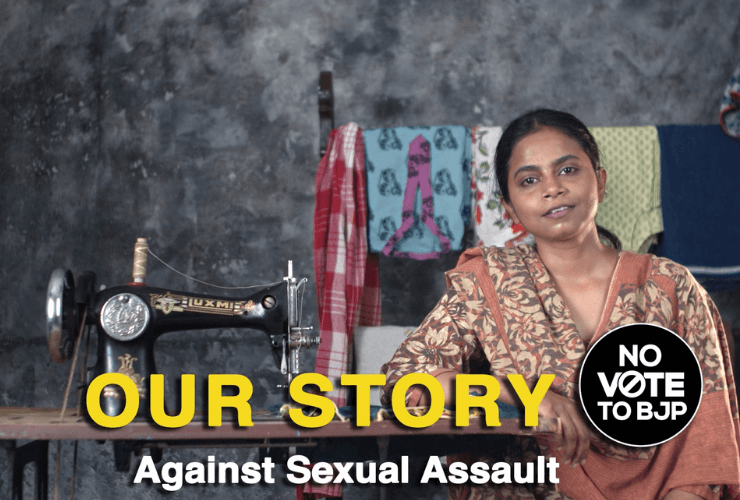 The ongoing 2021 Legislative Assembly election in West Bengal has spawned a campaign called ‘No Vote To BJP’, which includes messaging meant specifically for women in the state.

The campaign was launched by ‘Bengal against Fascist RSS-BJP’, a platform of multiple left, feminist and civil society movements, as well as like-minded citizens, that came into being in the first week of January 2021. Over the past few months it has been able to reach out to a considerable section of West Bengal’s voters during the high voltage election. The goal is not only to work towards the defeat of the Bharatiya Janata Party (BJP) in the state election but also to reduce its vote share. The campaign does not endorse any other political parties.

One of the main targets of the campaign is women voters. “Like any fascist force, the BJP is anti-woman. Data from BJP-ruled states confirms this. If they win this election, it will negate all the work feminists have done here. We will have to start from scratch,” says Satabdi Das, a feminist activist, writer, and convener of the No Vote To BJP (NVTB) campaign.

Maroona Murmu, a professor at Jadavpur University and an activist associated with the campaign, echoes this fear: “If the BJP comes to power in West Bengal, it will harm the nature of the state. We do not want to follow UP (Uttar Pradesh). That is certainly not a model state. We don’t want such anti-women forces in our state. Hence, this campaign is targeting women voters among others.”

Those associated with the campaign reveal a deep fear of a party whose leaders have been known to felicitate rapists and who regularly make misogynist comments. To counter this, NVTB has made several videos to complement the rigorous on-ground campaign, which highlight the BJP’s anti-women politics, amongst other issues such as the National Register of Citizens (NRC), the Farm Bills, and the economy.

For example, a video released by NVTB on April 2, titled RSS er Swarup (True Colour of RSS), details the sexist comments and ideas of the Rashtriya Swayamsevak Sangh (RSS) towards women. The video refers to the 1960 speech of MS Golwalker, the second sarsangchalak or chief of the RSS, in which he said that women from any caste should bear their first child with a Brahmin man before bearing more children with their husbands. The video also quotes the sexist comments made by the current RSS chief, Mohan Bhagwat, who said women marry to pleasure men in exchange for meals, as well as the Chief Minister of UP, Yogi Adityanath, according to whom women have to be guarded by the men in their lives. The video ends with the question: “They (BJP) are trying to capture West Bengal. If you are a woman or a man with a minimum respect for women, will you let them? “

Another video compares the rate of gender-based violence in Uttar Pradesh and West Bengal, based on data from the National Crime Records Bureau (NCRB).

A scroll through the NVTB’s Facebook page makes it clear that women voters are at the heart of the campaign. A majority of the videos highlight the plight of women in BJP-ruled states and raise the question of what will happen if the BJP wins in West Bengal.

According to Prof Murmu, these videos are also “intersectional in the way they bring in the class question.” For example, in the ‘Amader Katha’ (Our Story) series by NVTB, one of the videos depicts the plight of a female migrant worker. The long march back home endured by India’s migrant workers rendered jobless during the Covid-induced lockdown in 2020 mainstreamed the plight of this largely informal workforce compelled to dwell in the in-between zone of visibility and invisibility. But reports and discussions focused mainly on male migrant workers. So, for NVTB to showcase a female migrant worker requesting people not to vote for the BJP brings a much-needed rupture in the discourse on migration and labour.

According to Arjun Gourisaria, a film editor and activist associated with NVTB’s video team, while “It’s true that the majority of migrant workers are men, there are a lot of women migrant workers, too, across the country and their history keeps getting pushed aside. Women migrant labourers endure much worse situations. They go through the double burden of being a care-giver and a worker. During the lockdown, there were striking images of women workers with their children on their shoulders.” Gourisaria believes that the entire ethos of the RSS-BJP is anti-women. “So if we can use women as the face of the campaign anywhere, we will.”

There are a large number of registered women voters in West Bengal. The final electoral roll published by the Election Commission of India shows that the percentage of female voters in the state is 49.01 per cent. This makes West Bengal the fourth major state after Tamil Nadu, Kerala, and Andhra Pradesh, where female participation is high. To tap into that voter base the videos highlight gender based violence in BJP ruled states and other related issues that concern women.

The videos are supported by on-the-ground campaigns conducted by activists. According to Shreya Acharjee, an activist associated with the Progressive Democratic Students’ Federation (PDSF) and NVTB, “It is our responsibility to tell more and more women what is happening with women in BJP-ruled states and how the BJP and RSS view women. Not every woman watches videos on Facebook or WhatsApp, especially in rural areas. So when we go to districts for campaigning, we make sure we talk about these issues.”

The activists approach several issues from a gendered angle. One example is the National Register of Citizens (NRC). According to Satabdi Das, convener of the NVTB campaign, during their on-ground campaigns, and especially while talking to women, they often highlight a gendered perspective of the NRC. “We give them the example of the Assam NRC, which left a large section of women excluded from the list due to the non-availability of documents. Many did not have voter cards or school certificates or even their fathers’ names on many documents.”

In a patriarchal society like India’s, where women’s education and their own genealogy matter less than that of the men they are married to, it is often hard for women to trace documents to prove their citizenship as required by the NRC exercise. As many as 1.9 million people were excluded from the citizenship list in Assam.

“Using the Assam NRC exercise as a cautionary tale often resonates with working class women,” says Das. When it was raised during a campaign among domestic workers, she says, “They were intimidated. Most of them do not have their papers in order and, with their demanding workload and schedules, they cannot take days off (to apply for them).

According to Shreya Acharjee, women are also responding to the increase in the price of gas cylinders, an added burden when many women workers are still reeling from the effects of the prolonged lockdown.

The activists of the NVTB campaign find the responses of women heartening. Shilpak, another activist from PDSF and NVTB, has been extensively campaigning in Kalimpong, Alipurduar, Jalpaiguri, Nadia, North & South 24 Parganas, Howrah, and Hoogly. His reading of women voters from rural areas has energised many.

“The women are not happy with the aggressive masculinity of the BJP,” says Shilpak. “They are not accustomed to it. For them, that is not the Bengali culture. They think our culture gives respect to women. That statement is, of course, very problematic. Nonetheless, for them, BJP means disrespect for women.”

The activists also came across many women who are fed up with the radicalised men of their villages who chant ”Jai Shree Ram” and even arm themselves. This change in behaviour is gradually making them more aggressive and the women are not ready to welcome that kind of masculinity within their households.

“Women also cannot tolerate Dilip Ghosh (who heads the BJP in West Bengal) and his sexist comments. Many people in Kolkata might say that Ghosh is trying to attract the non-elite classes with his speeches and only elite women have a problem with them, but that is not the case in my experience,” says Shilpak. “Of course, a certain section of youth enjoys his speeches. But women do not, elite or non-elite. Maybe these women won’t vote for the incumbent Trinamool Congress due to large-scale corruption, but they are definitely not accepting the aggressive masculinity of the BJP.”

From the videos to social media to ground campaigns, the NVTB platform has managed to reach a wide section of women voters, which has led to the spontaneous involvement of women in the elections. According to Acharjee, a certain kind of mobilisation is always needed but India has just witnessed two huge movements in which women have been prominently involved – the anti-citizenship laws (NRC, the Amendment Act or CAA, and the National Peoples’ Register or NPR) movement and the ongoing anti-Farm Bills movement. “The stage was thus already set for women to come out and protest anti-people policies and laws. So when we started our campaign, many women spontaneously joined us,” Acharjee explained.

According to Shilpak, women formed a majority of participants at a rally organised by the NVTB platform on March 10. There was a call for “Kolkata Chalo” and people from many districts came to Kolkata for the rally. Saying that of the 300 people who came for the rally from the Sundarbans, around 250 of them were women. “This shows the campaign is having an impact,” he says.

“Women are not a homogenous category but the way the campaign is unfolding it will resonate with every class of woman. Be it urban students who will probably relate to videos that talk about the right to love and wear clothes of one’s choice, or be it working class women, like domestic workers, who are afraid of another lockdown, or the NRC, or the increasing gas price, the campaign has reached everybody,” added Afroja Khatun, an associate professor and feminist activist.

However, according to Prof Murmu, the campaign could be more inclusive while talking about gender. In her opinion it has captured the class perspective expertly but she feels that it can be more inclusive by bringing in women from a wider section of society and initiating a discourse with a wider range of actors not only from various classes but also different communities.

For all the activists of the NVTB and the independent citizens associated with it, this is just the beginning of a movement. The platform is not only relatively new one but it is operating with little humanpower and extremely thin financial support, run as it is mainly through crowd-funding. Despite its weaknesses and challenges – such as its inability so far to reach all the targeted places and sections of people – there is hope that a new democratic alternative may arise from the campaign and that, in the near future, post-election, the forum will solidify into a major anti-fascist movement.

Utsa Sarmin is an independent journalist, researcher and activist based in Kolkata. She has previously worked for Free Press Kashmir in Srinagar and teleSUR English in Ecuador as a journalist.