Poverty-stricken women in the semi-arid regions of West Bengal and Jharkhand, used to subsisting on meager incomes, have defied huge odds and transformed their lives by rearing goats and poultry 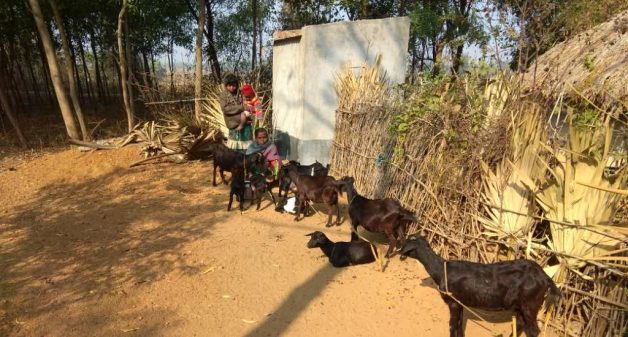 Tribal women in Birbhum have found an alternative source of earning by rearing goats. (Photo by Tagore Society for Rural Development)

Nityanagar, a remote village in Birbhum district of West Bengal, appears far removed from the rest of the world. The closest medical shop is 7km away. People living in the 40-odd houses are tribals. None of them have ever owned agricultural land or anything of worth, but their shacks.

A few years ago, many of the villagers used to migrate for at least three months, to labor in the fields or in the brick kilns of neighboring districts. The children accompanied their parents, so as to get proper food.

Poor living conditions and underpayments did not deter them. It was their only option. Back in their village, when they ran out of money, they subsisted the rest of the year with one meal a day, and sometimes, nothing at all. But since five years, their lives have been getting better.

Women like Swantana, Bashini and Sushila would say that all it takes to overcome such impoverishment are assets like goats and chickens that were worth Rs 7,000 in 2013. They are part of a self-help group (SHG) movement of 1,200 women. They have transformed their lives around through concerted efforts.

Poverty in the past

The women shuddered to think of their not-so-distant past. Food used to be the same everyday — watery rice with leafy vegetables collected from the forest. Anything else was an indulgence they could not afford with their meager income.

“With no work in the village, we used to walk 15 km to Khoyrasole forest to collect saalleaves,” Bashini told VillageSquare.in.“We made single-use saal leaf plates and sold them for a pittance.” The women used to leave by six in the morning, packing a little rice and return after 12 hours.

“We used to make grass brooms that took days to dry,” said Swantana. The effort earned them Rs 5 per broom. As everyone made brooms, they did not have a say on the price. After working for about 12 hours, they hardly earned Rs 10 a day. The men, who hardly worked, took the wife’s hard-earned money and spent on country liquors such as mahuaor haria.

“Our children could never taste dry rice; it was always watery,” Sushila told VillageSquare.in.“We could not even give them food every day.” Often the women went without food, giving the children whatever they had.

“When I first visited the area many years ago, I saw boys and girls as old as 12 and 13 years going about stark naked, because they didn’t have extra clothes,” Dipankar Roy, director of Tagore Society for Rural Development(TSRD), told VillageSquare.in.Most of the women in Nityanagar had just one sari. After bathing, they would wear one half of it while holding the other half in the air to dry. Men went about in loincloths.

Though the situation is not so bad today, it has not improved much. People still subsist on an income of Rs 12 per adult per day, while the national criterion for poverty is Rs 26.

In 2012, TSRD started a project called Step-Up, with the support of European Union, to help women from the poorest households earn with work they were familiar with.

TSRD trained 1,200 women from the arid zones of Rajnagar administrative block of Birbhum in West Bengal, besides Kundahit block of Dumka districtand Raniswar block of Jamtara districtin Jharkhand. While women in other places took up weaving, stitching, handicraft or agriculture, the 15 women selected from Nityanagar opted to rear goats and chickens.

The women finally got rid of their apprehensions, after lengthy meetings for months. But when the men learnt that the women would not only be the recipients of the aid but they would only handle the finances, they vehemently opposed. The situation was almost the same in all the villages.

As customs prohibited women from talking to men outside their families, they could not convince them. But they could foresee an opportunity through the new ideas; they could visualize their children going to school. So each woman parleyed with her husband. It took them almost a year to convince the men. 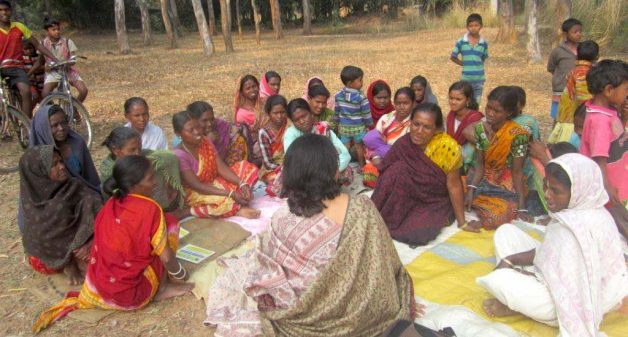 A meeting of a women’s self-help group. (Photo by Tagore Society for Rural Development)

“Men did not understand and feared losing the reins,” Swantana told VillageSquare.in.The new development threatened longstanding customs and financial decision-making. The men went to every length to foil the women’s plans.

They got together, vilified, and physically prevented their wives from attending meetings, besides threatening TSRD coordinators. Local politicians questioned the intentions behind involving women in money matters.

But the women stood firm in their resolve through all confrontations. They grouped themselves into SHGs and finally brought home their assets – a couple of goats, some chicks and some ducklings.

Women on their own

Gone are the days when they were desperate to be hired as labor. Five years after starting their SHGs, the situation is different. The goats and poultry have grown exponentially.

The two goats that each woman received have become a herd of 15 or so. The women have built bigger pens and coops. Now they have added cows to their herd, bought from their earnings.

They sell milk, eggs and poultry regularly and goats when the animals mature. The women, hardly literate, manage the finances accurately. They have mastered the art of negotiation with the traders. They need not go to the marketanymore; the buyers come to them.

TSRD has trained some women in para-veterinary work to ensure the health of livestock and poultry. They now know about medication, vaccines and vitamins, and can administer injections.

Each SHG has a savings account; everyone deposits Rs 100 every month. They try to save in their individual accounts also.

The Nityanagar account has crossed Rs 1 lakh. Members take loans from the account for business or emergency and return it in a stipulated time with a 10% interest. If someone fails, the group comes to the woman’s aid.

This has freed them from the clutches of moneylenders, who at times of crisis used to charge interest as high as 50%. If they could not pay on time, the moneylenders, usually big landholders, forced the women to work for free.

“We kept paying, yet the debt never seemed to end,” said Sushila. With their own deposit in the bank, they have broken the vicious cycle of debt. They take care of their needs with their own money.

Roy said that the present aggregated balance of all the SHGs of 1,200 women has crossed Rs 25 lakh. “They can now employ a manager if they wish to,” he told VillageSquare.in.

The children now go to school and private tuitions too. Previously the families could not afford to buy even a bar of soap, let alone educate their children. “Now our children get to eat eggs and drink milk regularly,” Sushila told VillageSquare.in.“It was unthinkable before.”

Bashini does not want to think of the disconsolate past. They do not go to the forest anymore. “We no longer collect wild leaves to cook, because we eat proper meals,” she said.

The women now fulfill the financial needs of their husbands too. “I bought my husband a motorcycle,” said Swantana shyly.

The men now help take care of the children, animals and poultry. They even cook when their wives are away, attending meetings. “Now that we understand our women’s work, we support them,” Sushila’s husband Chandi Kora, seated in his hut that now has a kitchen and a toilet, told VillageSquare.in.

The women too make decisions nowadays and the men comply. “We were a scared lot earlier, but now we have gained confidence and belief in our strength,” said Swantana.

Gautam Sarkar is a documentary scriptwriter and filmmaker. He makes films on social and rural themes.