Westinghouse to get new site for Indian nuclear plant #WTFnews 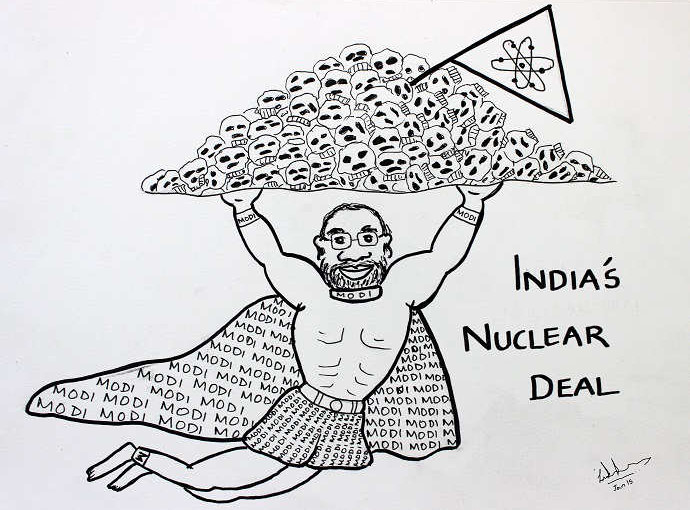 By Douglas Busvine and Rupam Jain

The six AP-1000 reactors would be built in the southern state of Andhra Pradesh, after the original site proposed for the multi-billion-dollar project, in Prime Minister Narendra Modi‘s home state of Gujarat, faced local opposition.

The breakthrough comes ahead of a June 7-8 visit by Modi to Washington, where he will be hosted by President Barack Obama for a final summit before the U.S. presidential election in November, and will address both houses of Congress.

U.S. lawmakers ratified the civil nuclear accord three years after it was struck in 2005, as part of an attempt to deepen the strategic relationship with India, but have expressed growing dismay over its failure to yield follow-on deals for U.S.-based reactor makers like Westinghouse.

One obstacle was bringing India’s liability rules into line with international norms, which require the costs of an accident to be channeled to the operator rather than the maker of a nuclear power station.

But, following the announcement of a “breakthrough understanding” on nuclear cooperation during Obama’s visit to India in January 2015, this issue has been resolved to the satisfaction of the U.S. government and it is down to commercial partners to agree a deal.

Analysts say resolving the land issue is a crucial step, but complex issues remain, including project financing and reaching a civil nuclear pact with Japan, where Westinghouse parent Toshiba is based.

“Some time before the end of the calendar year they may be able to close,” said Ashley Tellis, a senior associate at the Carnegie Endowment for International Peace, who was a negotiator for the George W. Bush administration in the U.S.-India nuclear talks.

India wants to dramatically increase its nuclear capacity to 63,000 MW by 2032 to meet growing demand and restrict its reliance on fossil fuels, and has struck a series of accords with other countries to help meet that goal.

Indian federal and state officials confirmed that NPCIL, which would operate the plants, had made a down payment on 2,000 acres (800 hectares) of land in the eastern coastal district of Srikakulam.

“The land acquisition was stuck for over a decade, but now it’s coming to a conclusion,” Ajay Jain, energy secretary of Andhra Pradesh, told Reuters, adding the purchase would close this year. “Construction can begin in 2017.”

Ninety percent of local farmers had agreed to sell their land, they were being well compensated and no court cases were pending, Jain added.

Two sources, requesting anonymity due to the sensitivity of the matter, confirmed that the site was being acquired for Westinghouse, which plans to build six AP-1000 pressurized water reactors, each with a design capacity of around 1,100 megawatts.

Westinghouse did not respond to requests for comment, while senior executives at NPCIL were not available.

Westinghouse CEO Danny Roderick told Reuters earlier this year that an Indian reactor deal was close, but negotiators missed a deadline to wrap it up before Obama hosted a nuclear security summit in Washington in April.

Westinghouse was originally offered a site at Mithi Virdi in Gujarat, on India’s west coast, but encountered opposition from local fruit farmers.

A nuclear joint venture between General Electric Co (GE.N) and Hitachi (6501.T) meanwhile showed no interest in India’s offer of land for a plant in Andhra Pradesh, opening that option to Westinghouse.

Andhra Pradesh has had more success in acquiring land for development than some rival states, acquiring tracts of land for a new state capital by offering farmers future plots developed for commercial or residential buildings, as well as cash, in compensation.

The state is also proposing its own land law to speed up acquisitions after Modi’s efforts to get a new law through parliament failed soon after he rose to power two years ago.