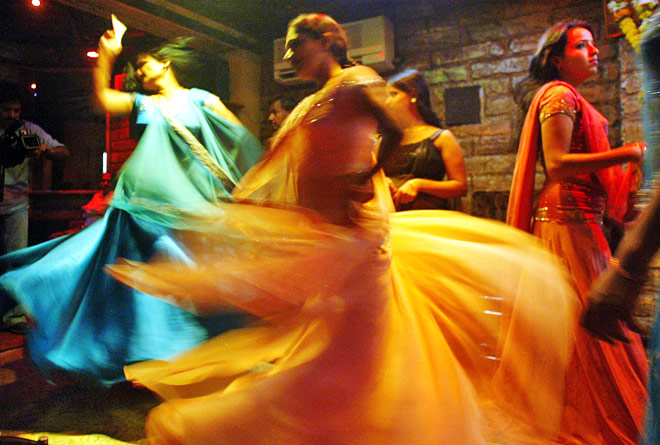 Anu Mokal wasn’t breaking the law when she was out walking with her friend last year, yet to the police, her very existence was criminal. As a sex worker in the Indian state of Maharashtra, she lives under various laws aimed at criminalizing the sex trade, supposedly to protect women from exploitation. But it was the law that became her assailant that day when a police officer viciously attacked her, hurling insults and beating her severely.

Mokal pleaded that she was pregnant, but—according to Meena Seshu, founder and general secretary of SANGRAM, a sex workers’ rights and anti-HIV/AIDS organization—the officer accused her of lying and said sex workers had “no right to be mothers.” A few weeks after the assault, she miscarried.

India has not outlawed sex work itself, but sex workers face various restrictions on related activities such as soliciting in public or pimping. The law had left her defenseless, however, against the violence of the state. Fortunately, another advocate stepped in on her behalf: SANGRAM and its affiliated sex worker activist collective, Veshya Anyay Mukti Parishad (VAMP). The activists demanded that Maharashtra politicians investigate the beating and institute reforms, including a grievance commission to address abuses of sex workers’ human rights.

Mokal’s brutalization might seem like just a product of local police corruption or culturally embedded prejudice. But the attack echoed a deeper culture of oppression that sex workers face around the world at all levels of society, not just in the streets but in the social institutions that are supposed to protect them. Beyond the officer’s blows, this insidious political assault against sex workers even permeates the work of international humanitarian programs—funded in large part by the foreign aid that pours into the Global South from Washington’s coffers.

An obscure directive embedded in PEPFAR, the White House’s keystone global HIV/AIDS program, has for years explicitly barred U.S. support for any organization that aids sex workers. As it was originally written, the legislation dictated that in order to qualify for PEPFAR funds, both U.S.-based and overseas NGOs must actively pledge that they do not support prostitution. Though the actual implementation of the pledge has been stalled by years of litigation and a recent Supreme Court decision, it has nonetheless pressured both U.S. and international organizations to restrain their programs for sex workers for fear of the financial consequences. Advocates argue that the pledge effectively penalizes groups working with extremely vulnerable communities, leaving countless sex workers deprived of critical services and social supports.

Fortunately, the Supreme Court recently dealt a potentially lethal blow to the so-called “anti-prostitution loyalty oath” by ruling that the mandatory pledge violates the free speech rights of U.S. organizations. But there’s a catch: The court’s ruling applies only to U.S.-based groups. The law still looms large over the Global South, where international aid dollars continue to mold the political discourse on sexuality. Grassroots groups based in the Global South thus continue to face a financial penalty simply for rejecting Washington’s policy of condemning and shunning sex workers.

SANGRAM, which has established itself as a leading regional HIV/AIDS service group as well as a grassroots organizing network for thousands of sex workers, has proudly defied PEPFAR, though the U.S. remains a major funder of HIV/AIDS programming in India. The group turned down an annual grant of $20,000 allocated by a U.S. funder, Avert Society, out of concern that the State Department might interfere with Sangram’s pro-sex worker rights campaigning and peer-education efforts. (The group continues to receive funds from other international donors like the American Jewish World Service.) But with or without U.S. aid, it faces a political climate suffused with the pernicious pressures of America’s “soft power.”

When aid comes with political strings attached, poor governments are pressured to mirror Washington’s culture wars. “This loyalty oath has had a tremendous impact globally,” says Seshu. “Not only in terms of an aid conditionality vis a vis funding, but an aid conditionality that meant that there was something hugely wrong with working with sex workers or working with issues of sex workers.”

According to a 2012 study by the Journal of the International AIDS Society, published before the Supreme Court decision, groups have refused PEPFAR funds in order to avoid potential political meddling in their activities. Other organizations have sought to alter or restrict programs dealing with sex worker communities: for example, an established NGO might cut resources for an affiliated sex worker health project. Or a small grassroots grantee might refrain from publicizing sex worker condom-distribution programs. Overall, researchers found, groups felt pressured to limit programs that might be viewed as supportive of sex work, even as sex workers continued to suffer some of the worst effects of the epidemic.

While the court ruling has spared U.S.-based groups from these restrictions, non-U.S. grassroots groups like SANGRAM are still subject to PEPFAR’s moralistic anti-prostitution dictates. Across the Global South, the politics of PEPFAR ironically feeds into the same structural barriers that put sex workers at risk of AIDS and other social threats. By marginalizing an “underground” labor force, the humanitarian aid system perpetuates the social disenfranchisement of sex worker communities, exposing them not only to disease risks, but also a culture of discrimination and oppression.

From criminalization to empowerment

SANGRAM’s philosophy offers a counterpoint to Washington’s puritanical policies. Seshu argues that empowering sex workers is a critical aspect of strengthening public health and fighting the HIV/AIDS epidemic. But the converse, she argues, is equally important: Since the sex work sector is a core risk group, the global movement against HIV/AIDS could finally force humanitarian institutions to recognize sex workers’ rights.

“HIV has been a good entry point because governments are scared of HIV,” Seshu explains, so advocates can then say: “Listen, this entire HIV/AIDS program rests on the shoulders of sex workers, and key populations [targeted by aid programs]. And so if you’re dependent on key populations, then you better listen to them.”

In India, efforts to control the HIV/AIDS epidemic are not the only arena where the public interest gets hijacked by conservative agendas. Sex workers’ rights issues have also come to the fore in the public discourse over sexual violence and oppression of women, in the wake of the horrific rape and killing of a young woman in New Delhi. Still, while advocates hope the outrage over the Delhi rape case will force the government and society as a whole to confront gender inequality and sexual violence, sex workers still struggle for political visibility, even amid a national debate over gender justice. The language of a recently proposed anti-rape bill, for example, based on recommendations of a commission established amid public outcry over the Delhi rape, is still inlaid with stereotypes of sex workers as either criminals or victims. India’s National Network of Sex Workers condemned a provision that fails to distinguish between sexual exploitation and “voluntary and consenting sex workers.”

In the public dialogue on rape as well as on HIV/AIDS, political initiatives aimed at promoting gender equity often end up degrading the dignity of some of the most vulnerable women, simply because of how they earn a living. The pervasive stigma, Seshu says, “makes the sex workers themselves believe they’re criminal… You have to work with the communities, to teach them, `You have a legitimate right to a voice.’ You have to help communities exercise that voice in both policy-making bodies and within the local self-government levels. So it’s a multilayered kind of political process.”

When SANGRAM rejects discriminatory foreign aid policies, or stands up to the police, they are resisting a global ideological regime that views them as a social scourge, not agents of social change. In India’s heated politics of sex, violence and public health, the treatment of sex workers represents deep blindspots in even the best-intentioned social policies. That’s why women like Mokal can only be protected by becoming empowered, and no amount of aid will save them as long as they are denied a voice.

Michelle Chen is a contributing editor at In These Times, a contributor to Working In These Times, and an editor at CultureStrike. She is also a co-producer of Asia Pacific Forum on Pacifica’s WBAI. Her work has appeared on Alternet, Colorlines.com, Ms., and The Nation, Newsday, and her old zine, cain. Follow her on Twitter at @meeshellchen or reach her at michellechen [at] inthesetimes [dot] com.