What Kind of Prime Minister Are You, Sheikh Hasina?

Written by Javed Anand | in SabrangIndia 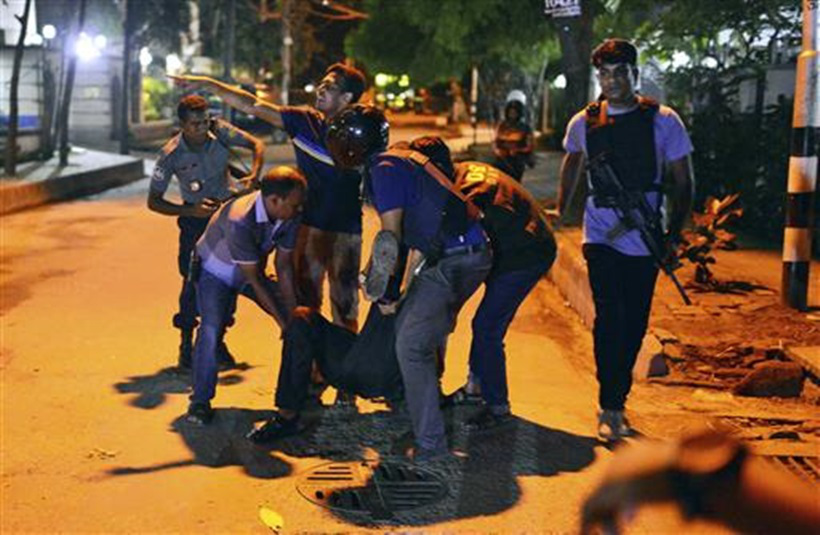 To combat growing terrorism in Bangladesh the PM’s lament over, ‘What kind of Muslims are these people?’ is not enough.

The heinous massacre of innocent men and women peacefully eating their dinner at an up-market café in Dhaka this weekend has at last woken up Sheikh Hasina Wajed to the continuing reign of terror – in Allah’s name – in the country of which she has been prime minister (for the second time) since 2009. Or so we hope.

Eyewitness survivors have said the killers stormed the popular Holey Artisan Bakery in Dhaka’s posh Gulshan area on Friday evening shouting “Allah-o-Akbar”. “What kind of Muslims are these people? They don’t have any religion… terrorism is their religion,” the prime minister is reported to have stated while announcing the end of the siege which claimed 20 lives.

Begum Hasina would do better to ask herself the question that millions of Bangladeshi citizens have been asking in their own manner for many months now: What kind of Prime Minister are you, Begum Hasina? What kind of Islam do you profess and what does it demand of you?

For the past year-and-a-half her government and police have been mute witness as terrorists have picked their targets at will, one at a time, killing Hindu priests, Shias, Ahmeddiyas, Sufis, Pirs, secular activists, atheists, bloggers, writers, professors, students… One of them was a young student named Nazimuddin Samad. His crime? Organising campaigns for secularism on Facebook.

In an article published on this platform less than two months ago, Bangladesh’s feminist activist Khushi Kabir had pointed to her country’s dangerous drift towards extremist Islam: “The message that there is only one form, a form alien to this land, of belief and practice, that of the Wahabi/Salafis who are not part of the four Mazhabs of the Islamic Sunni belief is now being pushed with full force as the current agenda. Many killed in brutal manner have been believers, Pirs, Shias, Ahmedias, followers of the Sufi tradition, priests from other religions, writers who were not necessarily atheists”.

Kabir had lamented the Hasina government’s myopia over the dark clouds gathering over Bangladesh and the state’s callous naming of the victims as the accused: “Those feeling outraged at this [ongoing] barbarism are asked that one should be careful not to hurt the sentiment of the believers? Whose sentiment are we talking about? Which believers? The misogynists, communalists who preach and breed obscurantism, a group financially strong, having the backing of the powers that be, misrepresenting and misquoting for their own vested interests?”

Kabir had concluded her article with the words: “1971 has taught us that killing cannot stop freedom. It did not then, it will not now”. Her brave words, sadly, have not stopped the Islamists from their murderous misdeeds.

Social activists like Kabir are not the only ones concerned over the cancerous growth of extremism in the country’s body polity. The Dhaka Tribune reported on June 6 (2016) that over 1,00,000 ulemafrom Bangladesh had issued a joint fatwa against terrorism.

ISIS and the Al Qaeda are currently engaged in a fierce competition across our sub-continent aiming to outdo each other in spreading their terror tentacles. That’s now. But the malignant growth of Islamist extremism in Bangladesh can be easily traced back to the Jamaat-e-Islami (JEB) and its militant student wing, Islami Chhatra Shibir.

The Islamic State which has claimed “credit” for the latest mass murder at Holey Artisa Bakery has also boasted of targeting others in recent months. It and the Al Qaeda are currently engaged in a fierce competition across our sub-continent aiming to outdo each other in spreading their terror tentacles. That’s now. But the malignant growth of Islamist extremism in Bangladesh can be easily traced back to the Jamaat-e-Islami (JEB) and its militant student wing, Islami Chhatra Shibir.

The official website of the JEB continues to protest its innocence, claiming that “Islamists are the most principled, pious, god-fearing and kind people on the earth”. Facts on the ground tell a different tale.

The demands of the terrorists in the latest carnage included the release of Jamaat-ul-Mujahideen Bangladesh (JMB) activists who were sentenced to a 10-year jail term in January this year for their role in a string of bomb attacks in the country in 2005. The JMB which is now a local ISIS affiliate is committed to converting Bangladesh into an Islamic state through armed struggle. On August 17, 2005 it had detonated some 500 bombs, simultaneously across 300 locations in 50 Bangladeshi cities.

While the origin of the JMB in the late 1990s is shrouded in some mystery, the Jamaat-e-Islami Bangladesh (JIB) has been accused of patronising the former while it was part of the coalition government headed by the Bangladesh Nationalist Party (BNP). In November 2005, a BNP MP, Abu Hena alleged that the JEB was directly involved in the emergence of the JMB. He even named two JEB ministers in the BNP-led coalition who he claimed “are doing everything for the militants”. Hena’s expulsion from the party did not stop BNP’s former minister Oli Ahmed and BNP whip Ashraf Hossain from speaking out and implicating the Jamaat-e-Islami in the rise of extremism in the country.

Recall the vibrant ‘Shahbag movement’ of 2013 (many at the time drew parallels to the ‘Arab Uprising’) which started as a vehement rejection of the International Crime Tribunal’s (ICT) verdict to condemn Abdul Quader Mollah, assistant general secretary of Jamaat-e-Islami, to life in prison. Protestors wanted Mollah, who was convicted for killing hundreds of people and raping a young girl, to be put to death. But the movement soon took the form of a mass civil society awakening which demanded an end to all religion-based politics.

Sheikh Hasina Wajed, Prime Minister of Bangladesh (since 2009) has been leader since 1981 of the Awami Party which spearheaded the country’s 1971 breakaway from Pakistan, rejected the two-nations theory and espoused the ideal of a secular nation and state. Even in this dark moment it should be clear that there are millions of Bangladeshis – from students, professors and activists to a wide spectrum of maulanas wedded to a tolerant Islam – who are staunchly opposed to the Wahhabis/Salafi and the Maududian “enemies of Islam” determined to push the country towards a totalitarian Islamic state. In 2013, the Supreme Court declared the JEB as “illegal” and barred the party from contesting polls. In the past it had never managed more than 4 per cent of the votes in any election in Bangladesh.

So, to return to where this article began, before the terrorists claim their next victim(s), Sheikh Hasina would do well to ask herself: What kind of a Prime Minister am I? What does my Islam demand of me?