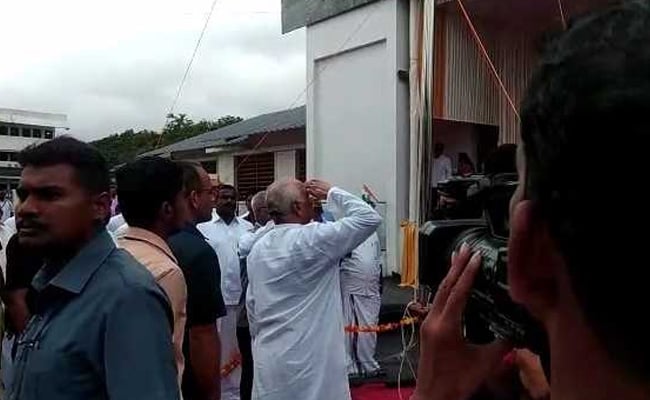 –  Brinda Karat
On the 70th anniversary of independence, two incidents took place at opposite ends of the country, one in Kerala and the other in Tripura, which symbolize much of what is wrong with the functioning and approach of the present central regime and the politics it represents.

Let’s take the incident in Kerala first. Mohan Bhagwat, the RSS chief decided, that he was going to hoist the national flag in Kerala in a government-aided school in Palakkad district. There are certain protocols and rules that the central and state governments follow for the hoisting of the flag on ceremonial occasions.

In Kerala, too, the concerned department issued necessary instructions on August 5, 2017, that Independence Day should be celebrated appropriately in all educational institutions. It stated that the national flag should be hoisted by the head of the institution.
This is a perfectly rational order and the state government is well within its rights to issue such an order. Mr. Bhagwat is not the principal of the school. The institution Mr. Bhagwat heads is far away in Nagpur. But Mr. Bhagwat chose to violate this order.
The UP government headed by Mr. Bhagwat’s chosen Chief Minister, Yogi Adityanath, had also issued a circular. It concerned the raising of the national flag followed by the singing of the national anthem in all madrassas in the State.
They were warned of strict action if instructions were not followed. Principals were asked to film the function as evidence that the government’s instructions were being followed.
As most of the press reported, this, in any case, what was being done for years in all UP schools including madrassas on Independence Day but it is quite normal for those inspired by Hindutva ideologies of the RSS to present a picture of minority-run institutions having to be coerced into respecting national emblems.

In UP, it was a highly-motivated circular; in Kerala, it was a normal one; but the governments of both states have every right to ensure its implementation. In Kerala, the order applies to everyone, not just Mr. Bhagwat. There was nothing to stop him from hoisting the flag at any other public place. So there is no question of Mr. Bhagwat being restrained from hoisting the flag as some media channels and papers have reported. No, Mr. Bhagwat is not the victim.

The question arises of why the RSS chief should come all the way to Kerala just to break a rule set by the state government. It is no secret that the RSS had strongly opposed the decision of the constituent assembly to choose the tricolor as the national flag.

It took 52 years after independence for the national flag to be unfurled by the RSS, and that too, only after the Vajpayee government took office. On the eve of independence, the official mouthpiece of the RSS, the Organiser, carried an article that stated “the people who have come to power by the kick of fate may give in our hands the tricolor but it will never be respected and owned by Hindus. The word three in itself is evil and a flag having three colors will certainly produce a psychological effect and is injurious to a country.”

The RSS has never disowned this understanding or its preference for the saffron flag as the national flag. So it was not love for the national flag which made Mohan Bhagwat go to that school in Kerala. What was he trying to prove?

That he is so powerful with his pracharak as Prime Minister that he can scoff at the orders of a state government which does not owe allegiance to his organization. In the context of the manufactured lies regarding the so-called victimization of RSS men by communists in Kerala, the RSS chief was being deliberately provocative against the LDF Government. It is a deliberate insult to the state government.


But that is not the only rule he broke. The second rule he violated concerns the national anthem. This time it was a rule of the central government. In 2002, the Vajpayee government adopted the Flag Code of India which specifies a detailed list of Do’s and Dont’s regarding the flag code and the conduct expected during ceremonial occasions.

It was considered totally unnecessary by many at the time, but it became the rule of law. It has three parts. The second part details how educational institutions have to conduct ceremonies involving the unfurling of the flag.
In section 2 clause 2.3 vi, it says “Flag salutation will be followed by the national anthem. Parade will be kept at attention during this part of the function.” But what happened in the Bhagwat-led function? It was not the national anthem, but Vande Mataram that was sung.
It was only after the assembly had started dispersing that suddenly someone reminded the school’s administration that the national anthem had not been sung! Everyone was called back and it was then sung. So much for the respect the RSS has for the national song.

In Tripura, it was another story. Here, the central government was directly involved in insulting an elected Chief Minister. Manik Sarkar, the Chief Minister, recorded his speech for broadcast on Independence Day with Doordarshan and All India Radio as is the usual practice.

Shockingly, these organizations tried to censor his speech. When he refused to change a single word of it, the agencies refused to broadcast it. The letter sent to the office of the State AIR authorities states “..keeping in view the sanctity and solemnity attached with the occasion the broadcast is meant for the CEO Prasar Bharati was also consulted and the collective decision taken at Delhi advise that the broadcast may not go with its existing content.”

Manik Sarkar’s speech, available on the CPI(M) Facebook page, upholds constitutional values. It also posits the state government’s initiatives as opposed to the anti-people policies of the central government.

Mr. Modi made certain claims. He criticized all governments before his as being corrupt. That is acceptable. But if an elected Chief Minister seeks to project the policies of his government, that is not allowed. This is the real face of the “cooperative federalism” that the Prime Minister claims to have established.
Who is this collective sitting in Delhi that has been given the power to stop the broadcast of a Chief Minister?Clearly the central government is trampling on the autonomy of DD/AIR and Prasar Bharati by such outrageous acts of censorship. This is an insult to the people of Tripura and to the rights of states.

While the Prime Minister was speaking from the ramparts of the Red Fort on democracy and good governance, on the ground, on that very day, these two incidents symbolized the wide gap between the hype and the reality.